The Center for Arbitration and Conciliation, Bogotá Chamber of Commerce (CCB), is one of Latin America’s oldest and leading arbitral institutions. CCB is located in a privileged location in the heart of the Americas, in one of the most important business hubs of the region (Bogotá, indeed, has a larger GDP than a few Latin American countries put together), and easily accessible through South America’s best airport.

CCB administers international arbitration cases in the three main languages of the western hemisphere: Spanish, English and Portuguese. Its multilingual secretariat is not only experienced in CCB International Arbitration, but also in investor-state arbitration and even in wider international litigation, such as interstate dispute settlement before the International Court of Justice. CCB also administers ad hoc arbitrations under the UNCITRAL rules.

CCB’s List of International Arbitrators includes not only prominent Colombian arbitrators (Eduardo Silva Romero, Fernando Mantilla Serrano, Enrique Gómez Pinzón and Eduardo Zuleta, among many others), but many of the world’s leading adjudicators and international arbitration practitioners – a total of 62 notable names.

A percentage of its international arbitration proceedings are conducted outside Bogotá, although the majority of cases hold hearings and meetings at CCB’s state-of-the-art arbitration building in Bogotá’s financial district.

CCB’s International Arbitration Rules, which are largely based in the UNCITRAL Rules, include additional procedural advantages, especially in the fields of technological and digital means in international arbitration, and non-compulsory written or oral phase of proceedings.

CCB also maintains a Knowledge, Studies and Research Department, through which it has consistently been regarded as the leading exporter of ‘know-how’ to arbitral institutions in Central America, the Caribbean and South America. CCB regularly organises academic events with leading global international arbitration programmes such as American University – Washington College of Law, Universidad del Rosario and Georgetown University.

Cases range from commercial contracts to great infrastructure (construction) projects, and include foreign investment and societal-control disputes. Parties hail from North America, Asia, Latin America, Europe and Asia – in fact, many of the cases share no connection to Colombia in terms of parties, their representatives or applicable law.

In 2017, roughly 470 (domestic and international) arbitration proceedings were instituted. In international arbitration alone, for the first quarter of 2018, disputes amounted to US$11 billion.

CCB is headed by Dr Mauricio González Cuervo, former Chief Justice of one of Colombia’s highest courts, who has embarked upon the task of fostering dialogue between the judiciary and arbitration community in Latin America. 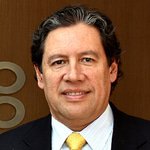