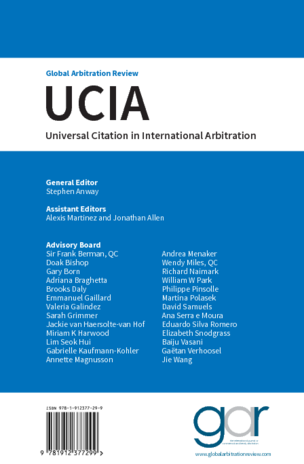 "This elegant little book should be an essential reference for anyone interested in international arbitration."
– Jonathan Entin, emeritus professor of law, reviewing UCIA in the George Washington International Law Review
Click here for full review

Which citation format shall I follow in my memorial?

Stephen Anway, General Editor of UCIA, states: “Despite the inconsistency in citation practices in the past, top practitioners in our field have started to follow a developing convention on style and citation. This developing trend is the product of a slow assimilation process: different practitioners and arbitrators bringing forward their own practices in case after case, learning alternative approaches from that process, and modifying their practices to fit expectations in future cases. Through this assimilation process, the beginnings of a convention on citation have slowly started to emerge. The rules in this manual reflect that developing convention. UCIA is intended for use in all writings related to international arbitration – from memorials to awards, from scholarly articles to student briefs. Although drafted in English, UCIA can be applied in proceedings in other languages. To facilitate its use, we have attempted to draft UCIA in a simple and easy-to-understand manner, eschewing rules that are unnecessarily technical or nuanced. Woven throughout are examples, located in shaded boxes underneath the rules to which they relate, showing practical application of the rules. This common-sense approach is intended to make UCIA more useful to practitioners from a wide range of backgrounds and legal cultures.”

A GAR subscription is required to download a PDF. Subscribers will receive copies as part of their subscription and can also purchase additional copies. Non-subscribers can purchase print copies.

Stephen Anway is a partner in Squire Patton Boggs’ international dispute resolution practice group and co-head of the firm’s investment treaty arbitration practice. Over the past decade, Stephen has acted as lead or co-lead counsel for the winning party in many of the largest international arbitrations in the world. He has worked in more than 25 countries and has represented clients - including nine different sovereign nations and numerous foreign investors - in some 75 international arbitration proceedings, including arbitrations brought under more than 10 different investment treaties, free trade agreements, and the Energy Charter Treaty.

Alexis Martinez is a partner at Squire Patton Boggs who has practised as an advocate in international arbitrations since 2003. Qualified in both France and England, and fluent in English, Spanish, and French, his experience straddles both common and civil law systems, and public international law. His investment treaty arbitration experience involves acting for claimants against states in 11 cases in Latin America, Africa, Asia, and the Caribbean, all of which resulted in favourable multimillion-dollar awards or settlements.  Moreover, he has represented defendant states successfully in multiple cases, including Slovakia, the Czech Republic, and Uzbekistan.

Jonathan Allen has been the chief subeditor at Law Business Research, GAR’s publisher, for over a decade.

He read English at the University of Oxford, and French and Italian at the universities of London and Siena. He holds a graduate diploma in Law from BPP Law School and a postgraduate certificate in Business French from the Paris Chamber of Commerce.

Jonathan manages a team of dedicated and talented copy-editors whose aim is to ensure the legal texts we publish are as accurate, clear, concise and readable as possible.