A new boutique founded by leading Swiss and Korean practitioners, which also has footholds Singapore and Australia

Peter & Kim was launched at the start of 2020 by two prominent international arbitration lawyers, Wolfgang Peter of Switzerland and Kap-You (Kevin) Kim of South Korea. The new boutique is exclusively dedicated to arbitration and arbitration-related litigation.

Peter is a leading counsel and arbitrator who co-founded the Swiss firm now known as Python in the 1980s. He worked there for 34 years before breaking away with a team in 2015 to launch his own GAR 100 boutique, Peter & Partners.

With a background in M&A law, Peter was counsel in a seminal ICC case in the 1990s concerning the break-up of Arthur Andersen. These days he is much in demand as an arbitrator – he recently chaired a panel that ordered Bulgaria to pay €600 million to a Russian state entity in a politically sensitive dispute over a nuclear power plant.

Peter brought his entire team over from Peter & Partners, including partners Christoph Brunner, Daniel Greineder (an English-qualified barrister) and Konstantin Christie; and of counsel Julia Xoudis. All are based in Geneva save for Brunner, who is in Bern.

The new firm has a Sydney office headed by partner Jim Morrison, another former Bae Kim & Lee practitioner who had been an independent practitioner for the last few years. It has also opened a Singapore office led by Charis Tan, a former Eversheds practitioner who brings experience in investor-state disputes and public international law.

The firm has offices in Geneva, Bern, Seoul, Sydney and Singapore.

While it’s early days for the new firm, the track record of its name partners is formidable.

Peter has been acting for the National Iranian Oil Company (NIOC) in a highly sensitive multibillion-dollar dispute with the Israeli government over an abandoned oil pipeline joint venture that has spawned at least three arbitrations and various French and Swiss court actions over more than two decades.

As part of that dispute, Peter and his team helped NIOC secure a US$1.1 billion award in 2015 against an Israeli state-owned entity in compensation for oil shipments pre-dating the Iranian revolution of 1979. They have since helped NIOC fend off a challenge to the award in the Swiss courts.

While at Python, Peter and his team helped Turkish client Doğuş defend an UNCITRAL award against a Ukrainian state railway company, obtaining a landmark ruling from the Swiss Supreme Court in 2014 on the res judicata effect of foreign court decisions on Swiss-seated arbitral tribunals.

They have also acted for major European energy conglomerate in several gas-price reviews worth more than €1 billion.

While at Bae Kim & Lee, Kim’s case work included defending the Korean government against a US$5 billion ICSID claim brought by US private equity firm Loan Star Funds, and acting for Hyundai Heavy Industries in a US$2.3 billion ICC dispute.

Among his last cases before leaving Bae Kim & Lee, Kim helped Hyundai Heavy Industries settle an US$8.4 billion ICC claim it brought by Qatar Petroleum over repairs to an offshore gas project.

He also acted for state-owned Korea Electric Power Corporation in a US$500 million LCIA dispute with a Hyundai-Samsung joint venture over the construction of a nuclear power plant in the UAE.

The firm reports it is acting in an ad hoc gas purchase dispute in the Middle East worth over US$30 billion; and is joint lead counsel to a methane gas exploration company in a joint venture dispute with major Asian state-owned enterprises. The latter dispute is governed by Chinese law and worth US$1.8 billion.

Peter has been sitting on a tribunal hearing a case over a multibillion-dollar metro project in Qatar. 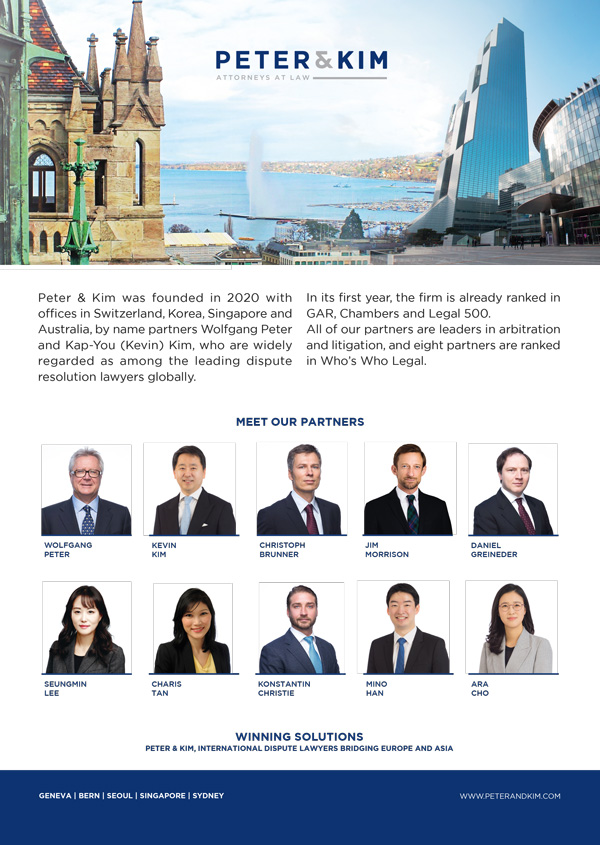