Russia and Libya are among the Swiss firm’s state clients

Created in 2000 through the merger of Schellenberg & Haissly in Zurich and Brunschwig Wittmer in Geneva, Schellenberg Wittmer married two firms already in sync when it came to thinking about international arbitration.

In Geneva, Laurent Lévy and Gabrielle Kaufmann-Kohler built a team with sufficient horsepower to compete for non-Swiss work. Meanwhile, in Zurich, Georg von Segesser and colleagues thought that diversity and more international work was the way to go.

While those partners have since left for their own boutiques (Levy and Kaufmann-Kohler in 2007, and von Segesser in 2017), they and their successors have built a team with unusual equipoise between Zurich and Geneva, a mixture of foreign-trained and Swiss lawyers and an emphasis on oral advocacy.

Since 2015, the practice has been chaired by Geneva-based partner Elliott Geisinger, an honorary president of the Swiss Arbitration Association (ASA). The vice chairs of the practice are Philippe Bärtsch in Geneva, another active ASA member, and Christopher Boog, who is a vice president of the Swiss Chambers’ Arbitration Institution and divides his time between Zurich and Singapore. Both have been at the firm since 2003.

Another highly regarded name is Nathalie Voser in Zurich, who is much in demand as an arbitrator. She sits on the boards of ASA and the Vienna International Arbitration Centre, and is a vice president of the LCIA.

A new generation of partners was promoted in 2019, including Julie Raneda in Singapore, and Anya George and Anna Kozmenko in Zurich, who are all recognised as “future leaders” by Who’s Who Legal. The firm now has seven partners who practise international arbitration full-time, four of whom are female.

Schellenberg Wittmer reckons to be one of the few firms in Switzerland to field common law-trained advocates who do nothing but arbitration. In fact, the firm believes that among its competitors, only Lalive matches it in terms of size, diversity and expertise of the arbitration team.

The team has taken part in cases governed by English, Polish, Czech, UAE, Thai, Senegalese, Indonesian, Indian, Chinese, Philippine and Cameroonian law, none of which were heard in Switzerland.

The firm is one of the few Swiss arbitration practices held in equal regard in the French and German-speaking parts of the country, with offices in Zurich and Geneva. In 2014, it made its first expansion into Asia, opening an office in Singapore.

The firm also acts for states and state-owned entities including Hungary and Algeria’s national oil and gas company Sonatrach. Russia has used it for Swiss court challenges to treaty awards relating to Yukos and Crimea.

In 2016, the firm helped Hungarian oil and gas producer MOL to defeat a billion-dollar claim brought by Croatia. As part of a co-counsel team, it persuaded a tribunal to reject allegations that the client paid bribes to a former prime minister. The same team also defended the award in the Swiss courts.

Schellenberg Wittmer acted for a major pharmaceutical in a US$210 million ICC dispute over non-conforming drug products. The client won on the merits and was awarded a significant part of the damages claimed, plus costs. Another case for Watson Pharmaceuticals ended in 2009 with a US$100 million win.

The team has had a string of successes defending awards in set-aside proceedings before the Swiss Supreme Court. For example, it preserved a €220 million award in favour of Orange/France Télécom and an ICC award in favour of US company Hasbro.

Getting an award set aside by the Swiss courts is traditionally much harder than defending one – fewer than 7% of award challenges succeed. But the firm has achieved this also.

The firm emphasises that a significant number of its cases end in settlement before arbitration or early in the proceedings – but “if there is a fight, the gloves come off”. One such settlement was in 2013 for Merck in a US$2 billion dispute with a major US drug-maker. Another was for Técnicas Reunidas in a US$100 million ICC case over energy projects in the Middle East.

Some of the firm’s most eye-catching work has come in sports disputes, particularly for a group of Russian athletes challenging their lifetime bans from Olympic competition for alleged participation in state-sponsored doping ahead of the Winter Olympics in Pyeongchang. A team led by Boog and Bärtsch convinced a panel at the Court of Arbitration for Sport (CAS) to overturn the bans for 28 athletes on the basis of insufficient evidence, while reducing bans for 11 more.

The firm is again representing Russia in a high-profile CAS case relating to a four-year ban from major sporting events imposed by the World Anti-Doping Agency for alleged manipulation of laboratory data.

Russia has also retained the firm for four investor-state arbitrations together worth billions of dollars, which have been brought by Ukrainian investors who lost assets in Crimea following Russia’s 2014 annexation of the territory. The firm has also acted in Swiss set-aside proceedings relating to awards in such cases.

Libya used the firm to successfully defend an ICC award in the Swiss courts against a challenge by a Turkish construction consortium. The award had declined jurisdiction over claims against the state as it was not a signatory to the claimant’s contract with a state-owned entity.

Schellenberg Wittmer reports securing a favourable settlement for a US pharmaceutical company in an ICC arbitration relating to the development of a drug.

Geisinger is co-counsel for a construction consortium in several ICC cases relating to the enlargement of the Panama Canal. Other work includes representing a German client in a US$575 million ICC construction dispute with a Kazakh counterparty.

An Asian company used the firm in a multiparty dispute relating to the defence industry.

Sebastiano Nessi, who is part of the team representing Russia in several Crimea-related cases, was promoted to counsel in Geneva.

The legal director of one client that Schellenberg Wittmer helped enforce a Netherlands Arbitration Institute award before the Swiss Supreme Court praises the firm’s ability to provide “brief, accurate, targeted explanations”. He says that the ratio of results to fees is the best his company has found in Switzerland and singles out Nathalie Voser, Anya George and counsel Benno Strub for praise.

Michael Barry of IMAR Trading & Contracting in Qatar used the firm for a multimillion-dollar arbitration over a large construction project in Abu Dhabi. He praises Philippe Bärtsch for providing “great leadership”, and Anne-Carole Cremades for ensuring the accuracy and relevancy of the final arguments. 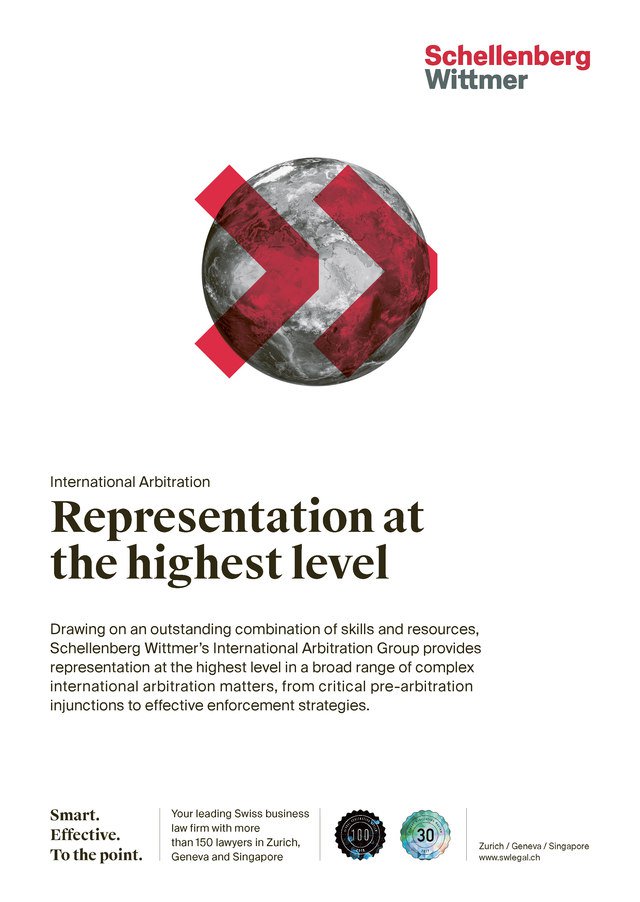