Not long after, the firm – one of Ecuador’s oldest – began to attract many foreign oil and gas companies affected by regulatory changes introduced by Ecuador’s former president Rafael Correa. It often pairs up with firms such as Freshfields Bruckhaus Deringer, King & Spalding, and White & Case on investment cases.

Rodrigo Jijón, a founder and former president of the Ecuadorean Arbitration Institute, leads the international arbitration practice and is also well known for his energy law expertise. Alongside partner Juan Manuel Marchán, who is increasingly active on investment treaty matters, Jijón is active in the ICC’s Ecuadorian chapter and was a member of the commission in charge of drafting a reform to Ecuador’s Arbitration and Mediation Law.

Another name to know is senior associate Alegría Jijón. Aside from acting on various investment and commercial arbitrations, she has been deeply involved in movements promoting diversity in arbitration. She is the secretary of the Ecuadorian chapter of the Spanish Arbitration Club (CEA), and chair of both CEA’s Arbitral Women in Ecuador and of the Latin America chapter of Woman Way in Arbitration. She was previously with GAR 100 firm Uría Menéndez,

Energy clients feature prominently on the list. Perenco, ConocoPhillips, Murphy Oil, Noble Energy and Japan’s Teikoku Oil have all turned to the firm for investment claims against Ecuador, as has Brazilian state oil and gas company Petrobras.

Chevron has also reportedly used the firm for local law advice in connection with its long-running dispute over environmental pollution in the Amazon rainforest – including in a denial of justice claim against Ecuador playing out before an arbitral tribunal in The Hague.

It has defended Occidental Petroleum and BP in local environmental litigation (the BP case was linked to the Deepwater Horizon spill).

The firm partnered with Freshfields in UNCITRAL proceedings on behalf of Petrobras and its consortium partners in a claim against Ecuador concerning the nationalisation of two oil projects. The tribunal awarded the claimants US$515 million in early 2018.

In 2017, the firm served as co-counsel with Haynes and Boone in ICDR proceedings on behalf of Global Franchising Group against a local franchisee in Ecuador, clinching a US$2 million award for its client.

The firm has been hired in several commercial arbitrations ranging from disputes over gas production plans to providing electromechanics for power plants in Ecuador – each of them several millions.

It is also acting in investment treaty cases under the China-Ecuador BIT and the Netherlands-Ecuador BIT.

Donoso Echanique Andres Francisco of Telefónica says the firm is “very professional”, and says its approach and strategy for handling arbitrations is “clear, efficient and always adjusted to the forecast”.

What distinguishes the firm is its “ethical proposals” and knowledge of business, the client adds.

Consultant Federico Chiriboga is praised for his advice and support.

PBP is the largest firm in Ecuador, considered a leader in the legal market and a trusted advisor for national and international clients. It has offices in Quito and Guayaquil and outreach throughout Ecuador.

Specialization is one of the main values of PBP. The firm has an extensive group of specialists across 17 practice areas. Each practice works in coordination with other areas to provide high qual­ity, comprehensive and effective legal advice.

PBP combines experience with dynamism. The team is comprised of several of the most reputa­ble and experienced lawyers in Ecuador who work together with talented younger members who excel in their practice areas.

The team has both local and international experience. Many professionals at PBP have attended renowned local and international universities and have worked at first-rate law firms around the world and some of its attorneys have been admitted to practice in the state of New York, District of Columbia, Spain, Chile, Colombia and other jurisdictions.

International arbitrationis one of PBP main practice areas, including ICSID and ICC cases ranging from investment arbitration to commercial disputes. PBP is listed by GAR 100 as a leading firm in this field.

The firm has been very active in the arbitration arena. It has recently represented MAESSA and SEMI (Consorcio GLP’s foreign investors) in an international investment-treaty arbitration brought under the Ecuador-Spain BIT, related to the unlawful termination of a construction contract; Teikoku Oil Ecuador and Cayman Exploration in an international arbitration under UNCITRAL Rules for the breach of the Oil Services Agreement executed with Ecuador (Petroecuador); Mexico’s largest soda bottling company in an ICC arbitration resulting from a Sales Purchase Agreement; subsidiaries of Hong Kong conglomerate CK Hutchison Holdings, knocking out the bulk of a US$200 million claim brought by an Ecuadorean port authority over their early termination of a port upgrade project (a split tribunal awarded just US$35 million in damages); Tuscany International Drilling in an arbitration against Consorcio CYA under the rules of the Quito Chamber of Commerce; Nestle Ecuador in an arbitration proceeding against Etinar S.A. brought under the rules and administration of the Quito Chamber of Commerce. 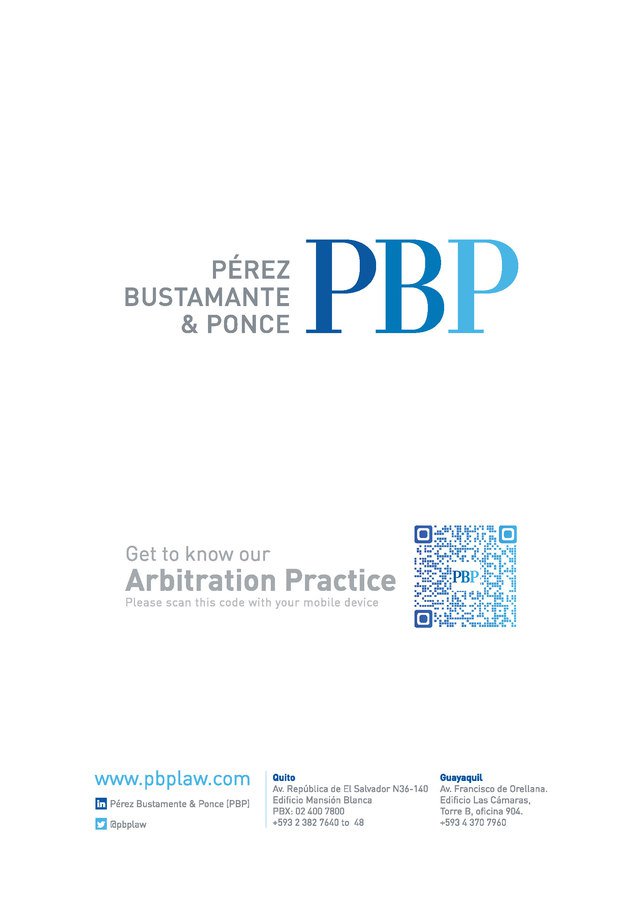