Japan’s biggest law firm, Nishimura & Asahi is also the only Japanese firm in the GAR 100. It was established in 1966 and has been involved in a number of arbitrations over the years, spanning M&A, joint ventures and construction. With Japan only recently beginning to make progress as an arbitral seat, the firm’s activities in this field haven’t been as visible as those of its counterparts in, for example, South Korea.

In 2010, it caught a lot of notice for winning a pro-New York Convention ruling in the Tokyo courts for insurance company AIU during set-aside proceedings; the case was shortlisted for a GAR award.

The team also includes partner Chie Nakahara; English-qualified foreign attorney Natalie Yap, who joined from Watson Farley & Williams in Singapore; and partner Lars Markert, a recent arrival from Gleiss Lutz in Stuttgart who had previously spent two years on secondment at Nishimura. He has experience in commercial and investment-treaty arbitration and also sits as arbitrator.

Another name to know is Singapore partner Shintaro Uno who has been helping the firm branch out into Singaporean and Indonesian arbitrations, particularly construction-related cases. Uno also sits as arbitrator.

In New York, there is counsel Azusa Saito who relocated there from Tokyo.

A Japanese automotive company used the firm to good effect in a US$300 million dispute with a former Asian distributor. The firm obtained an anti-suit injunction in 2017 from a JCAA tribunal made up of three well-known arbitrators, then went on to prevail in the arbitration in the following year. The client was granted the declaratory relief it asked for along with over US$3 million in costs.

In 2018, the firm successfully defended a Japanese automotive client in a US$70 million JCAA case brought by a former distributor in the Middle East. Herbert Smith Freehills in Tokyo was on the other side.

Together with a UK firm, Nishimura & Asahi helped a large Japanese corporation secure the dismissal of a US$175 million claim relating to the termination of a distribution agreement.

A team led by Uno secured a win for a Japanese client in a BANI arbitration, following which the respondent, a local developer, filed set-aside proceedings in an Indonesian court. The firm says it is handling several parallel court proceedings arising from Indonesian-seated arbitrations.

The firm has raised its international profile further by hiring two new foreign attorneys, including Anne-Marie Doernenburg – a German national who previously practised at the London, Paris and Washington, DC offices of Freshfields Bruckhaus Deringer.

Doernenburg will support Markert in his efforts to secure more investment arbitration work for the firm. Markert recently obtained an instruction from a Japanese ministry to compile information on the 50 leading investment treaty arbitrators – a contract for which the firm beat several specialised international law firms.

A Japanese client who worked with Nishimura on an M&A-related international arbitration in Singapore says the firm “tirelessly dedicated themselves in preparation for the evidentiary hearing”. The client singled out Markert’s ability to “always respond to any difficult question promptly and deal with any emergency” and his capacity to come up with “creative tactics”. Akihiro Hironaka also impressed with his calm and his tolerance for clients’ queries, as well as his “deep understanding of the peculiarities of Japanese companies” and his “flexible mind”.

Nishimura & Asahi is a leading Japanese law firm, covering all aspects of domestic and international business and corporate activity. We pride ourselves on being a pioneer at the forefront of creating innovative solutions for resolving disputes in Japan and elsewhere. Our achievements in large and complex disputes in respect of a wide variety of industries and practice areas is unrivaled. This has been made possible by the advantages arising from our scale, as the largest international law firm headquartered in Japan, and the comprehensive range of services we are able to offer.

With more than 30 years’ experience in the field, our international arbitration practice group, headed by Hiroyuki Tezuka, is dedicated to providing our clients with the highest quality services for dispute resolution. We have been involved in high-profile and large-scale arbitrations under various institutional rules, such as those of the ICC, SIAC, JCAA, AAA-ICDR, KCAB and VIAC, and are also experienced in ad hoc arbitrations. Our arbitration practice group has experience handling arbitrations relating to post M&A disputes, joint ventures, licenses, distributorships, franchises, construction and infrastructure projects, foreign investments and investor-state disputes, and intellectual property. We are Japan’s first and only law firm to be listed in the “GAR 100”.

With the continued expansion of our international presence and clientele, we have overseas offices in Bangkok, Beijing, Shanghai, Dubai, Hanoi, Ho Chi Minh City, Jakarta*1, New York, Singapore, Yangon and Hong Kong*2, and domestic offices in Tokyo, Nagoya, Osaka, and Fukuoka. Through our domestic and global network, we are ideally placed to provide our clients with a borderless one-stop service, from Japan to the world. 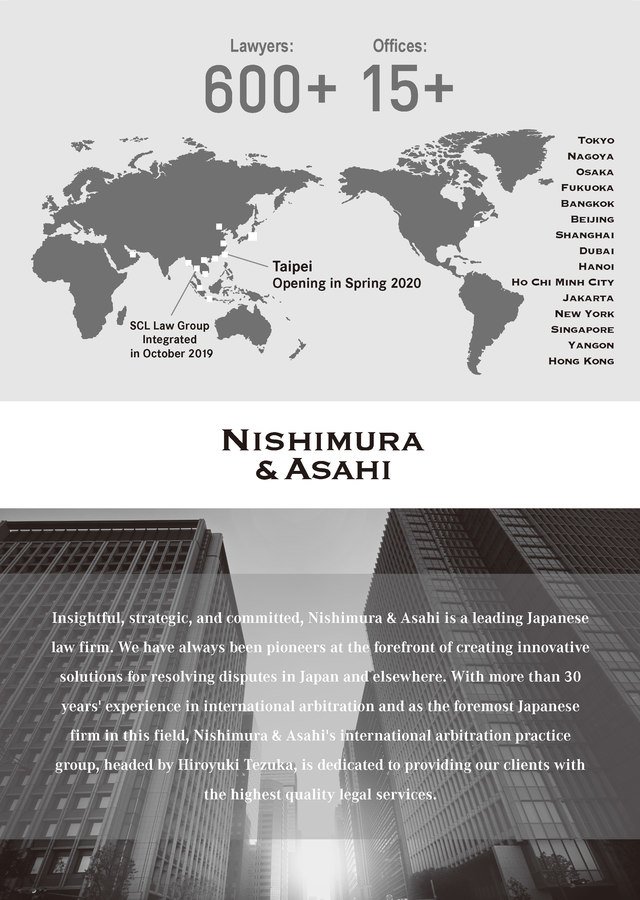