A prominent hire in Frankfurt has revitalised the investor-state practice

Headquartered in Philadelphia, Morgan Lewis & Bockius featured in some of the early editions of the GAR 100, thanks to the work of former partner Mark Bravin for sovereign states on several high-profile investment disputes. The practice was also supported by Don Wallace Jr, a former White House counsel from the George W Bush administration.

However, the firm dropped out of the 100 in 2011 as that team moved to Winston & Strawn. It makes a re-entry this time around thanks to the arrival of partner Sabine Konrad in Frankfurt.

Konrad, who joined in 2019 from McDermott Will & Emery with a team of two associates, is an investment arbitration specialist best known for defending Germany in a €4.7 billion Energy Charter Treaty claim brought by Sweden’s Vattenfall concerning the phase-out of nuclear energy. She’s also one of Germany’s designees to the ICSID panel of arbitrators and the founder of the Frankfurt Investment Arbitration Moot.

Other names to know include partners Peter Sharp and David Waldron (who formerly worked with Konrad at Dewey & LeBoeuf). Dmitry Ivanov in Moscow and Wendy Tan in Singapore also practise commercial arbitration.

The core arbitration team is in Frankfurt, London, Moscow and Singapore. The firm has 31 offices globally, 17 of which are home to its arbitration practice, including in China, Japan and Kazakhstan.

Besides defending Germany at ICSID, Konrad is advising a number of German financial institutions in claims against Spain and Italy relating to renewable energy investments. The Paris office has acted for Toys “R” Us.

Konrad’s track record at her previous firms includes representing German airport operator Fraport in a long-running ICSID dispute with the Philippines. She has also obtained a US$4 million BIT award against Costa Rica on behalf of German investors in an eco-tourism resort; and helped Poland to defeat a US$35 million claim brought by US investors in a blood plasma laboratory.

Konrad is representing Landesbank Baden-Württemberg (LBBW) and three other banks in an ICSID claim against Spain over reforms to its renewable energy sector. The banks say they financed 78 renewable energy plants in the country with loans worth a combined €1.76 billion. The tribunal has already dismissed Spain’s jurisdictional objections based on the alleged incompatibility of the Energy Charter Treaty with EU law.

In October 2019, Konrad was instructed by another group of German solar investors led by VM Solar Jerez for an ICSID claim against Spain over the same reforms.

Meanwhile Hamburg Commercial Bank has retained her for an ICSID claim against Italy over the seizure of a wind farm amid allegations that a shareholder in the project is linked to a local Mafia group.

She is also leading a team acting for an Estonian fintech company in an ICC claim against Kosovo, filed after the state’s central bank revoked the business licence of its subsidiary over the interest rates charged on its loans.

A team in the US is representing a subsidiary of US bottlemaker Owens-Illinois in a bid to enforce a US$400 million award against Venezuela in the DC courts. The firm defeated an attempt by Venezuela’s purported government-in-exile, led by Juan Guaidó, to obtain a stay of enforcement.

Mathias Wolkewitz, general counsel at German crude oil and natural gas producer Wintershall, says that Konrad is “the most outstanding person in international arbitration,” particularly in investor-state matters. “Her knowledge, strength on the facts and in advocacy as well as her dedication are without comparison.” 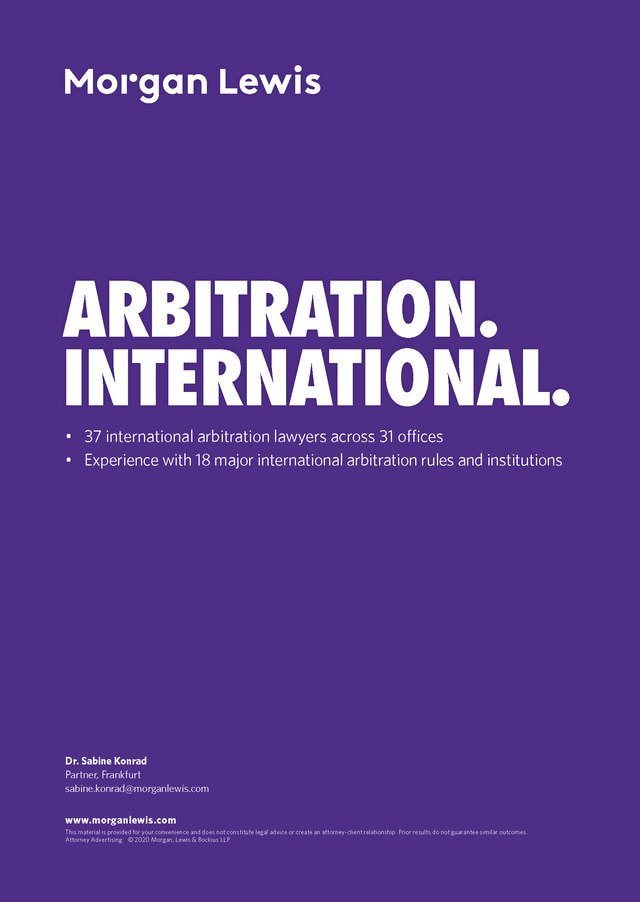