Eric Teynier and Pierre Pic founded this disputes boutique in 2004 after working for many years at Shearman & Sterling in Paris alongside Emmanuel Gaillard. (They went independent after a short stint at the legal arm of professional services firm EY.)

In 2007, they recruited Laurence Kiffer from Derains & Associés - a member of the Paris Bar Council – plus various younger lawyers from well-regarded arbitration shops such as Jeantet Associés.

A decade later, they added a fourth partner, Raphael Kaminsky. Well known in his own right, he had previously worked at Latham & Watkins and Lazareff Le Bars, and on a solo basis.

While Kiffer left the firm in 2019, the firm boosted its ranks with two new counsel: Canadian practitioner Sara Nadeau-Séguin, who helped defend Russia in the Yukos arbitrations, was hired from Montreal boutique Woods; and Anne-Sophie Tonin was promoted from within. The team also includes nine associates fluent in French, English, Spanish, Italian, German, Polish, Marathi, Persian, Tamil and Hindi.

Teynier Pic has represented clients from industries as diverse as aerospace and defence, telecoms and fashion, on mainly ICC matters. It also handles investment treaty matters, for both investors and states. It has a particular niche for disputes from Francophone Africa.

In 2016, it entered an alliance with Griffin Litigation, a London and New York-based boutique set up by Peter Griffin, once a rising star at Baker Botts and now principal at Slaney Advisors. Griffin Litigation specialises in enforcement, particularly against sovereign states.

Teynier, Pic and Kaminsky regularly sit as arbitrators. Teynier was on the tribunal in the famous Getma v Guinea case, which saw a clash with the OHADA Common Court of Justice and Arbitration over the arbitrators’ remuneration.

In investment treaty cases, it has defended the Czech Republic and acted for French clients in claims against Vietnam.

Acting for the Czech Republic, Teynier Pic defeated a €80 million claim by German investor Rupert Binder in 2011, breaking a losing streak for the state in bilateral investment treaty cases.

It also helped a French client defeat a €325 million claim by an Alstom subsidiary over an LNG containment system in a London-seated ICC arbitration, later winning a number of related actions in the English and French courts.

One of Teynier Pic’s first collaborations with Griffin was in 2016 when together they seized Equatorial Guinea’s presidential jet, a Boeing 777, reserved for president Teodoro Obiang Nguema, at Lyon airport as part of efforts to enforce a €135 million ICC award owed to Orange.

Also in 2016, the team helped a Franco-Algerian joint venture win a €110 million arbitration against an Algerian state-owned oil company, over a contract to provide security for oil and gas pipelines. Their client succeeded on its claims and won enforcement of the award. Quinn Emanuel represented the other side.

The team also enjoyed success for a US military contractor in a €70 million ICC case against a Middle Eastern state, over the state’s failure to pay for work done upgrading the engines of its air force. The arbitration took place in Geneva and was settled, with the state agreeing to pay all Teynier Pic’s client’s outstanding debt.

It emerged in 2020 that, two years previously, Teynier Pic and Slaney Advisors helped Turkish construction company Cengiz to win a US$125 million BIT award against Libya – the first time the state had been held accountable for the Arab Spring uprising for the first time.

Libya has applied to the Paris Court of Appeal to have the award set aside. In those proceedings, Cengiz continues to use Teynier Pic.

In 2019, partner Shaparak Saleh acted for two investors in French court proceedings to overturn an earlier court decision that partially annulled an investment treaty award issued in their favour against Venezuela. The award was reinstated and Venezuela’s set-aside application was submitted to the French Court of Appeal.

With co-counsel Fietta, Teynier Pic also acted for US investors in a bid to set aside an award that rejected theirUS$125 million ICSID claim against Poland. over a dispute arising over the bankruptcy of a vegetable oil business. The Paris Court of Appeal rejected the investor’s attempt to set that award aside and ordered the investors to pay €200,000 towards the state’s legal costs.

The firm continues to act for Cameroon in a long-running ICC arbitration brought by a Belgian company under a farm lease contract. In 2019, the ICC dismissed the state’s challenge to Argentine arbitrator Horacio Grigera Naón.

It is also acting for Lebanese engineering company Zakhem in set-aside proceedings before the French courts against Algeria’s Sonatrach.  The case relates to a €50 million ICC award issued in 2018.

One client who is using Shaparak Saleh to set aside an ICC award before the Paris Court of Appeal says she has been “greatly impressed” by her intelligence and determination.

ICC rejects challenge based on repeat appointments by investors

Cameroon has failed in a bid to dislodge Argentine arbitrator Horacio Grigera Naón as tribunal chair in a long-running ICC arbitration on the grounds of his failure to disclose repeated appointments by private parties in disputes involving states or state entities.

The ICC dismissed the challenge against tribunal chair Grigera Naón and his Burkinese co-arbitrator Filiga Michel Sawadogo in a letter on 25 April.

The challenge arose in a Paris-seated ICC arbitration brought by Belgian company SPRL Project Pilote Garoubé against Cameroon in 2007 under a farm lease contract.

The dispute is already well known to French arbitration practitioners because of a 2012 decision by the Paris Court of Appeal, which annulled a partial award in the case on the basis that Garoubé had sought to further the financial interests of one of the original arbitrators, Pierre Estoup.

Cameroon wrote to the arbitrators in February to ask them to specify the number of times each of them had been appointed – in arbitrations between a private party and a state – either by the private party, by the state or as chair of the tribunal. It also asked them how many times they had issued a dissenting opinion when the party that had appointed them was not partially or wholly successful.

In their replies, the three arbitrators declined to provide the information on the grounds that, in the absence of new circumstances calling into question their independence or impartiality, there was no reason to add to the declarations they had given at the time of their nomination.

Cameroon applied to the ICC on 28 March to disqualify all three arbitrators, though it later withdrew the challenge against Favre-Bulle.

Founded in 2004 by two former Shearman & Sterling and EY lawyers who had worked together for more than a decade, Teynier Pic is an international "boutique" firm dedicated to dispute resolution.

Being an independent law firm allows Teynier Pic to devise tailor-made solutions for its clients in each and every situation, whilst avoiding conflict of interests

Teynier Pic is an international law firm as reflected in the diversity of qualifications, experiences, personal and professional background of its lawyers. Their working languages include French, English, Spanish, German, Italian, Persian, Hindi and Tamoul. The international field is their daily workplace.

Teynier Pic recently formed a strategic alliance with Griffin Litigation PLLC, an international arbitration and enforcement boutique, based in London and New York, and founded by Peter Griffin.

A Leading Firm with a Human Scale

Teynier Pic consists of five partners, one counsel, six associates, four interns, and an administrative team based in Paris. The size of the firm makes it nimble, highly responsive and flexible in catering to its clients’ needs. Team spirit and collegiality are its hallmark.

Teynier Pic is recognized as a leading international arbitration practice thanks to the wealth of experience and stellar reputation of its partners, built through a consistent track-record over the past 14 years.

To this day, its lawyers have acted as legal counsel or arbitrator in more than 300 cases, involving more than 50 countries.

What Do We Do?

Who Are Our Clients and What Do They Say About Us?

The firm represents both domestic and international clients, including corporates, states and investors.

The firm’s dispute resolution practice is transverse in nature. It has more than fourteen years of experience in the following sectors: Aviation and Aerospace, Chemical and Pharmaceutical, Construction, Corporate, Energy and Natural Resources, Investment, Banking, Insurance, Telecommunications and Defense.

"Teynier Pic’s ‘super responsive’ 11-lawyer team provides an ‘outstanding level of service’, is ‘business-oriented and very hard-working’ and represents leading French companies, such as Thales, Soufflet and Orange, and international groups in commercial and investment cases. It is handling several disputes involving Africa and the Middle Eastern regions pertaining to the defence, construction and pharmaceutical sectors, but also handles some exequatur cases."

To learn more about our Firm: http://bit.ly/TPPrezi 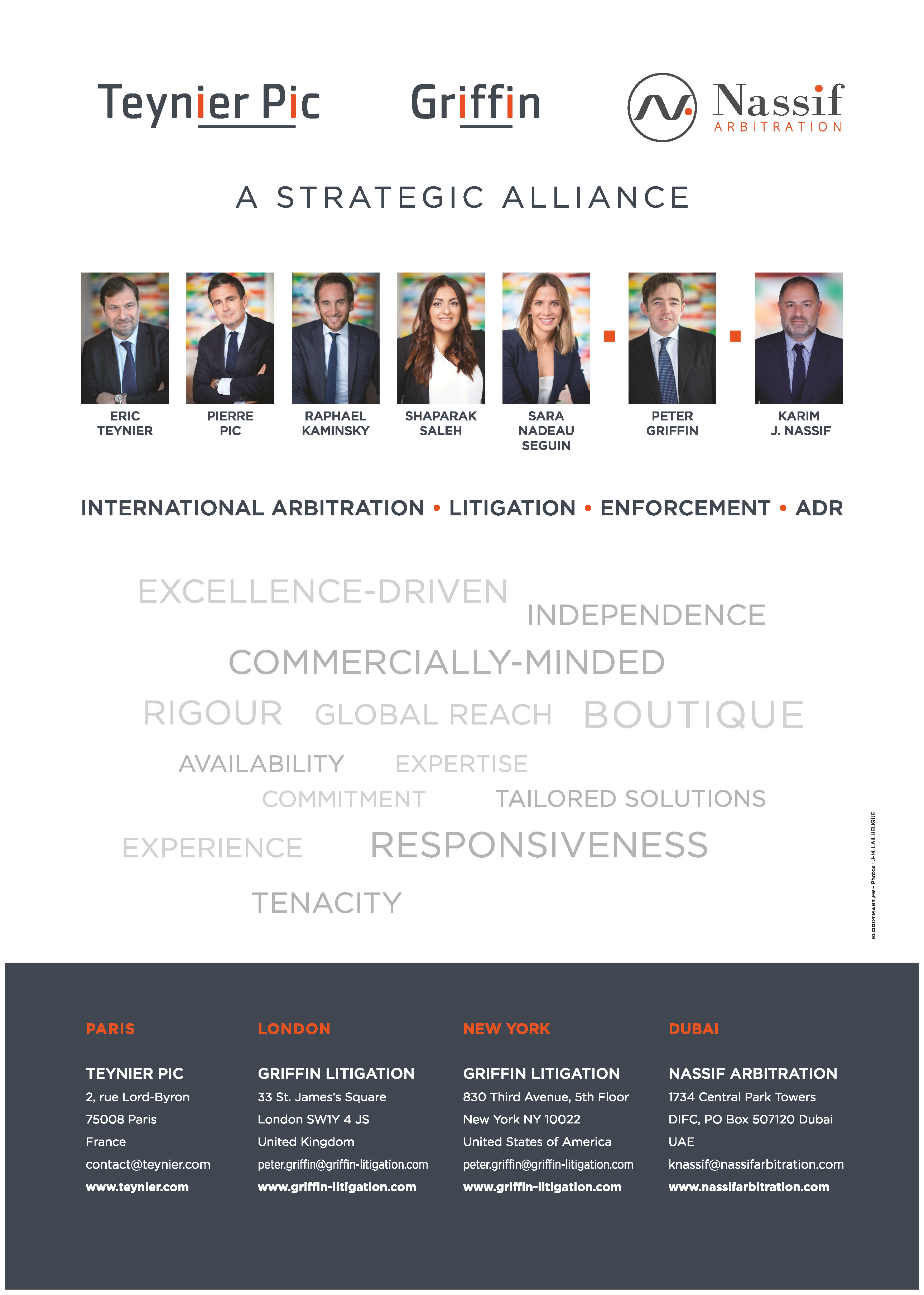