Secured wins for Estonia and a Dutch tech company

Squire Patton Boggs is the product of a 2014 merger between two US firms: Cleveland-based Squire Sanders and Patton Boggs in Washington, DC.

Partner George von Mehren, who divides his time between Cleveland and London, built the Squire Sanders arbitration team in the 2000s and has led the international dispute resolution practice for nearly two decades.

Two other figures have led much of the firm’s investment arbitration work. Stephen Anway, who is based in New York and Washington, DC, joined Squire Sanders in 2004 and was recently appointed to co-head the merged firm’s disputes practice alongside von Mehren. Rostislav Pekar in Prague began his career at Squire Sanders in 2001, working on the Saluka v Czech Republic case just after graduating from university.

While most of the merged firm’s arbitration capability came from the Squire Sanders side, Patton Boggs had been working in the Middle East for over 30 years, and developed a disputes practice led by Doha-based construction disputes specialist Tom Wilson and Dubai-based Alain Farhad (who joined from Freshfields).

The firm scored a coup in 2019 with the recruitment of a nine-strong team from Curtis Mallet-Prevost Colt & Mosle, including partner Miriam Harwood in New York, who now co-heads the investment arbitration practice alongside Pekar. The contingent from Curtis also included partner Ali Gursel and his entire team in Ashgabat.

Another name to know in New York is Luka Misetic, a US lawyer of Croatian origin who joined the merged firm in 2015 and has acted in cases before the International Criminal Tribunal for the former Yugoslavia.

The merged practice is best known for its work on behalf of states in investment disputes and buyers in gas price review arbitrations. It reckons to have concluded more than 40 gas pricing disputes in Europe or Asia with wins or settlements negotiated prior to the commencement of arbitration, for clients including Gas Natural and Edison.

The practice reckons it has more than 135 arbitration-literate practitioners in more than 24 offices. The key US and European offices are London, Paris, Frankfurt, Prague, New York and Washington, DC. Middle East work is handled from Dubai and Doha.

n 2020, the firm opened in Milan with the hire of another Curtis partner, Galileo Pozzoli, who had led his old firm’s office in the city for a decade. The recent arrivals from Curtis have given it a presence in Ashgabat for the first time.

There are also arbitration-literate lawyers found in Budapest, Moscow, Houston, Columbus, Miami and Santo Domingo in the Dominican Republic. The wider firm has 46 offices spanning 21 countries.

Recent state clients include Costa Rica, Croatia, Estonia, Ecuador, Gabon, Kosovo, Libya, Slovakia and Saudi Arabia. The arrival of the team from Curtis has brought a number of active cases for Turkmenistan.

It has also acted for New Doha International Airport and Hitachi.

The firm has done stellar work for Slovakia. In 2017, it helped the state to defeat a US$1.65 billion ICSID claim brought by investors in a talc mine.

There was a win in 2018 for Kosovo in its first-ever investment treaty case – a €380 million claim brought by German private equity group ACP Axos Capital over a thwarted telecoms privatisation deal. Kosovo defeated the claim and was awarded US$2 million in costs.

It also secured the dismissal of a treaty claim against Slovakia by Dutch insurer Achmea on jurisdictional grounds and an award of costs for the client. GAR recognised the victory as one of the most important decisions of 2014.

Together with Dechert, Squire Patton Boggs helped Ecuador convince an ICSID annulment committee to shave US$700 million off an award in favour of Occidental Petroleum in 2015. Ecuador paid US$980 million to satisfy the award in the following year.

The firm says its success in obtaining favourable awards has contributed to a series of high-value settlements in more recent price review cases.

A team led by Anway secured Dutch technology developer GeoSolutions a US$126 million Netherlands Arbitration Institute award against Beijing-based Sina Corporation, the company behind one of China’s largest social media websites. The dispute had concerned a breach of a licence agreement to use location-based service software.

Partner Raúl Mañón in Miami has been leading a team defending a PDVSA subsidiary in a trio of sensitive ICC cases, which concern allegations of corruptly procured contracts. A US$12 million award against the client was rendered in one arbitration in 2018 but was set aside in the following year by the Hague Court of Appeal, which found the arbitrators had applied too stringent a standard in dismissing the corruption allegations. Squire Patton Boggs assisted Dentons in the set-aside proceedings. At least one of the other arbitrations has been suspended following the announcement of US sanctions against PDVSA, while the parties seek authorisation from US authorities to continue with the case.

The firm also helped Turkmenistan secure a rare order for security for costs at ICSID, against the administrator of an insolvent German company bringing a third-party funded claim.

Costa Rica is using the firm to defend a US$100 million ICSID claim brought over measures that targeted a chicken meat-processing business on public health grounds.

Libya has been using the firm for four investment treaty cases being heard at the ICC. One of these, a €190 million claim brought by Turkish contractor Güriş, saw a partial award on jurisdiction and liability in February 2020 – with the investor only prevailing on part of its claim. A damages phase is pending.

Spain is using the firm to defend against enforcement proceedings brought by renewable energy investors 9REN in the US courts, and Eiser and Infrastructure Services Luxembourg in the Australian courts.

On the investor side, it’s representing Canadian nationals and their companies in an ICSID claim against Serbia over the alleged expropriation of a dairy farm.

Paul Myers, head of legal at Luxembourg fund Redline Capital Management, says he “cannot recommend the arbitration team highly enough” and will continue to use them for all future matters.

Another client describes the firm as reliable with highly qualified and dedicated practitioners. Raúl Mañón in the Miami office is praised for his expansive knowledge of international law.

Squire Patton Boggs is one of the world’s strongest integrated legal practices with more than 1,500 lawyers in 44 offices across 21 countries. For more information, visit www.squirepattonboggs.com 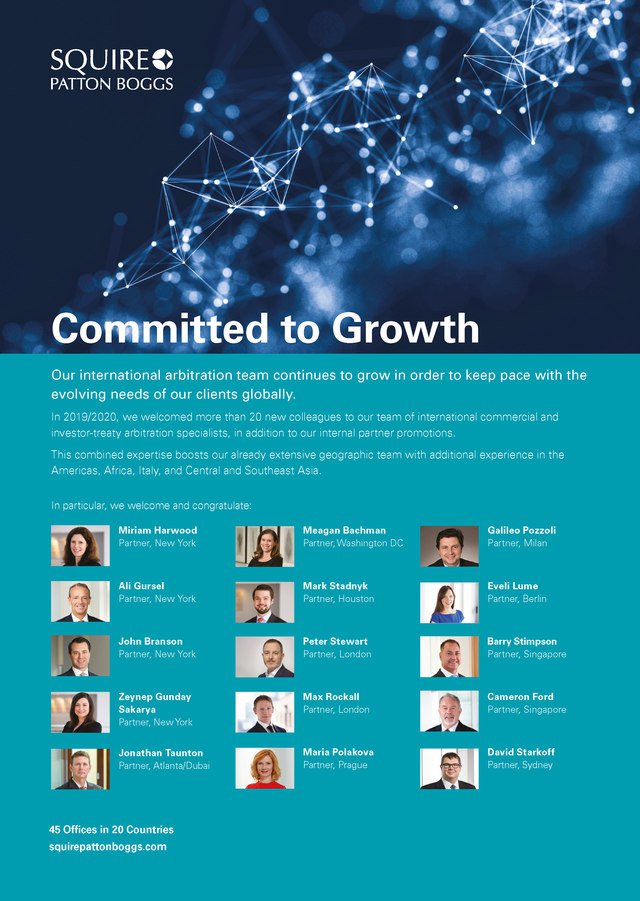