Though the firm dates back 100 years, Pestalozzi’s arbitration practice was established around 25 years ago, flourishing under the care of respected arbitrator Pierre Karrer.

He left the firm some years ago to establish his own boutique but the team has continued to boast one of the largest arbitration practices in Switzerland, with as many as 30 lawyers in the practice. It has offices in Zurich and Geneva.

It has also paired with White & Case to defend Thailand-based latex glove producer Siam Sempermed in a Swiss arbitration brought by one of its shareholders, Austria’s Semperit.

Another client is the Indian government.

The firm has acted for the claimant in one of the largest cases before the Swiss Chambers Arbitration Institute, worth more than US$1.5 billion. As part of that dispute, it won a rare set-aside decision from the Swiss Federal Supreme Court.

It has obtained annulments in another case, which marked the first time the Swiss court has set aside two awards in the same dispute. One award was annulled in 2014 and the other in 2016, after the court found the arbitrators had ignored its guidance and merely affirmed their earlier findings.

In another Swiss court action, it helped a unit of Bosch successfully defend an ICC award in a dispute with Italian engineering firm Piacentini over liability for a ship-lift accident at the port of Livorno.

Pestalozzi represented the Indian government in a challenge before the Swiss Federal Tribunal to an investment treaty award in favour of Deutsche Telekom. The high-profile case saw the court conduct a rare public deliberation before upholding the award by a three-to-two majority in 2018.

The firm is co-counselling with Curtis Mallet-Prevost Colt & Mosle to represent Turkmenistan’s national gas company Türkmengaz in a multibillion-dollar ICC arbitration with the National Iranian Gas Company over an alleged debt for gas deliveries.

It continues to team up with Clifford Chance to represent Bouygues in a dispute worth more than 200 million Swiss francs with Swiss energy company Alpiq before the Swiss Chambers. The client seeks a purchase price adjustment following its €750 million acquisition of Alpiq’s engineering services business in 2018.

Gerrit Dekker of Aspetix Health Services in Netherlands says he has had one of the best experiences with legal advice in litigation with Pestalozzi. Thomas Legler is commended for being hands-on, practical and efficient.

Having retained the firm in a breach of contract dispute against a Swiss corporation, the client says Legler provided “clear” and “well-motivated” advice on litigation strategy.

Pestalozzi supports its international and domestic clients from its offices in Zurich and Geneva regarding all aspects of Swiss law. With the extensive experience and the strong commitment of its staff, the firm helps its clients achieve their goals quickly and efficiently. Pestalozzi’s roots go back to 1911; of the major Swiss law firms, Pestalozzi has the longest tradition.

Pestalozzi's Litigation & Arbitration practice group offers a full range of dispute resolution services for all businesses and industries and covers all aspects of litigation, arbitration, and mediation.

Members of the group also frequently serve as arbitrators and mediators in ad hoc and institutional arbitrations. Further, they regularly lecture on dispute resolution issues before practitioners and academics and publish in their areas of expertise. 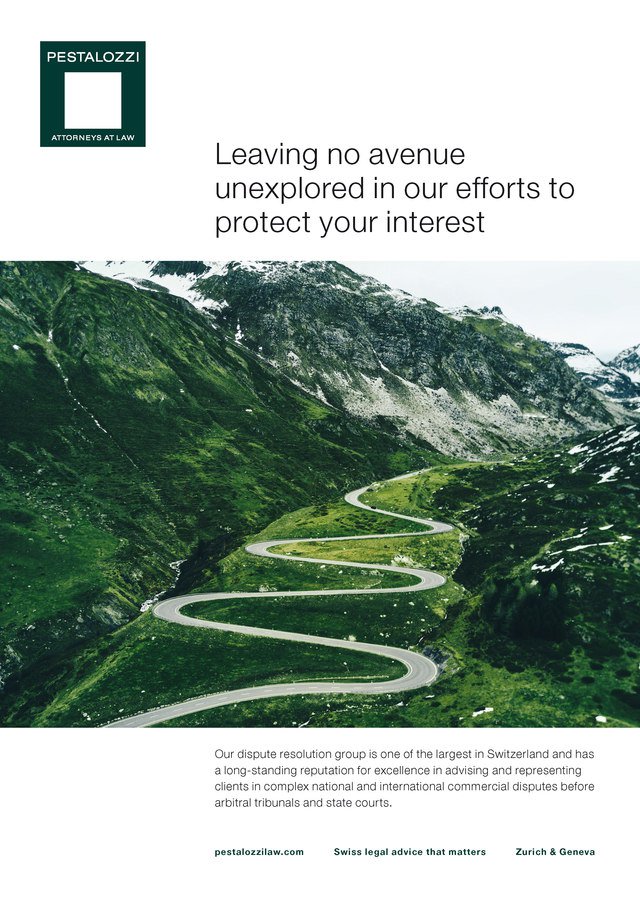