Nayla Comair-Obeid founded the firm in Beirut in 1987. Both firm and founder have since played a significant role in the development of arbitration in Lebanon and the Middle East – preparing the first draft of the current Lebanese arbitration law and the Arabic versions of the IBA guidelines and ICC rules, for example.

A professor at the Lebanese Judicial Institute and Lebanese University and visiting professor at the University of Paris (Panthéon-Assas), Comair-Obeid has trained lawyers and judges across the Middle East about arbitration. Indeed, she claims responsibility for “an arbitration awareness campaign” across the country and the rise in undergraduate conferences devoted to the field.

She has also played an active role in the international arbitration community, serving on the board of Cairo’s arbitration centre and as vice chair of the IBA arbitration committee, and becoming president of the Chartered Institute of Arbitrators in 2017 – the first woman from the Middle East to take on the role.

Nowadays, Nayla is not the only Obeid on the scene. Her son Ziad joined the firm in 2011 after training as a civil engineer and practising at Freshfields Bruckhaus Deringer in Paris and Dubai. He specialises in construction disputes and sits as an arbitrator and on the steering committee of the IBA arbitration committee’s under-40 group.

Daughter Zeina Obeid is also now an associate at the firm, having completed her PhD at University Paris II Panthéon-Assas on the set aside of awards in Arab countries.

In addition to being very active in the MENA region, the firm’s mandates extend to West Africa, Europe, the Caribbean and North America.

The firm doesn’t like to name clients but the list is thought to include a number of states and government entities as well as large companies from the region, in addition to some well-known international companies, particularly in the oil industry.

In recent times, it’s represented a Qatari-Saudi engineering contractor in a U$53 million dispute with a German multinational over a power utility, which was heard under ICC rules in Geneva, and handled an ICC case against a German-Italian conglomerate over a steel bar mill in Qatar.

It’s also acted for a multinational on a dispute over a plant in Syria and advised on worldwide injunctions in support of a multibillion-dollar LCIA case.

In the courts, it’s acted for Kuwaiti Airlines in annulment proceedings.

The firm has a track record of co-counselling with international firms and acting in Lebanese court proceedings relating to international arbitration. For example, it acted for Turkey in an action relating to the US$10 billion Libananco case at ICSID (in which Freshfields was counsel for the state).

The firm has been involved in a number of oil and gas disputes in the MENA region, including acting as legal expert in a case between a consortium of oil and gas companies and a government entity where the amount in dispute exceeded US$820 million. Freshfields and Three Crowns were acting as lead counsel.

The firm successfully represented a regional EPC contractor in a complex ICC arbitration involving a major infrastructure project in the region, obtaining a significant win for their client.

The firm also acted for a Saudi investor against one of the largest Saudi construction companies in a complex high-value construction dispute involving a series of landmark projects in Lebanon.

Comair-Obeid is also well known for her arbitrator work. She issued a US$23 million award in a construction dispute between a Bahraini contractor and a UAE family that was enforced in London in 2012. She chaired a panel that heard a treaty claim brought by Cypriot company Olin Holdings against Libya. The panel ordered Libya to pay around one sixth of the €105 million claim.

The firm is representing an Australian contractor in three international arbitrations in the UAE (under both the DIFC-LCIA and the LCIA Rules). The disputes relate to the construction and expansion of the largest malls in the Middle East, as well as major hotels and resorts in the UAE. The amounts in dispute exceed US$300 million.

It is also acting as lead counsel for a major regional EPC contractor in an ICC arbitration seated in Doha with a multibillion-dollar conglomerate – where the amount in dispute totals over US$160 million.

In 2019, Comair-Obeid was appointed to the ICC executive board for a three-year.

The firm has also been mandated to rethink Lebanon’s arbitration framework with a view to proposing a revised arbitration law in 2020.

Louis-Philippe Lapicerella, a Canadian-qualified senior arbitration lawyer with prior experience at Pinsent Masons in Paris and Clyde & Co in Montreal, has joined the firm as counsel; and Megan Thompson, an Australian-qualified dispute resolution lawyer, has joined as an associate.

Established in 1987, Obeid Law Firm is a full-service law firm operating in the Middle East and North Africa region from its headquarters in Beirut, Lebanon. The firm is widely recognised as one of the leading law firms in Lebanon and the Middle East, and holds widespread recognition among local and international legal practitioners.

Known for its commitment to excellence and its expertise in Middle Eastern legislations, the firm has established a first-class international arbitration practice acting as parties’ counsel, arbitrator, or expert. Obeid Law Firm has been involved in some of the largest arbitration cases in the Middle East, and has actively participated in various legal reforms in Lebanon and the Gulf region. The firm also advises clients at the pre- and post-arbitration stages, and has drafted arbitration agreements and enforced arbitral awards, foreign courts decisions, and asset preservation orders.

Known for its diverse arbitration portfolio, the firm has been engaged in matters conducted under various arbitration rules and subject to a wide range of applicable laws, including: Syrian, UAE, Egyptian, Qatari, Jordanian, Kuwaiti, Lebanese, Tunisian, Libyan, Yemeni, Omani, French, Swiss, Italian, English and US Law.

Members of the firm have also been called to give expert evidence on aspects of Middle Eastern legislations before arbitral tribunals and foreign courts, including the Grand Courts of the Cayman Islands and the English High Court. Numerous books and publications on international contracts and international arbitration have been authored by the firm members in Arabic, French, and English, including the reference book “The Law of Business contracts in the Arab Middle East” and the recent treatise “Action for Annulment of Arbitral Awards in the Arab Countries” (Le recours en annulation des sentences arbitrales dans les pays arabes).

Obeid Law Firm is a drafting contributor to the “GAR Know How” publication and the “Guide to National Rules of Procedures for Recognition and Enforcement of New York Convention Awards” published by the International Chamber of Commerce (ICC) in Paris. The firm is also the author of the “IBA Arbitration Guide” for Lebanon and has participated in the review and translation of the Arabic versions of the KCAB rules, the IBA Guidelines for Drafting International Arbitration Clauses and the revised 2012 ICC Rules.

The firm is also home to the past President of the CIArb and the current Chairman of the Lebanon Branch of the CIArb, both of whom are partners. 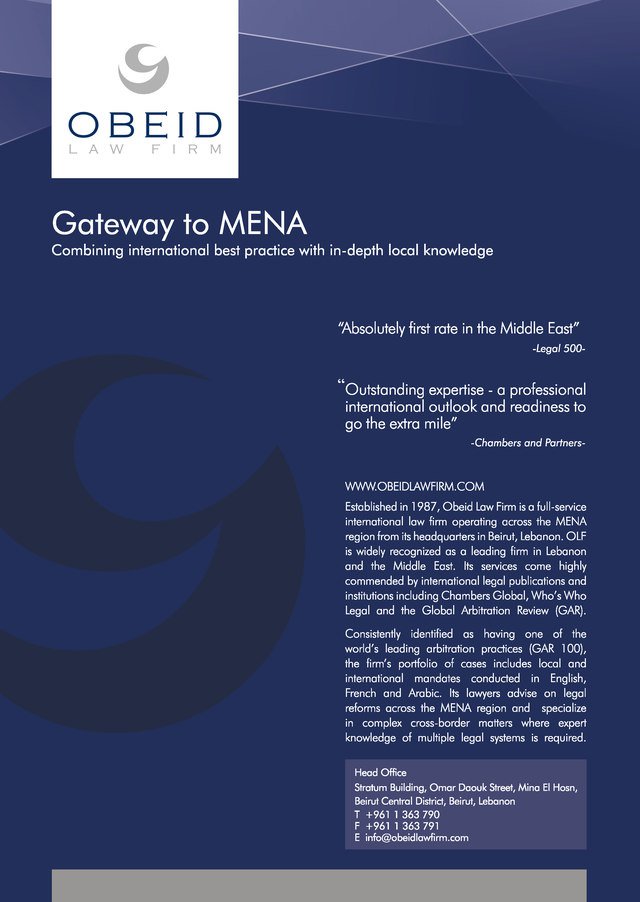