One of the founding fathers of the German Institution of Arbitration, Martin Luther, established this firm in Hamburg in 1950. Originally a boutique corporate firm, it began to receive international arbitration work after a merger with Arthur Andersen’s local legal division.

After the implosion of Arthur Andersen, Luther formed an association with Ernst & Young. The firm ended that relationship in 2006 but retained an international focus. Its reputation developed in investment arbitration after it became one of the first firms in the country to be instructed on a treaty claim (Inmaris v Ukraine).

Luther’s arbitration practice has a heavy focus on energy disputes and the firm represented Swedish state-owned energy company Vattenfall in the first-ever ICSID case against Germany – a €1.6 billion claim under the Energy Charter Treaty that eventually settled. The same client instructed it for a second ICSID claim worth €4.7 billion over Germany’s decision to phase out nuclear power in the wake of Japan’s Fukushima crisis. An award in the second case is pending.

Hamburg-based Ulrich Theune established the arbitration practice but retired as a partner in 2012 to focus on arbitrator work, though he continues to support the firm on select cases. The practice is now chaired by Richard Happ in Hamburg, who has been at the forefront of much of the investment treaty work, including acting as lead counsel in Vattenfall.

Jutta Wittler in Cologne specialises in construction, while Borbála Dux –previously with Freshfields – joined in 2018 as a partner in Cologne where she acts in international commercial arbitrations, mass claims, and post-M&A disputes. Christoph von Burgsdorff in Hamburg, who became a partner in 2012, focuses on corporate transactional and joint venture-related disputes, and Karl von Hase in Düsseldorf specialises in Italian-German commercial disputes.

The firm is one of the founding members of the European Federation for Investment Law and Arbitration (EFILA), a Brussels-based lobby group set up to promote the benefits of investor-state dispute settlement and counter the negative press it has received in the past few years.

A mixture of German and international clients, particularly from the energy and infrastructure sectors. Besides Vattenfall, it is acting for E.ON in a €300 million claim against Spain – one of numerous Energy Charter Treaty claims relating to the state’s renewable energy reforms.

The core of the team is in Hamburg, with others in Cologne and Düsseldorf. Further afield, Belgian attorney Els Van Poucke leads Luther’s practice in Singapore, where she is a foreign-registered lawyer.

The wider firm has seven other German offices, as well as other outposts in Brussels, London, Luxembourg, Shanghai and Yangon in Myanmar.

While it is more visible in investor-state cases, several of the firm’s big victories been in commercial arbitrations. In 2018, Luther helped E.ON and its subsidiary PreussenElektra largely prevail in an ICC case against Belgium’s Electrabel, a subsidiary of French energy group Engie. A Geneva-seated tribunal held E.ON was not obliged to pay a €321 million tax on nuclear power in Belgium and ordered Electrabel to pay around €11 million.

As part of a co-counsel team, Luther helped Italian client Ansaldo prevail in an ICC arbitration with Siemens over the use of heavy-duty gas turbine technology. The tribunal upheld Ansaldo’s right to use the technology under a winding-up agreement and rejected Siemens’ US$436 million claim.

The firm successfully represented a German automotive supplier in a VIAC arbitration against a Chinese joint venture; and achieved wins in two CIETAC arbitrations between a German electrical components supplier and a Chinese listed company in the solar sector.

In the investor-state arena, besides the settlement for Vattenfall, Luther helped Hamburg sailing-tours group Inmaris win a €3 million ICSID award against Ukraine in 2012 over an impounded vessel.

Luther is acting for sellers in a post-M&A arbitration based on alleged violations of antitrust compliance representations and warranties. The claim is being administered by the German Arbitration Institute.

The firm also supports university education in the area of public international, dispute resolution, and investment law – having helped to establish the Center for International Dispute Resolution at Bucerius Law School.

Walter Eberz, CFO of Wirtgen Invest Holding in Germany has used the firm for an ICC case and an investment arbitration against Czech Republic. He says Luther is his go-to German law firm for international disputes work.

He says he is very happy with the firm’s “high professionalism” and “significant investment arbitration expertise”.

What distinguishes Luther is its “high arbitration competence regardless of whether you are involved in a complex investment arbitration or in a post-M&A dispute”.

He commends Richard Happ for being “highly experienced” and having “lots of investment arbitration clout”, and senior associate Georg Scherpf for his “attention to detail” and extreme vigilance. He was also impressed with Scherpf’s cross-examination. 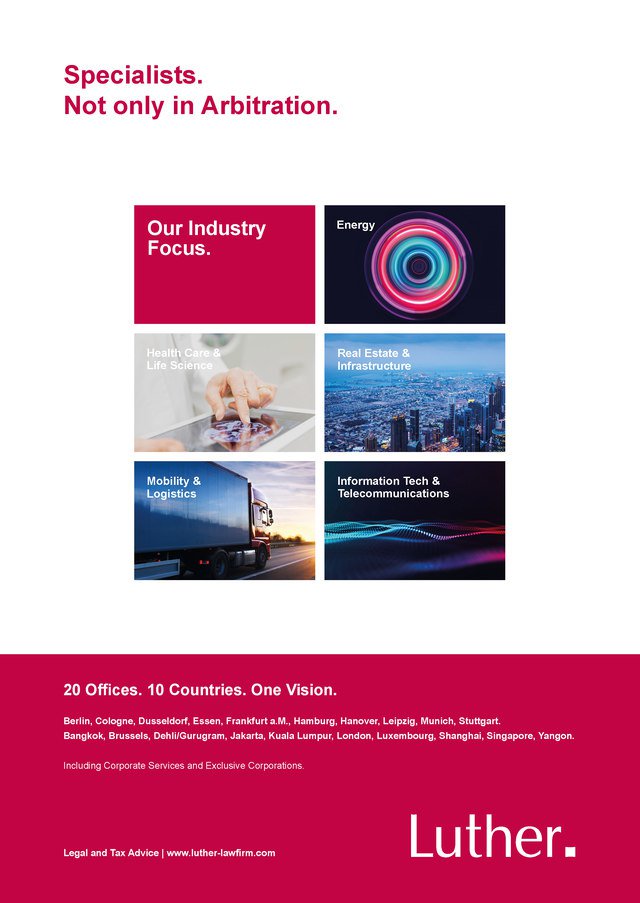