Following a big win for ConocoPhillips, the firm has several high-value disputes with LatAm governments on its books

Ferrere is the largest law firm in Uruguay and the only South American firm to have pursued cross-border expansion without the backing of a foreign firm, setting up offices in Bolivia, Paraguay and Ecuador.

The firm began to cooperate with US and UK firms on cross-border disputes in the late 1990s, and set up a dedicated dispute resolution department around that time, headed by construction partner Julio Iribarne. The collapse of some large private banks in Uruguay in 2002 meant the firm soon found itself co-counselling with arbitration teams at Allen & Overy, Shearman & Sterling, and Arnold & Porter. It represented JPMorgan Chase, Credit Suisse, Commerzbank and Dresdner Lateinamerika in two ICC cases against the Uruguayan government worth more than US$1 billion – and its success in those cases helped the arbitration group grow.

The practice received a boost in 2015 when it founded a new office in Quito staffed by a team from Ecuadorean firm Paz Horowitz. The Quito team includes Javier Robalino, who now co-chairs the arbitration practice with disputes head Sandra González in Montevideo.

Recently promoted partners Soledad Díaz and Daniel Robalino Orellana are also well regarded for their expertise. Díaz participates primarily in disputes arising out of construction and infrastrucure projects, while Orellana is involved in investor-state matters.

Besides five offices in Uruguay, the firm has bases in Cochabamba, Santa Cruz and La Paz (Bolivia); Quito, Manta and Guayaquil (Ecuador); and Asunción (Paraguay).

It has worked for private equity groups such as Elliott & Associates, Bluecrest Capital Management and Chile’s Linzor Capital (see “Recent events”). It’s also reported to have advised a national oil and gas operator YPF in Uruguayan court proceedings related to a US$1.4 billion ICC dispute over gas exports.

The firm helped ConocoPhillips settle a nine-year fight with Ecuador over the expropriation of two oil blocks, with the state agreeing to pay US$337 million in 2017 to satisfy an ICSID award. In the arbitration, Conoco also saw off most of a US$2 billion counterclaim advanced by Ecuador for alleged environmental damage to the Amazon rainforest (the state was awarded just US$40 million). Three Crowns, Freshfields and King & Spalding were co-counsel to Conoco in the case.

In 2015, the firm helped Austrian technology group Andritz secure a €40 million payment to settle a claim against the Finnish-Chilean owners of Uruguay’s largest pulp mill project, Montes del Plata. It partnered with WilmerHale on the case.

A co-counsel pairing with White & Case saw the firm help Indian steel company Jindal secure a U$22.5 million award against a Bolivian state mining company. Jindal is seeking confirmation of the award in a court in Washington, DC, after it was set aside by a court in Bolivia.

Ferrere successfully collaborated with Debevoise & Plimpton in representing Bahamian entity Perenco (Conoco’s partner in the disputed oil blocks) in a parallel ICSID case in which Ecuador had lodged an environmental counterclaim worth US$2.5 billion. The tribunal ordered the state to pay the client over US$394 million plus costs and interest – while granting Ecuador just over US$50 million for environmental damages.

Along wih Three Crowns, it acted for an international consortium of major oil companies including Repsol in an UNCITRAL claim worth US$470 million against Ecuador. The case concerned the consortium’s right to deduct interest from taxable income in respect of a loan taken to finance a project in the state. In April 2019, the parties reached a settlement after the state made changes to its tax regime.

Petrobras subsidiary Conecta turned to the firm for its ICC claim against Uruguay over the rising cost of gas imports. The tribunal found that the state had a duty to restore the economic balance of its concession agreement with the client. It also affirmed Uruguay’s obligation to negotiate any adjustments to the contract in good faith. Other claims made by both sides were dismissed.

It also acted for Colombia’s Internexa and its Peruvian subsidiary in its US$15 million claim against an Ecuadorian state-entity. The tribunal dismissed the client’s claims, while also throwing out the state-entity’s US$26 million counterclaim. The case was administered by the Inter-American Commercial Arbitration Commission.

Together with Freshfields, it is advising a Panamanian entity in an ICSID claim against Uruguay over the alleged expropriation of the country’s former national airline. The claimant is backed by New York private equity firm Tenor Capital.

In another high-stakes case, Ferrere has teamed up with King & Spalding to advise on a US$3.5 billion treaty claim against Uruguay relating to a mining concession. The client is Zamin Ferrous, a Jersey company owned by Indian magnate Pramod Agarwal.

Other clients include Glencore in a US$680 million UNCITRAL claim against Bolivia over the expropriation of mining assets; and Chilean investor Linzor Capital Partners in a dispute with Uruguay relating to the pharmaceuticals sector.

Sandra González spearheaded the setting-up of a new group called WWA LatAm, which aims to promote the role of Latin American women in arbitration.

Deputy general manager Sang-Youp Kim of Hyundai Engineering & Construction Company first instructed Ferrere for a series of disputes with the owner of a large power plant in Uruguay, before retaining the firm for other cases.

He says Ferrere has “an unparalleled level of dedication and expertise that no other Uruguayan based firm has”, he says. “They plan ahead … in terms of long term strategy, and manage every critical aspect of a case.”

Kim also praises their expertise in construction matters as well as in handling multiparty disputes, particularly those involving public authorities.

He commends Sandra González and Soledad Díaz for their “strategic view combined with full attention to detail”.

Another client – Igor Parente of Shell – says the firm is well established with appropriate fee arrangements coupled with a sound knowledge of the client’s business. They are always “willing to run the extra mile” and recommend strategies that “suits business priorities”, he says.

Sandra González once again receives praise for her impressive abilities, including being able to “speak the business language” and “deliver value to the bottom line”.

FERRERE advises and represents domestic and foreign clients in local and international commercial and investment arbitrations, in multi-jurisdictional disputes and under international law. It has proven experience in handling complex and economically and institutionally highly sensitive cases, including specifically cases against governments.

The FERRERE Arbitration team consists of attorneys who have practiced in this field for several decades. Many of them have studied and worked abroad. FERRERE is in a position to put together the team best suited to the needs of each case and client, combining the technical knowledge required by the case and experience in handling arbitration.

The group is consistently recognized as one of the most relevant in Latin America, a reputation gained by innovative strategies, meticulous preparation, creative lawyering and the determination to constantly surpass clients’ expectations.

Thanks to the experience and size of the arbitration group and the firm’s other practice areas, FERRERE is capable of putting together the team that best suits the needs of each case and each client, combining the technical knowledge the case requires with experience in handling arbitrations. 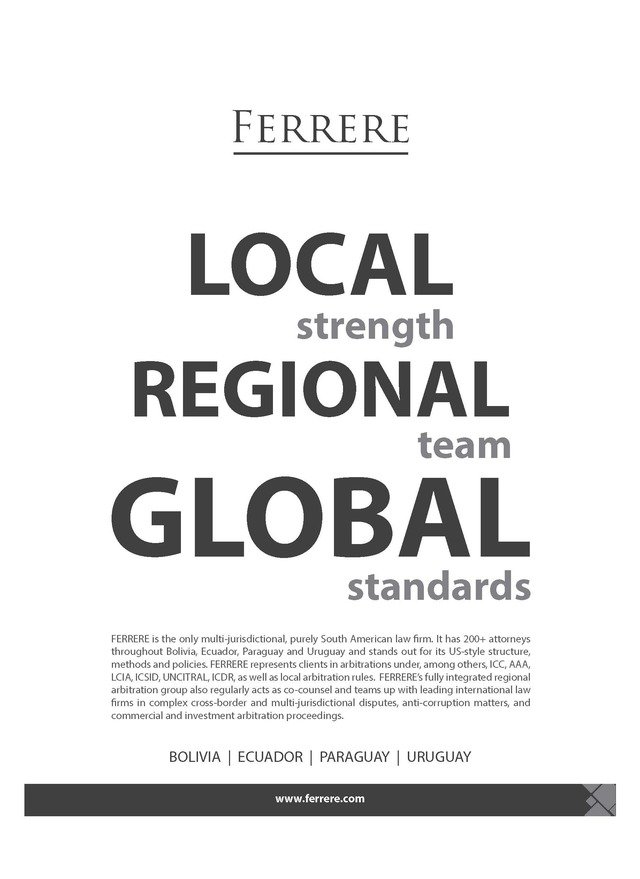