Dentons was the product of a 2013 merger between UK-US firm SNR Denton, Canada’s Fraser Milner Casgrain and Paris-based Salans. It merged with Dacheng Law Offices in mainland China in 2015, and agreed tie-ups with Rodyk & Davidson in Singapore and Australian firm Gadens a year later.

Of the different merger partners, Salans and Rodyk & Davidson enjoyed the strongest reputation in international arbitration, both having featured in the GAR 100 for several years. However, other merger partners bring some experience in this field, partly thanks to their transactional work for clients in oil and gas and financial services.

Salans was founded in Paris in 1978 by US and French lawyers and gained a name in the late 1980s for its trade work across the Iron Curtain. The firm handled some of the earliest disputes arising from Western investment in the Russia and CIS region, and East–West trade has continued to account for around half of its arbitration caseload, with much of the rest coming from Greater China, Africa and North America.

The legacy Salans practice (now the Europe arm of Dentons) is led from Paris by Jean-Christophe Honlet, with Barton Legum heading up the busy investment arbitration group. Legum joined in 2009 from Debevoise having formerly headed the US Department of State’s NAFTA claims division.

SNR Denton developed its arbitration practice as an offshoot of its energy work. Oil and gas clients provide a “guaranteed pipeline” of disputes work, the firm says. It has since branched out into inter­national trade and finance. Partner Liz Tout headed the legacy London practice for over a decade and now heads Dentons’ international arbitration practice in the UK.

The tie-up with Rodyk & Davidson brought in an impressive team in Singapore, headed by Philip Jeyaretnam SC, who is also chairman of local hearing centre Maxwell Chambers. Rodyk’s team includes maritime specialist Lawrence Teh, who co-chairs the IBA’s Asia-Pacific arbitration group and the Asia-Pacific Regional Forum.

Paris and London were the centre of the Salans arbitration practice and remain at the heart of the Dentons group, but recent hires and other mergers have made Moscow, New York and Singapore increasingly important hubs.

Dentons entered Latin America for the first time in 2016 through tie-ups with Colombian and Mexican firms.

The wider firm has 177 locations in 79 countries. It has offices in Cairo and Casablanca, and associate offices or alliance firms throughout Africa, which may explain its large amount of Africa-related gas price review work.

It has also won instructions from respondent states including Australia, China, Kyrgyzstan, Libya, Papua New Guinea and state-owned entities such as Russia’s Gazprom, Turkey’s Botaş and Venezuela’s PDVSA. The Indian government has used the firm for set-aside proceedings in London.

On the commercial side, it has acted for Engie, Total, Deutsche Bank, E Energija, Bouygues, Misen Energy, Nakheel, Omantel and Starwood Hotels.

Some of the firm’s most visible recent successes were for Gazprom in a long-running gas dispute with Lithuania. In 2016, it persuaded an SCC tribunal to throw out a US$1.9 billion claim by the Lithuanian energy ministry that alleged Gazprom had unfairly raised its prices. The Swedish courts upheld the award.

In an earlier iteration of the dispute, Dentons obtained an injunction from another SCC tribunal that restrained the ministry from litigating its claims in the Lithuanian courts. That part of the dispute went all the way up to the European Court of Justice, which affirmed in 2015 that anti-suit injunctions issued by arbitrators do not violate EU law. (The ECJ decision earned a GAR Award for most important arbitration decision of that year.)

It has a fine track record in investment treaty cases too. In 2017, it helped China secure the early dismissal of a claim filed by a South Korean investor in a golf course – only the second case China has ever faced at ICSID. Chinese firm Zhong Lun, also in the GAR 100, was co-counsel to the state.

Dentons played a behind-the-scenes role advising Australia in a multibillion-dollar treaty claim brought by Philip Morris over legislation mandating plain packaging of cigarettes. The case was thrown out as abusive in 2015.

The Paris office helped Delaware client Customs & Tax Consultancy (CTC) secure an ICC award against the Democratic Republic of the Congo in 2015 that is now thought to be worth over US$250 million including interest. The team also helped confirm the award in the French courts. However, a falling out with the client over fees has led to some unusual litigation in the Delaware courts (see “Recent events”).

In 2009, Salans helped Vivendi claw back lost ground in a battle over ownership rights in a Polish telecoms firm, winning a €1.9 billion award in an LCIA arbitration, followed by settlement in 2011, which saw Vivendi collect over €1 billion. It won its client US$2.3 billion in another LCIA arbitration, but against a by-then bankrupt Polish entity. The result, however, paved the way for Vivendi to receive a billion-dollar payment.

Lawyers in Dentons’ Port Moresby and Sydney offices helped the government of Papua New Guinea (PNG) obtain a permanent stay of a US$3 billion SIAC-administered arbitration commenced by a US-owned timber company. The PNG Supreme Court ruled that an arbitration clause referring to a defunct local institution was inoperative and that the dispute must be heard in local courts.

Together with Pinsent Masons, the firm came to Libya’s aid in defeating a US$95 million investment treaty claim by a Turkish joint venture over a water pipeline project. It is defending a state authority in a related contractual arbitration in which the joint venture has already won a partial award worth US$40 million.

After winning the US$250 million ICC award for CTC already mentioned, the firm obtained an unusual order from a Delaware state court authorising a broker to seize the award and market it for sale, so the proceeds can be used to satisfy legal fees owed by the client.

The firm secured the first set-aside of an investor-state award by an English court, persuading a judge that a tribunal had interpreted a treaty too narrowly when it declined jurisdiction over certain claims by private equity group Griffin against Poland.

In 2019 there was a positive result for Niko Resources in its long-running dispute with Bangladesh, as the ICSID tribunal rejected the state’s arguments that their joint venture and gas sale agreements with Niko were void as they had been procured through corruption.

Niko Resources later launched a new ICSID claim worth over US$100 million against Bangladesh and its national oil and gas company Petrobangla over withheld payments, again instructing Dentons for the dispute.

The firm helped Canadian-listed mining company Minera IRL to win US$34 million in a Lima-seated arbitration against a Peruvian state-owned development bank over the financing of a gold project.

A team in Amsterdam helped a subsidiary of Venezuela’s state-owned oil and gas company PDVSA to set aside an ICC award in the Hague Court of Appeal, on the ground that the underlying contract was procured through corruption.

A team in Washington, DC replaced Shearman & Sterling as counsel to Viorel Micula, as he seeks the enforcement of the US$331 million ICSID award rendered in favour of him and his brother Ioan in 2013.

James Langley and Esther McDermott were promoted to the partnership in London.

Brian Adolph, vice president of Canada’s Niko Resources, says the firm does an “excellent job”. Bart Legum “has exceptional knowledge, experience and skill” in conducting ICSID cases, while Gordon Tarnowsky QC and Anthony Cole in Calgary have been “key” in providing industry knowledge and experience of cases involving corruption allegations. 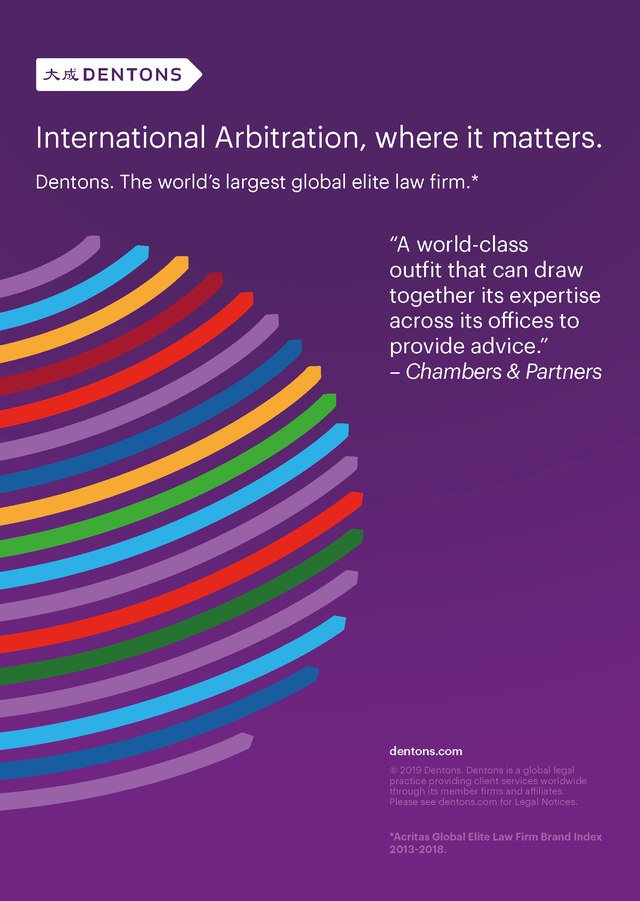