Darrois Villey was founded in 1987 and built a reputation as one of France’s leading business law firms. It boasts a lean partner-to-associate ratio, with over half of its lawyers being equity partners.

The firm launched its arbitration practice in 1995 by bringing in the well-regarded Matthieu de Boisséson and Pierre Duprey from Gide Loyrette Nouel, where they had worked on several large cases, including TML v Eurotunnel. The pair left for Linklaters in 2013.

The following year, French arbitrator and academic Laurent Aynès was brought in to lead the practice. In 2017, he was joined by Carine Dupeyron, who also sits as arbitrator and had previously worked at international firms in New York and Singapore.

Although Darrois Villey handles a variety of complex civil and commercial disputes, it has a primary focus on the M&A, securities and capital markets sectors.

It is used by a host of elite French corporations including a subsidiary of telecoms group Orange, which it represented in disputes worth several billion. Other French customers include defence contractor Naval Group, luxury fashion company Lanvin and state-owned company ODAS, which develops exports in defence, security and technology.

Darrois Villey defended a defunct subsidiary of French energy group Total against a US$22.4 billion UNCITRAL claim brought by two Russian provinces. Working with its former partners de Boisséson and Duprey at Linklaters, the firm secured a complete dismissal of the claim in 2017.

Once again working with Linklaters, the firm represented Matra Défense – a French national defence company and a subsidiary of Airbus Group – in a high-profile ICC dispute with Taiwan relating to a contract for the sale of missiles. Taiwan won damages and the firm continued to represent the Airbus subsidiary in enforcement proceedings before the French courts.

French food-products multinational Danone used the firm in an UNCITRAL claim against New Zealand dairy co-op Fonterra in a dispute over the costs of recalling baby formula after a false botulism scare. Danone won €105 million.

Darrois Villey is representing Nigerian energy company Sunrise Power and Transmission Company in a US$2.5 billion ICC arbitration against Nigeria and Chinese state-owned Sinohydro Corporation. The dispute relates to the construction and development of a high-profile hydroelectric power project in eastern Nigeria. Recent statements by Nigeria suggest the dispute has been settled, though this has yet to be confirmed.

The firm acted for French waste-to-energy company CNIM in a €180 million ICC claim against Bahrain relating to the construction of a waste plant. A tribunal threw out the client’s claim in January 2020. Three Crowns acted for Bahrain.

Another French waste-to-energy company, Veolia Environnement, is using the firm in a €300 million ICSID claim against Italy.

Darrois Villey has been instructed by two other French companies in separate ICC claims concerning a license distribution contract and fiber optic network.

Meanwhile, Aynès continues to be active as an arbitrator. He chaired an ICC tribunal which rejected claims worth over US$4 billion brought by a mining company against Burkina Faso. He is also chairing an UNCITRAL panel hearing a second claim brought by UAE-based Crescent Petroleum against Iran’s national oil company – over a gas supply deal that is already the subject of an arbitration worth US$15 billion.

Bernard Huet, a senior adviser to the CEO of Naval Group, says the defence contractor used Dupeyron in a sensitive case over the sale of two warships worth US$1 billion to Russia. The company was impressed with her “pragmatism”, her proximity to the issues at hand and her “original and efficient thinking process to reach the most appropriate solution”. 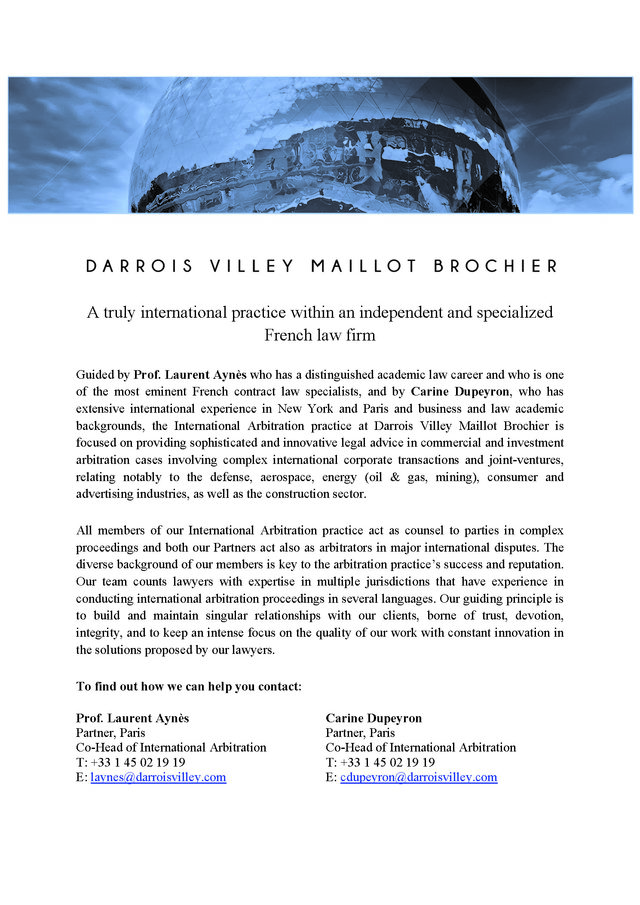