Crowell & Moring was founded in 1979 by a group of more than 50 lawyers who broke away from Jones Day. Its international arbitration practice was established in 2005 as an offshoot of its litigation practice. The group really took off two years later with the hire of a ready-made team from Fulbright & Jaworski, including Arif Hyder Ali, who became practice chair. It rapidly took on some weighty ICSID and commercial matters and earned its first appearance in the GAR 100 in 2008.

In 2012, Ali and three other partners left for Weil Gotshal & Manges, while another moved to Jones Day. Ian Laird – a Canadian with NAFTA experience who was part of Ali’s ex-Fulbright team – and a stalwart of the firm, George Ruttinger, began co-chairing the group after that. Former Greenberg Traurig partner David Baron arrived in 2017, bringing 20 years’ experience in investor-state work.

In 2019, Crowell hired the head of the UK litigation group at Squire Patton Boggs, Laurence Winston, in its London office. He represented Cambridge Analytica in its high-profile dispute over alleged data protection breaches and now co-chairs Crowell’s dispute resolution group alongside Laird.

Most of the international arbitration team is based in Washington, DC, with others in New York and London.

Mining companies regularly turn to the firm for investor-state claims, including Canada’s Khan Resources and Pacific Rim. Other investors have used it in claims against Egypt, Turkey and Lithuania.

Booking.com and Vistaprint have used the firm in domain disputes before the ICDR and the California-based internet regulator, ICANN. Bank of America and the US’s Duke Energy have turned to the firm for ICSID-related enforcement matters.

Crowell & Moring helped Khan Resources win a US$100 million Energy Charter Treaty award against Mongolia in 2015 over the cancellation of uranium mining licences. After Khan launched enforcement proceedings in the US, Mongolia paid US$70 million in 2016 to settle the case.

A team led by Stuart Newberger secured a damages award worth US$22 million against Pakistan in 2018 on behalf of Broadsheet, an asset recovery firm the state hired two decades ago to track down the assets of Pakistan’s former prime minister Nawaz Sharif. The firm saw off the state’s challenge to the award in the English courts in the following year. The politically sensitive dispute has played out against the backdrop of criminal proceedings against Sharif and his family in Pakistan, with information from the Panama Papers also playing a role in the case.

Crowell & Moring persuaded the US courts to recognise an ICSID award worth US$133 million against Argentina in 2013. A year earlier, it helped the US’s Duke Energy win confirmation of an US$18 million ICSID award against Peru in the DC courts after an earlier incarnation of the Crowell practice acted in the original arbitration.

The firm secured a US$490 million award for DIPCO, a consortium led by Kuwaiti logistics group KGL, in an ICC claim against Egypt’s state-owned Damietta Port Authority. The dispute concerned a terminated concession for a container terminal facility at the port and has also given rise to a threatened treaty claim.

A team led by Ian Laird continues to represent Russian businesswoman Marsha Lazareva in a US$100 million investment treaty claim against Kuwait over her prolonged imprisonment on what she says are erroneous charges of embezzlement. Lazareva has gone into hiding in the Russian embassy in Kuwait.

It is also representing Ireland and South Africa-based aviation group Starlite in an AAA dispute over the leasing of helicopters used to support US military operations in Afghanistan.

A former general counsel at a state-owned investment authority says a team led by Laurence Winston helped pursue enforcement of a high-value award against an individual who had fled the jurisdiction and concealed assets. The counsel says Winston and his team were “very responsive” and devised an amenable fee structure. Winston’s “handling of the matter and client skills were excellent.”

With dozens of lawyers practicing from our offices in Washington, D.C., New York, London, and Brussels, we represent clients from a wide range of industries and geographic regions in disputes under international and bilateral trade agreements and treaties. Lawyers in our IDR practice work in a diverse range of languages such as Arabic, Chinese, French, German, Hebrew and Spanish. 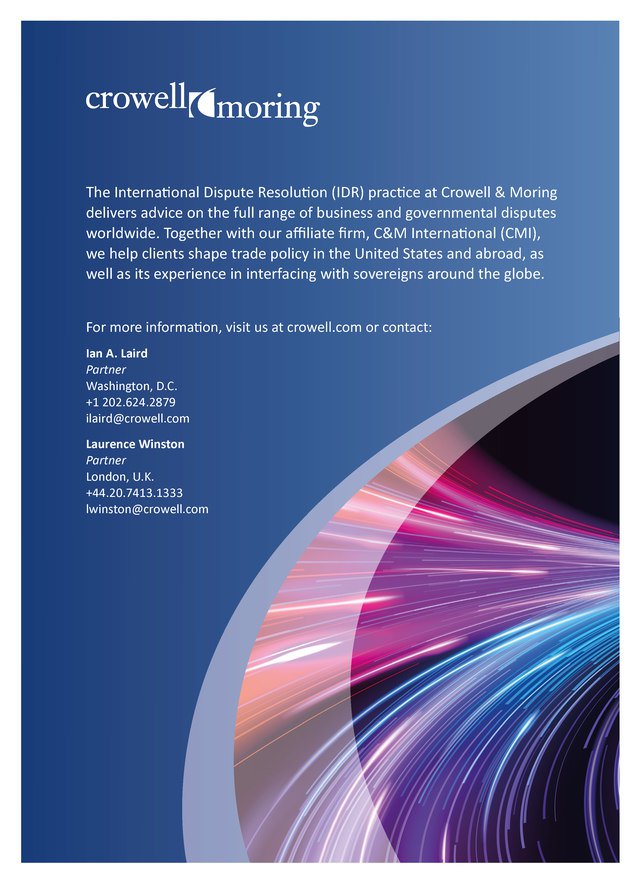