Defending an Abu Dhabi fund in a high-profile battle with Malaysia’s 1MDB, and a UK government entity in a decades-long dispute with Iran

The new department was led by John Beechey, who went on to serve as president of the ICC International Court of Arbitration. Over 15 years, the group became a major international arbitration brand – strong in London, New York and Paris. It also became something of a training ground for lawyers seeking to get a start in the field. But a tough financial crisis and the departure of Beechey and another key partner, Jason Fry, for the ICC left the group looking a little lean.

The reinvigorated group is now co-led by Audley Sheppard (who became a QC in 2015 and chair of the LCIA Board in 2017) and Fry, who rejoined the Paris office in 2012 after five years with the ICC (and became a QC in 2020). Fry’s deputy at the ICC, Simon Greenberg, also joined in Paris and was rapidly promoted to partner.

Other names to know in London are Rob Lambert, Alex Panayides, Marie Berard, Janet Whittaker and Jessica Gladstone (who joined from Debevoise & Plimpton in 2015 and brings public international law experience). Ignacio Suárez Anzorena in Washington, DC, and Romesh Weeramantry in Hong Kong specialise in investment treaty arbitration. Ben Luscombe and Sam Luttrell in Perth are also active in this area.

The wider firm has a great name in banking and finance, leading to some exciting banking-related arbitrations involving institutions such as Goldman Sachs, HSBC, Crédit Agricole, Standard Chartered Bank and Standard Bank of South Africa.

Some rare examples of state clients include Taiwan, as respondent in a treaty claim relating to the banking sector; France, in a €300 million dispute over a rail link; and São Tomé and Príncipe, in a law-of-the-sea arbitration filed by Malta over the detention of an oil tanker.

In 2013, the team won a US$1.4 billion partial award for Shell and its consortium partners in an Abuja-seated arbitration against the Nigerian National Petroleum Corporation. A Nigerian court later enjoined the arbitration from continuing. A US court petition to enforce the award was stayed pending a challenge to the Nigerian injunction.

There have been some noteworthy settlements. Lawyers in the Singapore office helped a group of private equity investors including SBI Macquarie, Standard Chartered and JM Financial-Old Lane settle a US$1.3 billion dispute with Indian airport infrastructure group GMR in 2018.

The firm is advising Abu Dhabi’s IPIC as it resists efforts by Malaysian sovereign wealth fund 1MDB to overturn the settlement of an LCIA arbitration. 1MDB says the settlement – which will cost it around US$6 billion – was grossly unfavourable and part of a conspiracy to conceal the misappropriation of billions of public funds by former government officials.

The English Court of Appeal ruled in late 2019 that 1MDB could proceed with its bid to overturn the settlement, and granted it an injunction to restrain IPIC from pursuing two new LCIA cases to enforce the settlement.

In another high-profile court battle, the firm is helping a UK government entity to resist enforcement of a £128 million ICC award in favour of Iran’s ministry of defence, relating to military sales contracts terminated in the wake of the Iranian revolution of 1979. In early 2020, the Court of Appeal in London confirmed that Iran is not entitled to interest that has accrued on the award since the ministry became the target of EU sanctions.

In 2019, the firm’s Perth and Hong Kong offices helped Australian mining company Kingsgate settle a lawsuit against its political risk insurers concerning the expropriation of a gold mine in Thailand. The US$58 million settlement will allow Kingsgate to finance an investment treaty case against Thailand relating to the mine, in which Clifford Chance is also acting.

It acted for Spanish construction company ACS in an ICC arbitration over a €1.7 billion submarine natural gas storage facility.

After obtaining a US$95 million LCIA award in favour of Russian client Vladimir Chernukhin against oligarch Oleg Deripaska in 2017, the firm successfully defended the award before the English Commercial Court and Court of Appeal.

The firm won a US$10 million treaty award for a subsidiary of US hedge fund manager Elliott Management against Poland and is now defending the award in set-aside proceedings in the Belgian courts.

It is advising Chicago company Invenergy in another treaty claim against Poland over investments in the wind energy sector. Other energy clients at ICSID include Germany’s STEAG in a claim against Spain concerning reforms to renewable energy subsidies; and a hydroelectric subsidiary of Italy’s Enel for a claim against Panama over delays to the construction of a power line.

Mining companies also continue to use the firm at ICSID. It is representing Australia’s Tantalum International in a dispute with Egypt over a tin and tantalum mine. Canada’s Red Eagle is using it for a claim against Colombia after its mining operations were found to overlap with an environmental preservation zone. And it is advising Canadian-owned client Cortec Mining in annulment proceedings where it seeks to revive an ICSID claim against Kenya that was thrown out because of a violation of local environmental laws.

Madrid partner José Antonio Caínzos was appointed inaugural president of the Madrid International Arbitration Centre, formed in 2019 through the merger of three rival centres in Spain.

Jean-Pierre Grandjean left his role as head of disputes in Paris along with counsel Marguerite Aynès to open a new boutique.

Four partners were promoted in 2019 – Lei Shi, based in Shanghai and Beijing; Tom Walsh in Hong Kong; Ignacio Díaz in Madrid; and Dorothée Vermeiren, who heads the disputes team in Brussels. Louis Alexis-Bret in Paris and Peter Harris in Tokyo were promoted to counsel.

He describes partner Alex Panayides as “on the ball” and adds: “Whether he’s on a plane or in a meeting halfway around the world, a response to your question is guaranteed.” The client also praises Paul Coates, whose “measured and calming approach” will make him “a worthy partner someday soon”. 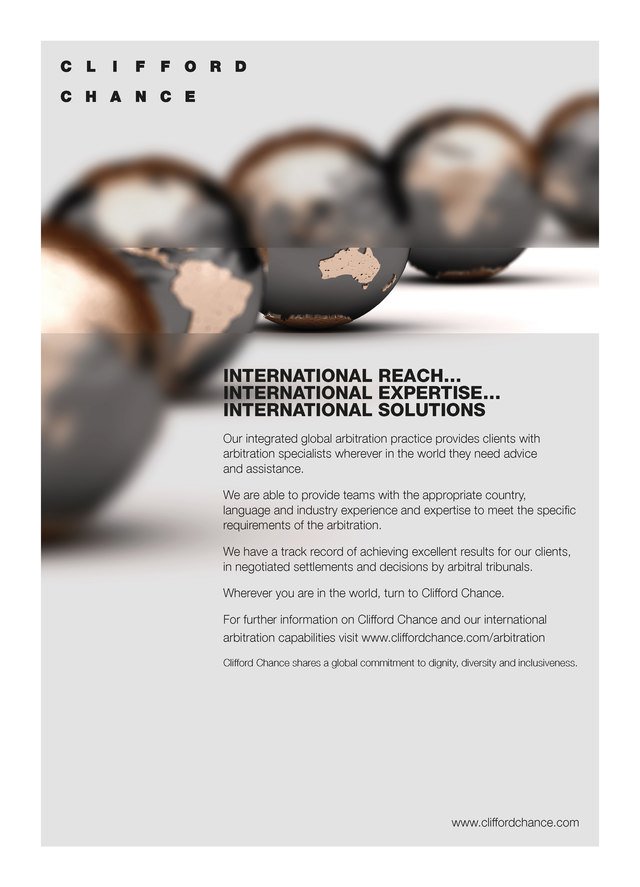