Arguably Malaysia’s most prominent international arbitrator, Abraham has sat on over 55 commercial cases. He is Malaysia’s appointee to the ICSID panel of arbitrators, and represents the state on the ICC Court and as a member of the Permanent Court of Arbitration. He is a member of the advisory boards of the International Council of Commercial Arbitration and the Kuala Lumpur Regional Centre for Arbitration (KLRCA).

Various Malaysian government-linked companies have turned to the firm’s lawyers, notably power utility Tenaga Nasional; oil and gas producer Petronas; and property group Malaysian Resources Corporation Berhad. The firm also acts for the attorney general of Malaysia, the Royal Malaysian Police and the Malaysian Anti-Corruption Agency. It recently represented the Association of Private Hospitals of Malaysia. Media conglomerates, such as satellite TV group Astro, also use the firm, as do high-net-worth individuals.

Before the Malaysian courts, Cecil Abraham has been representing former prime minister Najib Razak in his defence against allegations of malfeasance in public office, including relating to the management of sovereign wealth fund 1MDB.

Abraham and his team enjoyed notable wins at Zul Rafique. In 2014, they helped Malaysian real estate company Triumph City win a US$59 million KLRCA award against the Malaysian state of Selangor in a dispute over the termination of a joint venture agreement. The team defeated the state government’s attempt to set aside the award in the local courts but an appeal is pending.

Since 2017, the firm has represented the government of Malaysia against a claim brought by a foreign party under the ASEAN treaty.

In another case, the team helped an Astro unit prevail on claims that it was not in breach of a non-disclosure agreement, also obtaining US$1 million in costs.

The firm is active in various construction arbitrations under the AIAC and otherwise.

It scored a win for Triumph City Development in enforcing an arbitral award worth over 300 million ringgit against the Malaysian state of Selangor. The dispute relates to the breach of a joint venture to develop a piece of land. In January last year the High Court of Malaysia refused to entertain Selangor’s petition to set aside the award, while ruling to have the award enforced in favour of the client.

The firm is also acting for a Malaysian state-owned electricity company in disputes against a project partner over lease agreements for the operation of independent power plants.

Cecil Abraham continues to sit as an arbitrator in both commercial arbitrations as well as treaty claims.

Kuang Hong Lim of Ireka Corporation, an infrastructure and real estate corporation, who has used the firm in a domestic arbitration and in separate set aside proceedings commends the firm for its “outstanding ability to turn around difficult cases”.

Citing an example, he says they had roped in the firm for arguments in the Federal Court in a case that had previously failed in the High Court and Court of Appeal, and were not disappointed. Besides securing a win, he says, the firm was able to “identify key issues, refine them and present them at the appeal in a clear and polished manner”.

In his view, the firm is “best placed” to advise and act for clients who find themselves in a difficult arbitration.

The client adds that Cecil Abraham is “pre-eminent”, and his services are “outstanding”. Partner Aniz Ahmad Amirudin is also praised for his “exceptional work” and “practical approach” that is “sensitive to the business needs of his clients”. 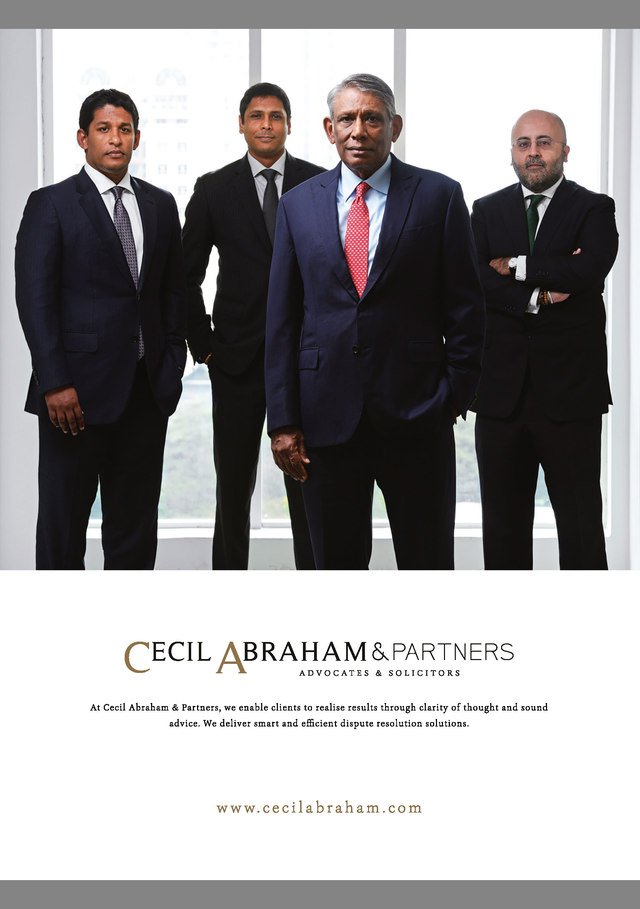