Two wins for Pluspetrol and a new ICSID claim

This Peruvian boutique was founded in 2000 by arbitrator Alfredo Bullard and former Shearman & Sterling lawyer Huáscar Ezcurra, offering expertise in both arbitration and competition law – its lawyers include former members of the Peruvian Antitrust Agency.

It practises both commercial and investment arbitration, advising Peruvian and international clients.

The firm is representing Argentina’s Pluspetrol in a pair of arbitrations in relation to an oil block in Peru. Other high-profile clients include Peruvian conglomerate Intercorp and a subsidiary of Italian energy company Enel.

The firm helped an Enel subsidiary to defeat the bulk of a US$10 million claim by Electroperú, the Peruvian national energy company, over a power purchase agreement. In a 2015 award the tribunal said the firm’s client was liable to pay US$1 million but ordered Electroperú to pay the majority of the arbitration costs.

For Peru’s NG Education Holdings Corp, the firm helped to defeat a US$75 million claim over an alleged breach of a stock acquisition agreement. The tribunal granted NG Education all of its counterclaims and ordered the other party to assume the costs.

Bullard Falla Ezcurra acted for Pluspetrol in a complex US$250 million UNCITRAL against the Peruvian National Oil Company (PNOC), obtaining an award that confirmed its client position and an order that the other side assume all arbitration costs – around US$2 million.

In a separate case for Pluspetrol, again filed by PNOC but this time at the Inter-American Commercial Arbitration Commission, the firm again secured a favourable award in a dispute totalling US$300 million over a licence agreement for an oil block.

Alongside King & Spalding, the firm is acting for Argentine-Peruvian consortium Kuntur Wasi in an US$285 million ICSID claim against Peru over its concession to build and operate an airport for tourists travelling to Machu Picchu.

It also helped Brazilian-owned La Virgen secure a favourable award in a US$80 million ICC dispute regarding the construction, operation and maintenance of and hydroelectric power plant in Peru.

As an arbitrator, Bullard was appointed by Toronto-based miner Galway Gold to hear an ICSID claim against Colombia over a ban on mining operations in environmentally protected wetlands.

He was also part of a tribunal that awarded a Canadian company US$34 million in a Lima-seated arbitration against a Peruvian state-owned development bank over the financing of a gold project.

A company using the firm for various arbitrations in the last five years says that Bullard is “a star, and a local and international recognised figure”.

Ezcurra “shines in cross-interrogation”, while Bruno Doig is “a solid and very dedicated support for them”.

Our firm constantly represent clients in complex controversies, in both commercial and investment arbitrations, under the ICSID, ICC, and Uncitral Rules, among others. As counsels, we have experience representing clients from US, Argentina, China, Colombia, Brasil, Italy, among others, in controversies regarding investments, construction, energy, transport, oil & gas, etc. Our current portfolio exceeds USD500 Millions in claims. Furthermore, our partners also act constantly as arbitrators or legal experts both in international commercial and investments arbitrations. Senior partner Alfredo Bullard regularly acts as arbitrator in major international arbitrations. His pending cases exceeds USD 1 Billion in claims. He also acts regularly as legal expert in international arbitrations, with current cases for almost USD 2 Billions in claims.

We try to break paradigms in our international arbitration practice. Our team includes economists and we have also worked with theater directors to improve our performance in hearings. We focus very much in details to provide our clients multidisciplinary yet precise solutions. We have a multi-cultural team of 10 lawyers and two economists, from Perú, Colombia and Europe, with experience working in Law firms from South America, US and Europe. We are able to provide our clients a deep and sophisticated legal analysis, but also a cultural understanding of their controversies. 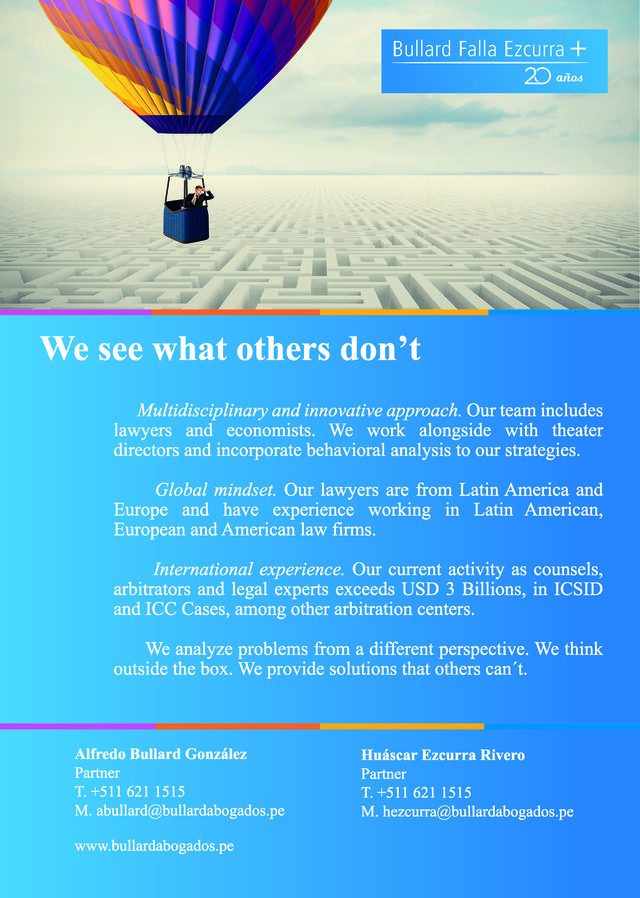