The Canadian firm is acting in many big-ticket NAFTA arbitrations

One of Canada’s largest and oldest law firms, Borden Ladner Gervais (BLG) ventured into arbitration in the 1980s as an offshoot of its work in international trade matters. The group developed under the guidance of two key partners: Gerald W Ghikas QC (now an independent arbitrator in Vancouver) and Edward Chiasson, an arbitrator in an early NAFTA investor-state case who returned to the firm in 2016 after nine years as a judge at the Court of Appeal for British Columbia.

Recently promoted partner Hugh Meighen joined the Toronto office around the same time after five years with Freshfields in London and Dubai, having also served as an assistant legal counsel at the Permanent Court of Arbitration in The Hague.

The team expanded in 2018 with the hires of Milos Barutciski and Matthew Kronby from Bennett Jones. Barutciski was counsel to Lone Pine Resources in a NAFTA chapter 11 case, while Kronby is the former director general of Canada’s Trade Law Bureau, and is an expert in NAFTA investor-state claims.

Another name to know is Bruce Gailey, a former in-house arbitration counsel at Alstom who joined BLG as a foreign consultant in 2015 working from Zurich.

The arbitration team is based primarily in Vancouver, although there are experienced partners in Calgary, Toronto and Montreal. The firm also has an office in Ottawa.

The government of Mexico has been a prominent client, particularly in NAFTA-related matters. At their previous firms, members of the group have also had experience defending Turkey and South Africa and representing private investors in claims against Argentina, Yemen and Georgia.

In 2017, the firm secured a victory on behalf of an Icelandic geothermal power producer in an Iceland-seated Stockholm Chamber of Commerce arbitration with the proponent of a potential new aluminium smelter in Iceland.

In the following year it secured a favourable settlement for South American and Canadian clients in a dispute over the construction of a mine in Central America, with several hundred millions of US dollars in dispute.

Borden Ladner Gervais represented Canadian-based interactive whiteboard developer SMART Technologies in appealing a summary dismissal of its counterclaims in a US$18 million ad hoc commercial arbitration seated in Calgary. The appellate tribunal hearing the matter set aside the dismissal. The firm ultimately obtained favourable judgment on the counterclaims. A Canadian court rejected the opposite party’s challenge to these findings.

On the investment treaty side, Mexico has once again turned to the firm to seek the set-aside of a partial award on jurisdiction before the Ontario Superior Court of Justice, in a NAFTA claim initiated by a casino owner over Mexico’s alleged legislative actions that deprived the claimant of its investments. The claim in the arbitration is worth more than US$100 million.

The Calgary office continues to act for Geophysical Service Inc in a potential US$2.6 billion NAFTA claim against Canada relating to the handling of proprietary seismic data. The notice of arbitration was issued in April 2019.

Partner Matthew Kronby is acting for former Yukos shareholder Luxtona Limited in set-aside proceedings against Russia, as part of a broader set of actions arising from the Yukos dispute.

Partner Sarah McEachern was appointed the firm’s head of litigation in Vancouver, while Cristina Birks was promoted to counsel in the firm’s Montreal office. 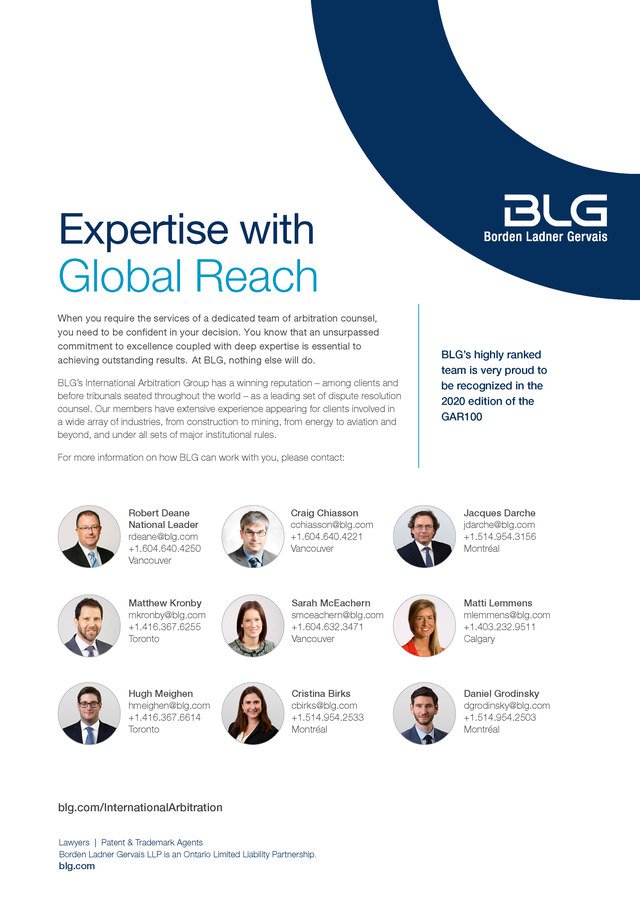