Founded in 1902 and now one of Singapore’s largest firms, Allen & Gledhill started growing its international arbitration practice in the late 1980s under the leadership of former partner Michael Hwang SC. The practice now has 30 lawyers and is co-led by partners Chong Yee Leong, a member of SIAC’s board of directors, and Dinesh Dhillon, the president of the Singapore Institute of Arbitrators. Andrew Yeo heads the wider litigation and dispute resolution department. He is the vice chair of the ICC’s Singapore arbitration group.

The practice expanded significantly in 2013 with the hire of five partners from Rajah & Tann – including Chong Yee Leong, who had headed that firm’s international arbitration team. It also recruited former heads of SIAC’s India and China desks.

Members of the firm have been closely involved in Singapore’s various dispute resolution initiatives. Former senior partner Lucien Wong, a much-respected banking and finance lawyer, was chair of the SIAC board of directors before becoming Singapore’s attorney general in 2017. Chong Yee Leong and recently retired partner Ang Cheng Hock SC were part of a committee that drew up the plans for the Singapore International Commercial Court, and the firm also has a number of members on the SIAC Users’ Council.

Beside its base in Singapore, Allen & Gledhill works with associate firms in Myanmar, Malaysia and Indonesia. The Myanmar firm is headed by Minn Naing Oo, a former chief executive officer of SIAC who is qualified to practise in Singapore and New York. He was born in Myanmar, speaks the language fluently and has helped to draft the country’s new arbitration law. In Malaysia Allen & Gledhill has been associated with Rahmat Lim & Partners.

Early last year, the firm announced a strategic alliance with Indonesia’s Soemadipradja & Taher. As part of that alliance it welcomed a new partner to its foreign law practice group.

Clients on public record include Sony subsidiary MSM Satellite in an ICC case over media rights for Indian Premier League cricket. It is also known to have acted for the Philippine National Bank and other financial institutions in a US$350 million SIAC case relating to a distressed steel plant; and for Lufthansa in a dispute with a Thai IT services provider.

Most of the firm’s cases aren’t public but it says it obtained a significant win for a US Fortune 500 company in a dispute with a government-linked natural gas supplier. It also acted for one of the world’s largest media and entertainment companies in an arbitration over media rights worth US$1 billion, with the client winning its case in full. Another win came in a US$145 million dispute over an investment in a Thai property project.

It has also helped an Asian state-owned entity obtain a US$200 million award against a European bank, which had been represented by a top US disputes firm.

There was an award worth more than US$150 million in favour of another client in a case conducted under the auspices of the Chinese Arbitration Association. The client was a company in receivership in a dispute with a bank that had been pledged its assets.

In the Singaporean courts, it successfully defended a US$1.4 billion ICC award relating to an airport terminal project.

Further back, it helped the Philippines defeat a US$565 million ICC claim by a German-led consortium over a concession to build and operate a terminal at the international airport in Manila, as co-counsel with White & Case.

Allen & Gledhill successfully resisted a challenge before the Singapore High Court to a US$296 million award issued in favour of casino operator Global Gaming Asset Management (GGAM). The award found Manila-based Bloomberry liable for the wrongful termination of an agreement giving GGAM the management of Solaire Resort & Casino, a luxury complex in the heart of Entertainment City, the Philippines’ Manila-based answer to Las Vegas. The firm was co-counsel with Drew & Napier.

It scored another win in the Singapore courts for two companies – one Chinese and the other Korean – who are the defendants in an arbitration brought before the SIAC under a clause that provides for “arbitration in Shanghai”. Last October, the Singapore Court of Appeal quashed a lower court’s ruling that concluded the seat of arbitration was Singapore, and that Shanghai was actually just the venue.

A Dubai-based media company used the firm in a dispute over the termination of its exclusive rights to distribute a movie in the SAARC region. The firm obtained an emergency award restraining the licensor from entering into similar distributorship agreements with other persons inconsistent with its client’s rights. Ultimately the case settled last year.

It is defending the Sri Lankan government in an arbitration over land in Battaramulla owned by the claimants that was acquired by the state pursuant to a legislation. The claimants allege that the acquisition and compensation have frustrated their efforts to develop a hotel on the land, resulting in loss of profits. The amount in dispute is over US$21 million.

The firm also successfully represented Malaysia’s Gulf Hibiscus in the Singapore Court of Appeal over a lower court’s decision to lift a stay of a lawsuit brought against by the client against its joint venture partners.

Vivekananda N – a former SIAC deputy registrar who helped launch the institution in Mumbai – was promoted to foreign law partner.

The firm promoted Melissa Mak and Nicholas Tan to the partnership. Both lawyers focus on commercial litigation and international arbitration.

Tomoyuki Nozaki of Japanese construction company Obayashi Corporation, who used the firm in an arbitration and a subsequent award challenge, says Allen & Gledhill was “precise” and “to the point”.

He commends Chua Kee Loon for his “quick response” and “excellent” organisation of all the issues involved.

Overall, the firm was “convincing to the management”, he says.

With a long history of legal excellence stretching over 110 years, Allen & Gledhill is one of the largest law firms in South-east Asia with more than 550 lawyers practising in offices located in Singapore, Myanmar, Malaysia and Indonesia.

Our International Arbitration Practice consists of 30 arbitration practitioners. The team has a strong regional focus, primarily representing clients from South-east Asia, China, Japan, Korea and India in disputes relating to investments, infrastructure, energy, construction and engineering projects. As a direct result of our client diversity, the team possesses an impressive level of working knowledge of various industries and businesses. Our clients include corporations from all over South-east Asia, global multinationals, international firms, government agencies and government-linked entities.

We set ourselves apart with our unique knowledge of the local commercial conditions in the region when formulating strong persuasive cases. This has resulted in our proven track record in obtaining successful outcomes in high-value and complex international arbitrations regardless of whether such proceedings are seated in Singapore or elsewhere in Asia.

Our reputation as a top-tier arbitration practice is evidenced by our consistent and strong rankings in leading publications including Global Arbitration Review and The Legal 500 Asia Pacific. We have received various awards and accolades from independent commentators and were ranked Tier 1 for International Arbitration by Benchmark Litigation Asia-Pacific (2019). In addition, we were named National Law Firm of the Year – Singapore at Asialaw Asia-Pacific Dispute Resolution Awards (2017) and Litigation & Dispute Resolution Firm of the Year by Asian-MENA Counsel (2017). 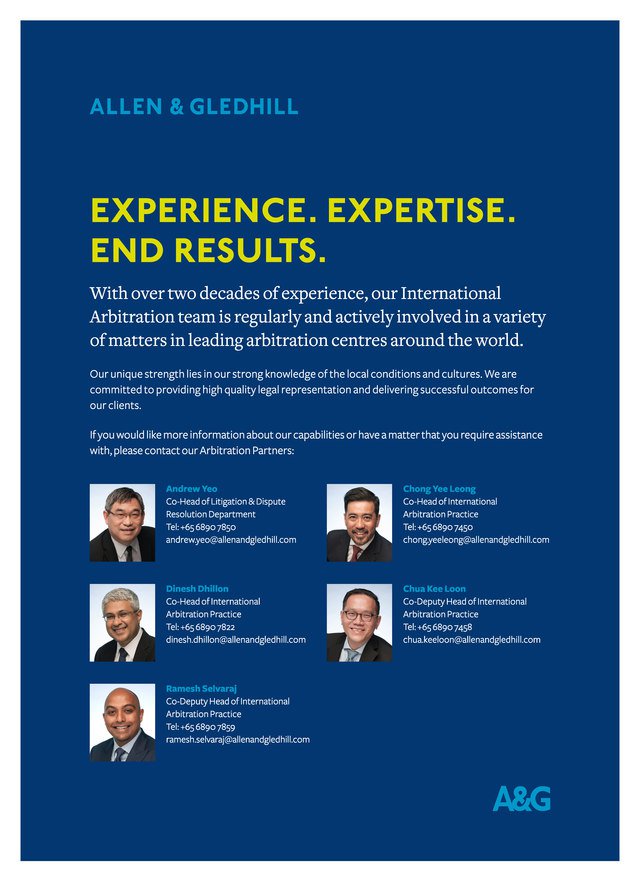