In 1919, Covington & Burling represented Norway in the Norwegian Shipowners arbitration with the United States in The Hague, winning the then enormous payout of US$12 million – a case that helped establish the early principles of expropriation and is still taught in law schools today.

The firm has kept up its work in the area into modern times. Indeed, when GAR launched in 2005, Covington was among the few Washington, DC players with a strong reputation in commercial and investment arbitration – particularly cases with a Latin American dimension.

However, the past few years have also seen the departure of Verhoosel to Three Crowns and the loss of other senior figures, including well-known arbitrators Oscar Garibaldi and Thomas Johnson, who left for independent practice and the Iran-US Claims Tribunal, respectively.

The anchor of the practice is Washington, DC but the firm has other offices in the US as well as London, Brussels, Beijing, Seoul and Shanghai. Its Asian presence and experience in India and Latin America put Covington in a good position to work on “South-to-South” disputes.

It has acted for US pharmaceuticals group Eli Lilly in a NAFTA claim against Canada and Mexican food conglomerate Gruma in a US$500 million claim against Venezuela; to varying degrees of success (see ‘Recent events’).

A rare state client is Ukraine (and its national gas company Naftogaz) in various investor-state and state-to-state matters arising from Russia’s 2014 annexation of Crimea.

The firm’s long-running work for ExxonMobil against Venezuela has produced some good results. A US$7 billion ICC claim against state oil company PDVSA ended in 2011 with a US$908 million award in Exxon’s favour, which the state satisfied in the following year. A parallel ICSID claim ended in 2014 with an award for Exxon worth US$1.6 billion, though that figure was offset by the sums already paid in the ICC case.

Another ICSID case against Venezuela saw Covington help US-based oil services company Tidewater win US$46 million plus interest in 2015 (it had claimed around US$250 million), although an annulment committee later reduced the award by around US$10 million. Efforts to enforce the award continue in the US.

Also at ICSID, Covington secured a win for Jordan in a long-running treaty dispute with a Turkish construction firm. The state received legal costs.

In 2012, a Covington team persuaded a panel in Stockholm to award damages to a group of Spanish minority shareholders in Yukos. Although the sum awarded was small in the scheme of things (US$2 million) the arbitrators put a value on Yukos of more than US$60 billion at the time of expropriation. However, the award was later set aside in the Swedish courts.

Covington has a big name for insurance disputes, having helped Exxon recover US$780 million from insurers for the Exxon Valdez oil spill and advised BP America in insurance coverage proceedings for liabilities arising from the explosion of the Deepwater Horizon rig in the Gulf of Mexico.

Covington secured an ICSID award worth nearly US$500 million for Spanish subsidiaries of Mexican food group Gruma in an ICSID claim against Venezuela over the expropriation of their tortilla and corn flour businesses. The state has since applied to annul the award.

Another client, South Korean engineering group Hyundai, won interim relief in the Chilean courts to prevent its insolvent Brazilian partner, in a project to build the largest suspension bridge in Latin America, from selling shares in the joint venture while an ICC arbitration is pending.

However, drugmaker Eli Lilly met with less success, as a NAFTA tribunal rejected its US$374 million NAFTA claim against Canada over the revocation of drug patents.

The firm continues to act for Ukraine’s Naftogaz in a US$2.6 billion investment treaty claim against Russia over the seizure of assets in Crimea following the Russian annexation of that territory in 2014, and has also helped the Ukrainian government make amicus curiae submissions in five other treaty cases against Russia brought by private Ukrainian investors that had assets in Crimea.

It is also acting for Ukraine in a politically sensitive state-to-state arbitration with Russia over the alleged usurpation of its rights in oil-rich waters adjacent to Crimea, including in the Black Sea.

In a pair of unusual cases, which have both now settled, Covington acted for Swiss labour unions in disputes with global fashion brands over their adherence to the Bangladesh Accord, drawn up in the wake of a garment factory collapse in Dhaka to raise standards of safety. The cases in The Hague have been used as an example of how arbitration can be used to enforce human rights in a business context. 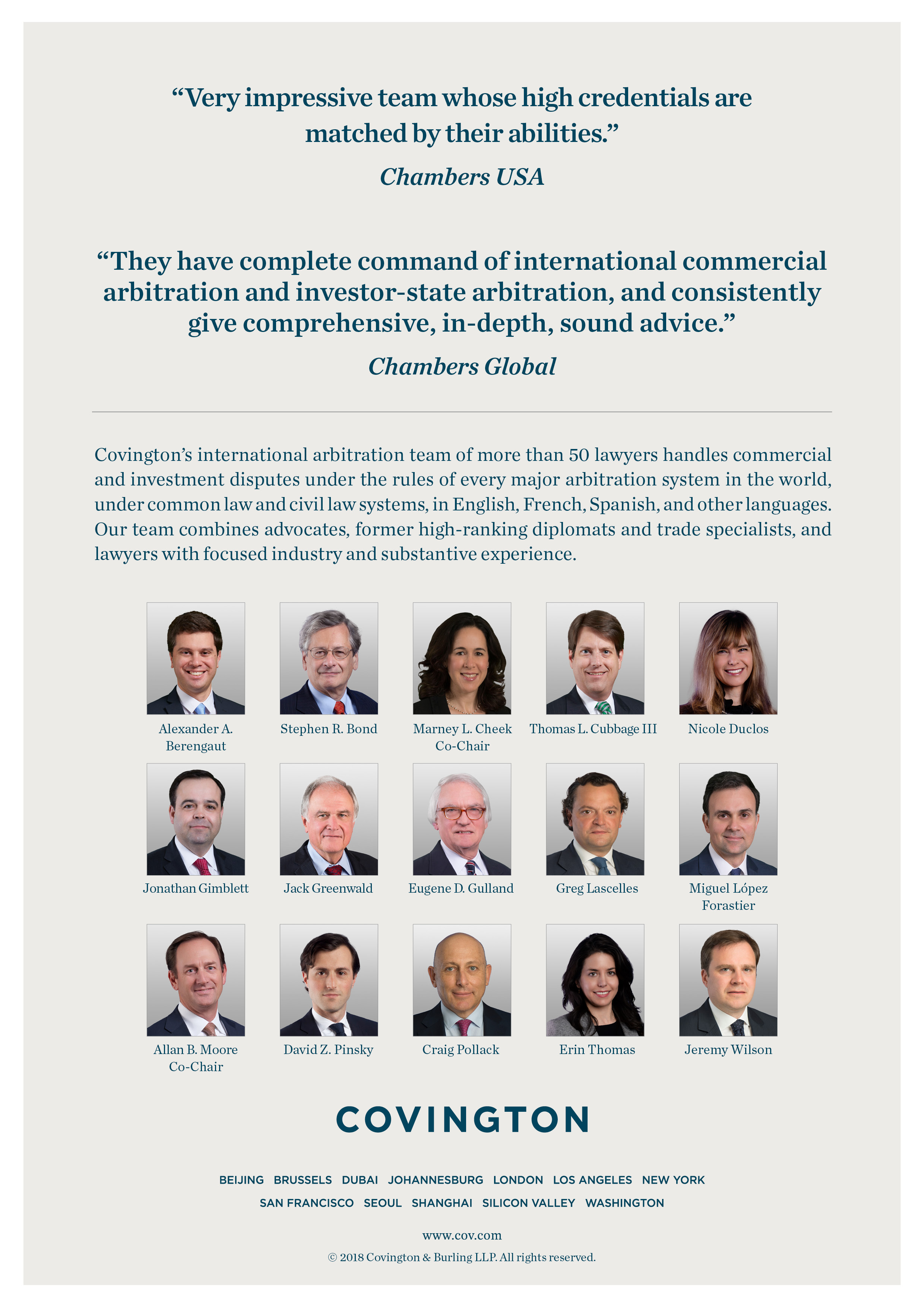