Crowell & Moring’s international arbitration practice was established in 2005 as an offshoot of its Washington, DC-based litigation practice. The group really took off in 2007 with the hire of a ready-made team from Fulbright & Jaworski, including Arif Hyder Ali, who became practice chair. It rapidly took on some weighty ICSID and commercial matters, and earned a place in every edition of the GAR 100 from 2008–2012.

In that year, Ali and three other partners left for Weil, Gotshal & Manges, while another moved to Jones Day. These days, the group is co-chaired by Ian Laird – a Canadian with NAFTA experience who was part of Ali’s ex-Fulbright team – and a stalwart of the firm, George Ruttinger. A more recent arrival to the partnership is English lawyer Adrian Jones, who joined from Fasken Martineau in 2014 and has experience in oil and gas, mining and financial services disputes.

While the practice may not enjoy the same profile as before, it still acts on some significant investor-state cases.

Most of the international arbitration team is based in Washington, DC, with others in New York, London and Brussels. The firm recently closed its offices in Cairo and Riyadh.

Mining companies regularly turn to the firm for investor-state claims, including Canada’s Khan Resources and Pacific Rim. Other investors have used it in claims against Egypt, Turkey and Lithuania.

Booking.com and Vistaprint have used the firm in domain disputes before the ICDR and the California-based internet regulator, ICANN. Bank of America and the US’s Duke Energy have turned to the firm for ICSID-related enforcement matters.

The firm has a reputation for its creative approach to alternative fee arrangements, which it has employed in its arbitration work.

One of the firm’s most impressive recent results was helping Khan Resources win a US$100 million Energy Charter Treaty award against Mongolia in 2015 over the cancellation of uranium mining licences. After Khan launched enforcement proceedings in the US, Mongolia paid US$70 million in 2016 to settle the case.

But a seven-year ICSID case brought on behalf of mining company Pacific Rim against El Salvador came to a disappointing end in 2016, with a tribunal throwing out the US$250 million claim on the merits and awarding the state US$8 million in costs.

The firm had better luck on the enforcement side of things. It persuaded the US courts to recognise an ICSID award worth US$133 million against Argentina in 2013. A year earlier, it helped the US’s Duke Energy win confirmation of an US$18 million ICSID award against Peru in the DC courts after an earlier incarnation of the Crowell practice acted in the original arbitration.

Alongside former colleagues from Fasken, Adrian Jones helped South African platinum producer Impala Refining win a US$200 million LCIA award in 2015, which was enforced by a US court.

David Baron joined as partner in Washington, DC from Greenberg Traurig, bringing 20 years of experience advising investors, states and state-owned entities in international litigation and arbitration. James Saulino was promoted to counsel in DC but left in October 2017 to become an attorney for the FBI.

Partner Flip Petillion, who had recently worked for Crowell in a series of ICANN disputes, left the Brussels office to set up his own arbitration boutique, taking three associates with him.

The firm defended the developers of the Damietta port in Egypt against an ICC claim brought by South Korean industrial group Doosan. The case ended in January 2018 with a US$72 million award in favour of Doosan. The case concerned a contract for supply of gantry cranes.

With dozens of lawyers practicing from our offices in Washington, D.C., New York, London, and Brussels, we represent clients from a wide range of industries and geographic regions in disputes under international and bilateral trade agreements and treaties. Lawyers in our IDR practice work in a diverse range of languages such as Spanish, French, German, Italian, Russian, Swedish, Hebrew, Greek and Arabic. 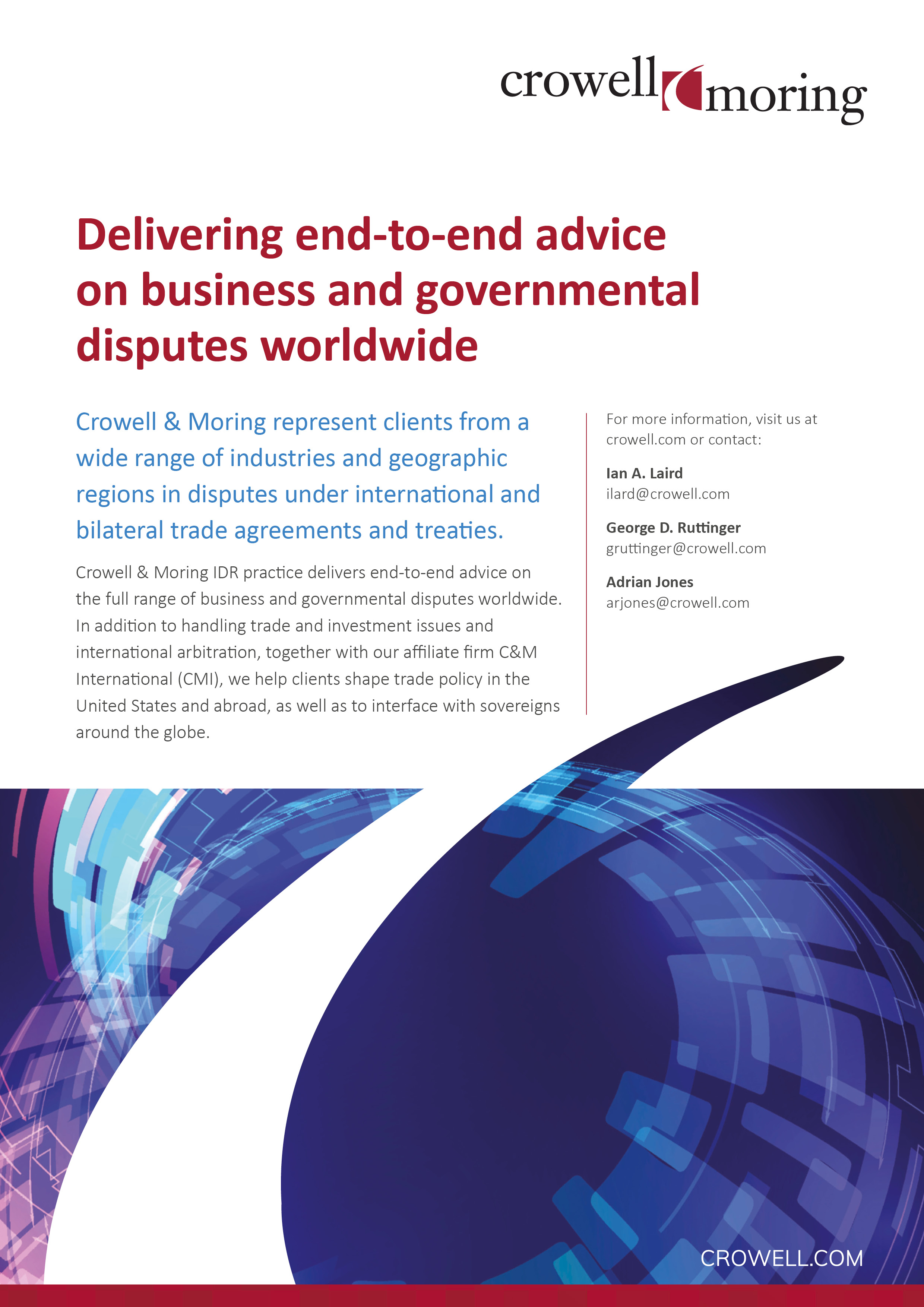