Bringing claims against Egypt and Poland while defending Libya

Dentons was the product of a 2013 merger between UK–US firm SNR Denton, Canada’s Fraser Milner Casgrain and Paris-based Salans. It merged with Dacheng Law Offices in mainland China in 2015 and agreed tie-ups with Rodyk & Davidson in Singapore and Australian firm Gadens a year later.

Of the different merger partners, Salans and Rodyk & Davidson enjoyed the strongest reputation in international arbitration, both having been listed in the GAR 100 for several years. However, other merger partners bring some experience in this field, partly thanks to their transactional work for clients in oil and gas and financial services.

Salans was founded in Paris in 1978 by US and French lawyers and gained a name in the late 1980s for its trade work across the Iron Curtain. The firm handled some of the earliest disputes arising from Western investment in the Russia and CIS region, and East–West trade has continued to account for around half of its arbitration caseload, with much of the rest coming from Greater China, Africa and North America.

The legacy Salans practice (now the Europe arm of Dentons) is led from Paris by Jean-Christophe Honlet, with Barton Legum heading up the busy investment arbitration group. Legum joined in 2009 from Debevoise having formerly headed the US Department of State’s NAFTA claims division.

SNR Denton developed its arbitration practice as an offshoot of its energy work. Oil and gas clients provide a “guaranteed pipeline” of disputes work, the firm says. It has since branched out into inter­national trade and finance. Partner Liz Tout headed the legacy London practice for over a decade and now heads Dentons’ international arbitration practice in the UK.

The tie-up with Rodyk & Davidson brought in an impressive team in Singapore, headed by Philip Jeyaretnam SC, who is also chairman of local hearing centre Maxwell Chambers. Rodyk’s team includes maritime specialist Lawrence Teh, who co-chairs the IBA’s Asia-Pacific arbitration group and the Asia-Pacific Regional Forum.

Paris and London were the centre of the Salans arbitration practice and remain at the heart of the Dentons group, but recent hires and other mergers have made Moscow, New York and Singapore increasingly important hubs.

Dentons entered Latin America for the first time in 2016 through tie-ups with Colombian and Mexican firms.

The wider firm has 145 offices in 60 countries. It has offices in Cairo and Casablanca, and associate offices or alliance firms throughout Africa, which may explain its large amount of Africa-related gas price review work.

On the commercial side, it has acted for Gazprom, Engie, Total, Deutsche Bank, E Energija, Bouygues, Misen Energy, Nakheel, Omantel and Starwood Hotels.

Some of the firm’s most visible recent successes were for Gazprom in a long-running gas dispute with Lithuania. In 2016, it persuaded an SCC tribunal to throw out a US$1.9 billion claim by the Lithuanian energy ministry that alleged Gazprom had unfairly raised its prices.

That was after Dentons obtained an injunction from another SCC tribunal that restrained the ministry from litigating its claims in the Lithuanian courts. That part of the dispute went all the way up to the European Court of Justice, which affirmed in 2015 that anti-suit injunctions issued by arbitrators do not violate EU law. The Lithuanian Supreme Court later enforced the SCC award. (The ECJ decision earned a GAR Award for most important arbitration decision of the year.)

It has a fine track record in investor-state cases too. In 2017, it helped China secure the early dismissal of a treaty claim filed by a South Korean investor in a golf course – the second-ever case China has faced at ICSID. GAR 100 firm Zhong Lun was co-counsel to the state.

Though it didn’t appear as counsel of record, Dentons played a behind-the-scenes role advising Australia in a multibillion-dollar treaty claim brought by Philip Morris over legislation mandating plain packaging of cigarettes. The case was thrown out in 2015 as an abuse of process after Philip Morris was found to have engaged in a corporate restructuring to benefit from treaty protection when the dispute was already foreseeable.

In 2008, Salans won a US$125 million award for a pair of Turkish telecoms clients – Rumeli Telekom and Telsim – in an ICSID claim against Kazakhstan. In another case, it helped Kyrgyzstan settle a claim brought by Oxus Gold without any payment by the state or its instrumentalities.

In 2009, Salans helped Vivendi claw back lost ground in a battle over ownership rights in a Polish telecoms firm, winning a €1.9 billion award in an LCIA arbitration, followed by settlement in 2011, which saw Vivendi collect over €1 billion. It won its client US$2.3 billion in another LCIA arbitration, but against a by-then bankrupt Polish entity. The result, however, paved the way for Vivendi to receive a billion-dollar payment that spared its blushes somewhat.

Dentons was instructed by UK’s Darley Energy for a €1.4 billion claim against Poland over a potash exploration licence. It is acting for a Darley shareholder in a related ICC claim.

Other instructions come from a Dubai pipeline manufacturer for an ICSID claim against Egypt over an agreement to build a sewage network for a Cairo suburb; and a US transport company for a potential US$118 million NAFTA claim against Canada relating to a port and railway line damaged by flooding.

Dacheng Dentons won a widely discussed ruling in the Shanghai courts, preventing the recognition of a SIAC award against its Chinese client on the grounds that the arbitral institution had appointed a sole arbitrator to decide the dispute against the express wishes of the client and the terms of the arbitration agreement.

The Paris office helped client Customs & Tax Consultancy (CTC) obtain confirmation of a US$200 million ICC award against the Democratic Republic of the Congo in the French courts.

For energy client PV Crystalox, it won a €28.1 million ICC award in an arbitration with a Taiwanese photovoltaic company over the supply of silicon wafers. The firm was co-counsel with Norton Rose Fulbright.

It won US$14 million for US aviation company GA Telesis in an ICC case against an insolvent Russian airline, having won US$22 million for the client the previous year.

Alongside her former firm Pinsent Masons, Meriam Al-Rashid in the New York office continues to defend Libya in parallel treaty and contract cases under ICC rules brought by Turkish investors in a project to extend an underground water supply system.

Turkish state-owned pipeline company Botas¸ is using Dentons as it attempts to annul an ICSID award in favour of Engie subsidiary Baymina Enerji in a dispute over a gas supply contract to Ankara.

It represents Belgian solar investor Blusun in ICSID annulment proceedings where it hopes to revive a €187 million Energy Charter Treaty claim against Italy.

The Paris and Kiev offices have also been defending subsidiaries of Sweden’s Misen Energy in a Stockholm Chamber of Commerce arbitration brought by Ukraine’s largest natural gas producer, a subsidiary of state-owned Naftogaz.

Bart Legum joined the board of the SCC, while Almaty partner Aigoul Kenjebayeva was appointed to the ICC court.

The firm also added new partners in Amsterdam, San José and Tashkent thanks to combinations with local firms.

Canada’s Niko Resources has been using Dentons for a long-running ICSID case against Bangladeshi state entities relating to two gas fields. The company’s vice president Brian Adolph says the firm is “doing an excellent job”. Bart Legum “has exceptional knowledge, experience and skill” in conducting ICSID cases, while Gordon Tarnowsky QC and Anthony Cole in Calgary have been “key” in providing industry knowledge and experience of cases involving corruption allegations.

Chris Outhwaite, director of CTC, says the firm’s performance in its seven-year dispute with the Democratic Republic of the Congo was “outstanding”. Jean-Christophe Honlet and Augustin Barrier were “ably supported by a first class team all of whom clearly had a good grasp of the case and contributed during the case preparation stage. The team were all multilingual, which was ideal”. 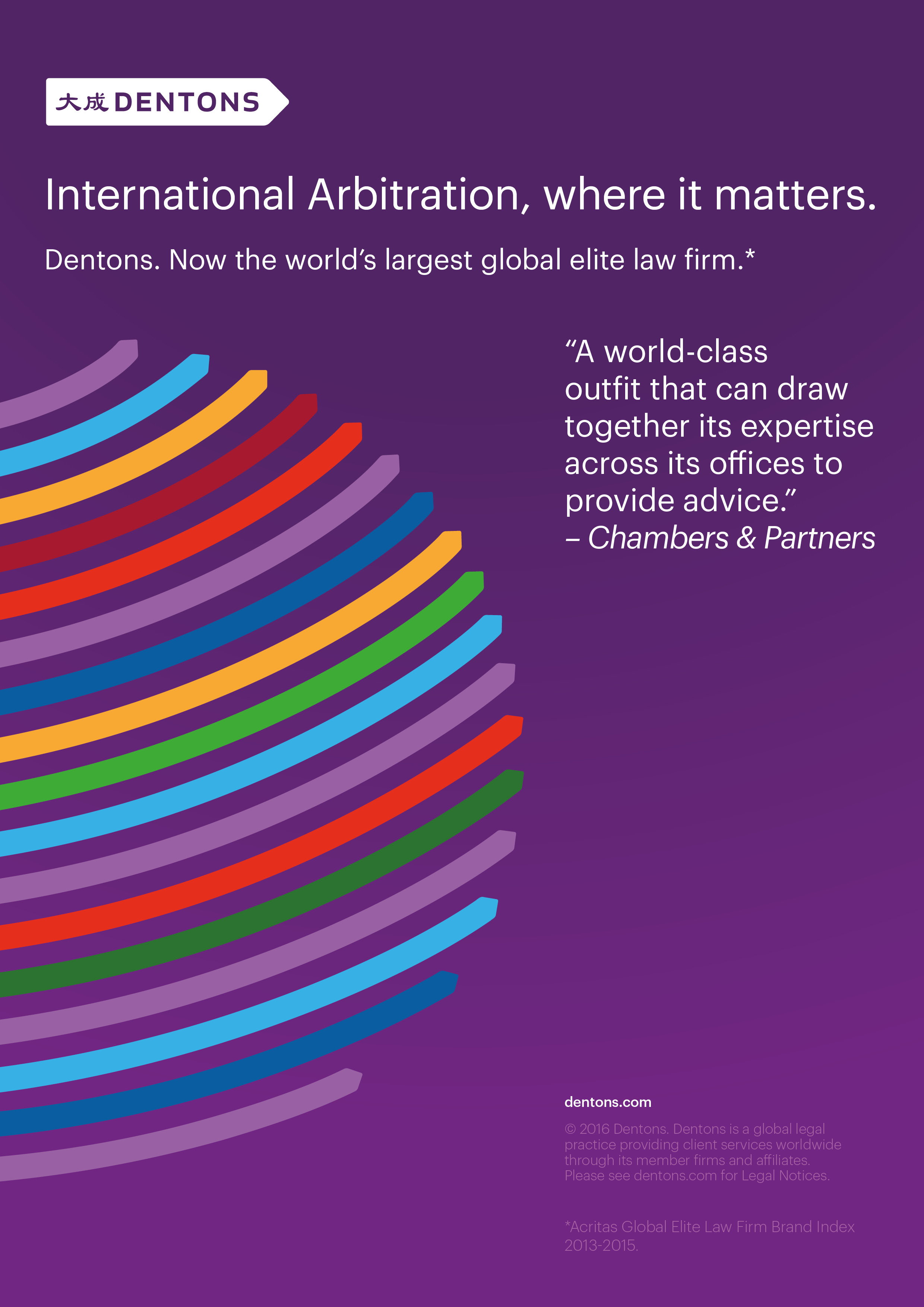