Economic Laws Practice was formed in 2001 with a focus on commercial and tax law. Its arbitration practice was co-founded four years later by Vikram Nankani and Madhur Baya. Nankani left in 2015 after being appointed senior counsel, two years after Baya left to set up his own firm.

The practice is now led by Naresh Thacker in Mumbai, with support from Akshay Kishore in Mumbai – who joined in 2017 from Ashurst in Singapore – and Ashish Prasad in New Delhi.

Originally, the practice didn’t deal with disputes worth more than US$20,000. Now, the figure can range from US$10 million to several hundred million dollars. Its clients are in sectors as diverse as mining, commodities, engineering and construction, shipping, insurance, infrastructure, and equipment and services.

It has conducted arbitrations in India, England, Singapore, South Korea, Germany and the US under a variety of international laws and institutional rules.

Most of the team is based in Mumbai, though the firm also has team members in Delhi, Ahmedabad and Pune.

Some of India’s large business houses – including, Reliance, Larsen & Toubro, and Essar – are clients. Indian property tycoon Niranjan Hiranandani has used the firm in a high-profile dispute with his daughter (see below).

Most of Adani Group’s arbitrations are conducted by ELP, whether in the coal, commodities or oil and gas sectors.

Multinational clients include engineering and construction group McDermott and Sterlite Technologies, which is a subsidiary of the Vedanta oil and gas group; and Malaysian crane manufacturer IMPSA. It also counts Indian multinational Welspun and Anglo-Swiss chemicals company Ineos as clients. Sony Pictures and UAE based engineering procurement company Global Supplies are also clients.

The firm’s reported successes at the ICC include representing India’s largest metal and mining company in a product liability claim against a German company; a Swiss multinational coal trader in a dispute with a Singapore subsidiary of India’s largest coal traders; and one of the largest Indian engineering companies in a dispute over a US$200 million EPC contract awarded in Singapore.

It also successfully represented India’s largest privately owned port in an ad hoc arbitration under English law against a state-owned insurance company – the first major insurance claim under a port package policy in India. Another client was a manufacturer of oil and gas exploration and production equipment in an ad hoc arbitration with a government enterprise over a contract for the supply of production platforms.

A case on behalf of one of the parties to a US$50 million split that involved a complex web of cross-holdings in shareholdings and properties also led to a victory for ELP.

Together with DLA Piper, ELP defended Niranjan Hiranandani and his son Darshan against an LCIA India claim by his daughter Priya Hiranandani Vandrevala over a deal to develop property in India. Most of her US$500 million claim was knocked out, with a tribunal awarding only US$60 million against ELP’s clients in 2016.

In court, the firm succeeded in defending the joinder of a third party to an arbitration agreement in a Singapore arbitration by invoking “alter ego” principles. The third party had moved the Indian court to suspend the arbitration.

The firm successfully defended Malaysian client IMARTEK against a claim of more than US$55 million brought by Jawaharlal Nehru Port Trust, also winning a US$4 million counterclaim.

ELP helped Sony Pictures Network prevail in a dispute with leading Indian actor Dhanush over the commercial exploitation of a dubbed version of a Tamil movie. The client succeeded in its claims and the parties reached a settlement on agreed terms.

The firm represented ISGEC Heavy Industries in an ICC arbitration against ATTS Inc which had brought claims of over US$12.5 million. The matter was settled before the final hearing, with the firm significantly reducing the settlement to a value of US$1.75 million.

At SIAC it is lead counsel in an ongoing English-seated dispute between Dutch and Bangladeshi parties involving both English and Bangladeshi law. It is also representing an Indian engineering client in a dispute with a Colombian party under an exclusive agency agreement.

ELP is also defending Essar Oil against claims brought by Indian Oil Corporation concerning a “take or pay” obligation in a gas supply agreement. The dispute has been valued at over US$103 million.

It appeared in the first-ever arbitration at the new Mumbai Centre for International Arbitration, for the local subsidiary of a German conglomerate seeking payment for a coal delivery from Indonesia.

Economic Laws Practice ("ELP") is a leading full-service Indian law firm established in the year 2001 by eminent lawyers from diverse fields. The firm brings to the table a unique combination of professionals which constitutes of lawyers, chartered accountants, economists and company secretaries; enabling us to offer services with a seamless cross-practice experience and top-of-the-line expertise to our clients.

ELP is recognized internationally as a thought-leader in India for arbitration. We have represented clients in proceedings before various institutions such as the ICC, LCIA, LCIA India, SIAC, LMAA, GAFTA, KLRCA, etc. and in ad-hoc proceedings around the world, with amount in disputes ranging from a few millions to billions of dollars. Our approach to commercial disputes and our industry specific expertise has ensured most effective representation of our clients.

With offices in Mumbai, New Delhi, Pune, Ahmedabad, Bangalore and Chennai, ELP has a team of over 180 qualified professionals having professional acumen in diverse practice areas. We work closely with leading global law firms in the UK, USA, Middle East and Asia Pacific region; enabling us to provide a pan India and global service offering to our clients.

ELP is the firm of choice for clients due to our commitment to deliver excellence and has been ranked amongst the Top 10 firms in the country; with the highest Client Satisfaction score of 9/10 amongst the Top 10 firms as per RSG India Report 2015. The firm has also recently been recognized as a Tier 1 firm in India for our Dispute Resolution expertise by The Legal 500 Asia Pacific 2016; and has won the Best Dispute Resolution Firm in India award at the Legalera Awards 2015. 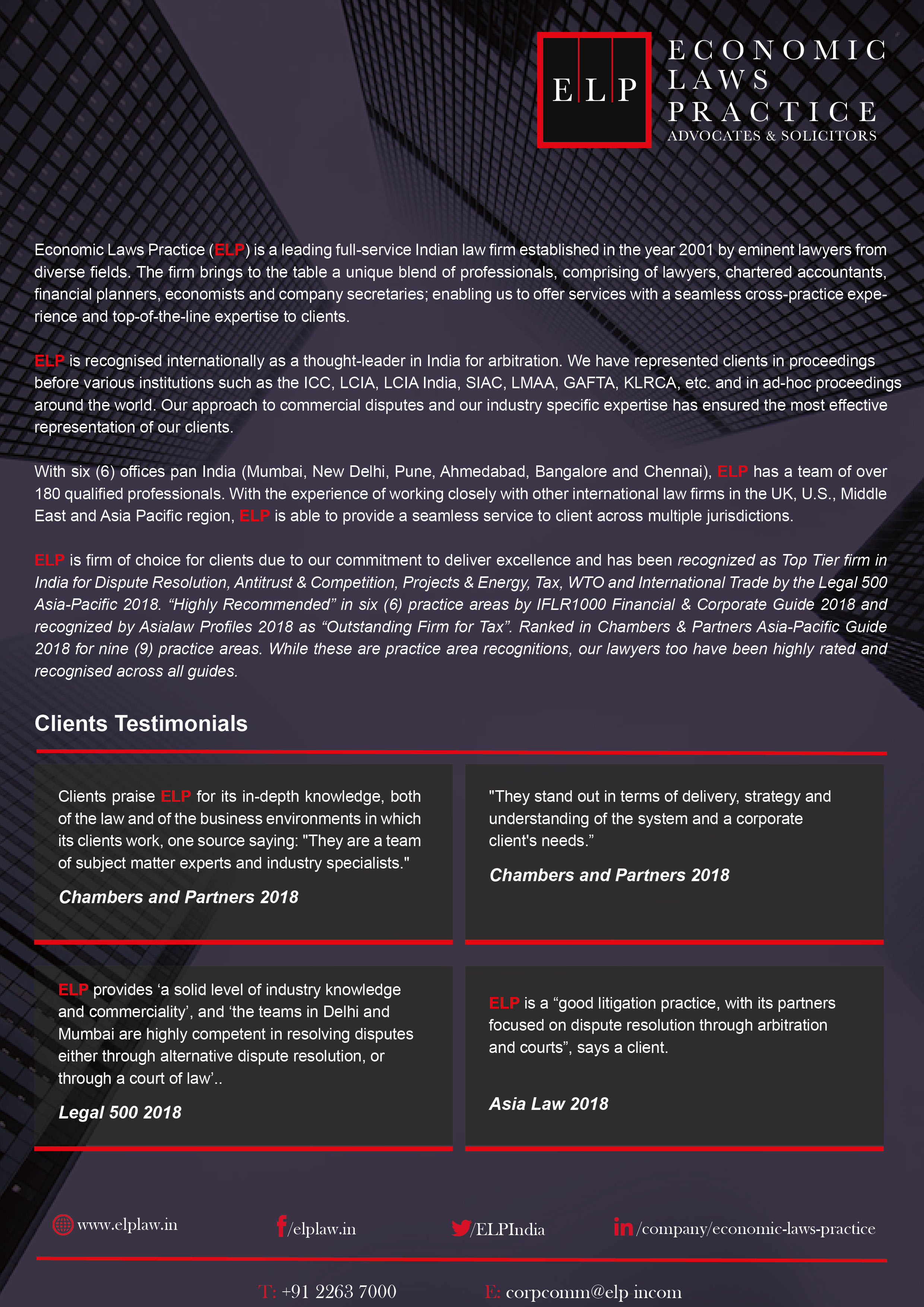