This Cairo-based firm was founded in 2005 by John Matouk and Omar Bassiouny with an emphasis on corporate and M&A, project finance and capital markets alongside its disputes work.

Matouk, who heads the disputes group, is a New York-qualified lawyer and US-Egyptian dual national.

In 2015, the firm hired partner Amr Abbas from another Egyptian firm, Sharkawy & Sarhan. He previously spent three years at White & Case, where he worked on investor-state and commercial arbitrations. Abbas has also advised Egypt’s competition authority and had a hand in drafting natural gas legislation.

Osman Mowafy is the third partner in the group and heads the litigation practice.

The team has experience as counsel in ICSID and ICC cases as well as matters before Egypt’s main arbitral institution, the Cairo Regional Centre for International Commercial Arbitration.

Clients in the telecoms sector regularly use the group, including Telecom Italia and the UAE’s Etisalat. It has also advised ArcelorMittal, Spain’s Union Fenosa Gas and hotel chain Melia International, US commodities trader Cargill, and California-based Agilent Technologies.

Meanwhile Egyptian contractor Orascom Construction and carmakers Skoda, Mitsubishi and Nissan are among those that have used it for local litigation matters.

Matouk Bassiouny paired with Latham & Watkins in 2015 to represent Luxembourg steelmaker ArcelorMittal in a US$600 million ICSID claim against Egypt concerning the construction of a steel plant near the Red Sea. The dispute settled a year later on confidential terms.

The firm obtained a US$68 million award for the Emirates International Investment Company in an ICC claim against a major cross-border company, winning costs and legal fees. It is advising the same client in a shareholder dispute with a prominent Egyptian business tycoon relating to control of a major steel company.

It won a Cairo Centre award worth 40 million Egyptian pounds for German-owned construction client Bamag MENA in a dispute over a waste-water plant project and then successfully enforced it. There have been other successes for client Middle East Glass in a mediation of a shareholders dispute; and for Cargill in a Cairo Centre case against two Egyptian companies.

In the courts, it has helped a Japanese carmaker block claims of US$1 billion by enforcing an arbitration clause, and successfully defended a Swiss Chambers award in favour of client Agilent against an annulment challenge.

The firm has been advising Union Fenosa Gas on Egyptian law issues in relation to its US$2 billion dispute with Egypt concerning a natural gas supply agreement. The dispute has given rise to two claims against an Egyptian state entity pending before the Cairo Centre, and an ICSID case against the state.

Matouk Bassiouny is also defending Etisalat Misr in a US$36 million Cairo Centre arbitration filed by Vodafone Egypt. The dispute relates to an interconnection agreement and regulatory administrative decisions by the telecoms regulator.

A more unusual case saw it successfully defend the former CEO of Orange Egypt, Alex Shalaby, in criminal proceedings where he had been accused of espionage.

In early 2018, the firm hired partner Menha Samy, a former legal counsel for the Middle East and Africa at French fashion company Chanel.

Matouk Bassiouny & Hennawy’s Dispute Resolution Group has maintained a dominant position in the Egyptian market based on its successful representation of multinational clients in high value cases.

The Dispute Resolution Group’s primary goal is to effectively manage risk and resolve disputes pursuant to clients’ strategic interests – whether through amicable negotiation, litigation or arbitration.

Comprised of four partners and over 50 attorneys trained in both common and civil law jurisdictions with high standing in regional and international levels, Matouk Bassiouny & Hennawy’s Dispute Resolution Group provides clients with comprehensive dispute resolution services in both English and Arabic.

The Group has a wide experience in fields including: 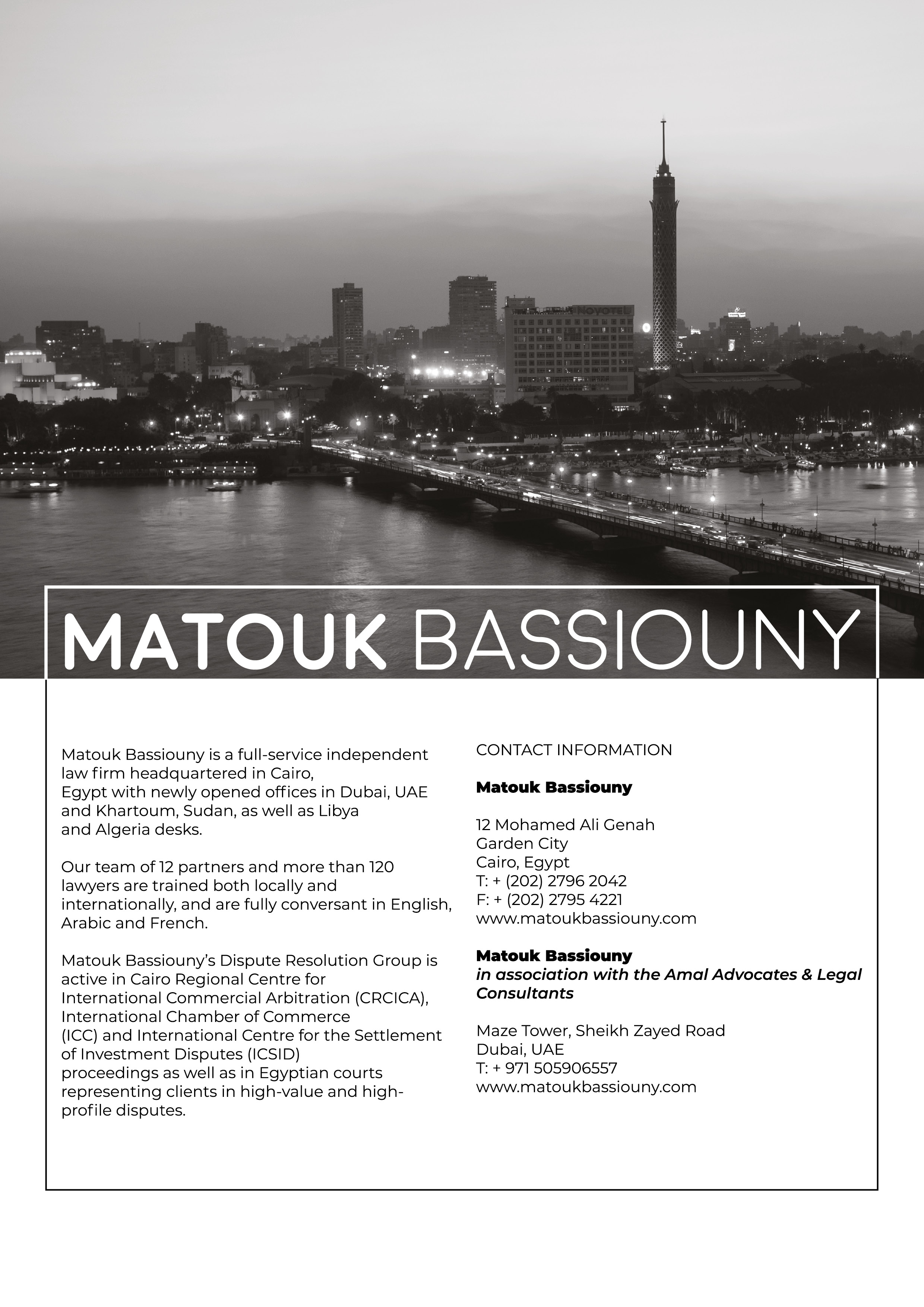