Japan’s first entrant in the GAR 100

New in 2018. Japan’s biggest law firm, Nishimura & Asahi was established in 1966 and has been involved in a number of arbitrations over the years, spanning M&A, joint ventures and construction. With Japan only recently beginning to make progress as an arbitral seat, the firm’s activities in this field haven’t been as visible as those of its counterparts in, for example, South Korea.

But the work is there. At time of writing, it has three arbitrations on its books valued in the hundreds of millions. It’s been active in disputes across Asia, taking on cases at major institutions like the ICC, SIAC and CIETAC, as well as the Japan Commercial Arbitration Association (JCAA) the Korean Commercial Arbitration Board (KCAB) and other recognised bodies in Indonesia, Vietnam and Thailand.

In 2010, it caught a lot of notice for winning a pro-New York Convention ruling in the Tokyo courts for insurance company AIU during set-aside proceedings, which was shortlisted for a GAR award.

The practice is led by Tokyo partner Hiroyuki Tezuka, who is a familiar face around the region – he sits on the SIAC Court and the KCAB International Arbitration Committee, as well as the ICC Court. He is also among the small group of Tokyo practitioners helping to set up a new hearing centre for the JCAA.

He is joined by eight other arbitration attorneys in Tokyo office, as well as Singapore partner Shintaro Uno. From July 2017, these included an English-qualified foreign attorney, Natalie Yap, whom the firm hired from Watson Farley and Williams in Singapore, and the newly promoted Chie Nakahara. The firm expects to make a new hire in early 2018.

Nishimura & Asahi is a leading Japanese law firm, covering all aspects of domestic and international business and corporate activity. We pride ourselves on being a pioneer at the forefront of creating innovative solutions for resolving disputes in Japan and elsewhere. Our achievements in large and complex disputes in respect of a wide variety of industries and practice areas is unrivaled. This has been made possible by the advantages arising from our scale, as the largest international law firm headquartered in Japan, and the comprehensive range of services we are able to offer.

With more than 30 years’ experience in the field, our international arbitration practice group, headed by Hiroyuki Tezuka, is dedicated to providing our clients with the highest quality services for dispute resolution. We have been involved in high-profile and large-scale arbitrations under various institutional rules, such as those of the ICC, SIAC, JCAA, AAA-ICDR, KCAB and VIAC, and are also experienced in ad hoc arbitrations. Our arbitration practice group has experience handling arbitrations relating to post M&A disputes, joint ventures, licenses, distributorships, franchises, construction and infrastructure projects, foreign investments and investor-state disputes, and intellectual property. We are Japan’s first and only law firm to be listed in the “GAR 100”.

With the continued expansion of our international presence and clientele, we have overseas offices in Bangkok, Beijing, Shanghai, Dubai, Hanoi, Ho Chi Minh City, Jakarta*1, New York, Singapore, Yangon and Hong Kong*2, and domestic offices in Tokyo, Nagoya, Osaka, and Fukuoka. Through our domestic and global network, we are ideally placed to provide our clients with a borderless one-stop service, from Japan to the world. 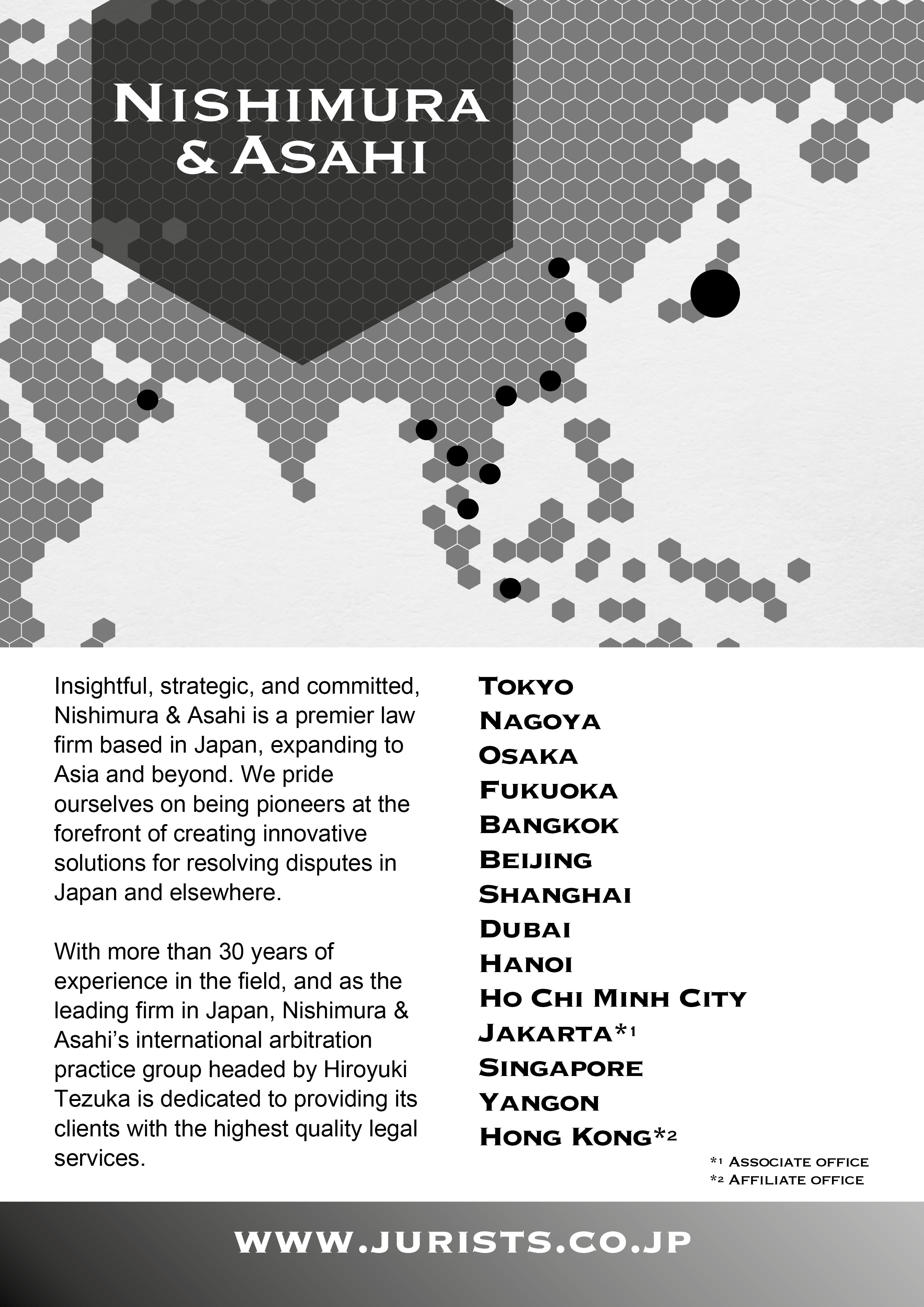