NEW ENTRY. The 2017 hire of a team from GAR 100 boutique Astigarraga Davis in Miami has catapulted Reed Smith into the ranking and given it a new global head of international arbitration, the highly respected José Astigarraga. These and further hires have signalled the firm’s ambitions for the practice, which already has a strong track record of work for Kazakhstan in investor-state disputes.

Founded in Pittsburgh in 1877, Reed Smith has made its name in energy and natural resources, life sciences, entertainment, shipping and financial services. Lawyers within some of those industry groups have practised international arbitration for a while but the firm was slow in knitting the various teams together and marketing itself as a name in this field.

Today’s practice began to take shape around 2007 when Reed Smith merged with UK firm Richards Butler, bringing on board a disputes team in London. A construction team from Pinsent Masons joined soon after. London became the anchor of the practice, with key figures emerging at that time including Gautam Bhattacharyya, who has a focus on India-related work; and Belinda Paisley, who takes the lead on the firm’s investment treaty and public international law work.

Between 2008 and 2013, the practice extended its reach with the launch of offices in Hong Kong (where it acquired Richards Butler’s local operations), Singapore, Houston and Astana – this last in response to an increasing amount of work from the Kazakh government.

Bhattacharyya, who for a time was based in Singapore, co-headed the global practice during this period, initially alongside Shai Wade (until his move to Stephenson Harwood in 2012) and then Gordon Bell (who left for Gowling WLG in 2017).

With the hire of the former Astigarraga Davis team, José Astigarraga in Miami has now assumed the mantle of global practice head, with Bhattacharyya in London serving as deputy. Under his leadership, the practice expects to see a marked increase in Latin America-related work and a shift towards representing investors as well as states in investment treaty cases.

A fluent speaker of Spanish, Astigarraga is an active figure in the international arbitration community. He is a former vice president of the LCIA and a member of the ICC commission on arbitration and ADR, and oversaw the International Bar Association task force responsible for the IBA guidelines on arbitrators’ conflicts of interest. He was also one of the US government’s appointees to a NAFTA commission aimed at promoting dispute resolution in North America.

An additional boost came in 2017 with the hire of Pinsent Masons’ former Paris arbitration practice head Peter Rosher, who specialises in construction and energy disputes and is a director of the French Arbitration Association.

The wider firm has 27 offices across the US, Europe, Asia and the Middle East. As of 2016, it also has a formal law alliance with Singaporean firm Resource Law.

The firm has a policy of not naming its clients, but they include market leaders in the energy and natural resources, construction, pharmaceuticals and shipping industries.

Kazakhstan has been using the practice for nearly two decades in ICSID and UNCITRAL matters, some worth billions of dollars. Bolivia’s state-owned telecoms company Entel and Tanzania’s national electricity company Tanesco have also relied on the firm.

At their old firm, Astigarraga’s team in Miami is known to have advised General Motors, GE Medical Systems, Citibank as well as Ukrainian oligarchs Igor Kolomoisky and Gennadiy Bogolyubov.

Reed Smith has enjoyed a string of successes for Kazakhstan. In 2013, it knocked out a pair of ICSID claims each worth over US$1 billion, which had been lodged by Dutch investment group KT Asia and US power company AES. KT Asia’s claim was tossed out at the jurisdictional stage; while AES prevailed on liability but was denied restitution or damages.

Going further back, it helped Kazakhstan win the complete dismissal of a US$200 million ICSID claim by Dutch companies Liman Caspian Oil and NCL Dutch Investment in 2010.

The former Astigarraga Davis team’s highlight reel includes enforcing an ICC award in favour of the US Federal Deposit Insurance Corporation against investment firm IIG Capital in the Florida courts; and winning some landmark US court decisions granting discovery in support of arbitral proceedings (in one case, for a NAFTA claim).

Astigarraga brought six lawyers with him to the Miami office from his old firm, including partners Cristina Cárdenas and Ed Mullins and counsel Eduardo De la Peña.

Partner Francis Bellen joined in Frankfurt from King & Wood Mallesons, a year after Natasha Tardif joined in Paris from the same firm.

Elizabeth Farrell and Antonia Panayides were promoted to the partnership in London, as was James Neudecker in San Francisco. In Houston, senior counsel Clyde Lea left the firm to set up as a full-time arbitrator, while William Russell joined as counsel, bringing experience in energy and Latin America-related work.

The firm continued its work for Kazakhstan at ICSID, helping to reduce a US$150 million claim by Turkish investor Aktau Petrol to an award of just US$22.7 million against the state. The tribunal held the state liable for the actions of court bailiffs in connection with the seizure of port investments on the Caspian Sea, but rejected allegations of judicial corruption.

On the litigation side, it’s defending Bank of New York Mellon in proceedings in a US court action brought by Canadian mining company Crystallex, which is seeking to compel the bank to hand over frozen Venezuelan government assets to satisfy a billion-dollar ICSID award.

Jeremy Seabridge of Australian developer Southern Cross says: “Reed Smith’s commitment to the process was unwavering and their legal resources were constantly on call despite international time differences.” The team in the Dubai office, led by partner Paul Taylor and associate Kristine Kalnina, consistently exceeded expectations and came in “well below budget”. The pair were “particularly impressive” in their preparation and enthusiasm.

To build on our existing strengths in arbitration, we launched an expansion of our global arbitration practice last year.  Since then, we have been joined by leading international arbitration lawyers in Paris, Singapore, Frankfurt, New York, and Miami, where we added a market-leading team for Latin American disputes.  The most recent addition to our practice has been in the United Arab Emirates, where we have been joined by a number of high-profile international arbitration lawyers with wide and long-standing experience in the Middle East.

With the addition of such recognized talent to our already-strong and multi-jurisdictional team of international arbitration lawyers, we now have one of the largest and most diverse international arbitration practices in the world, with the ability to represent clients in every significant arbitral center and seat around the globe.  As one of the world’s leading disputes firms, we also represent clients in arbitration-related proceedings in first instance and appellate courts, including stay and enforcement proceedings.

Our geographic reach is coupled with deep industry knowledge.  Many of our arbitration lawyers are embedded within industry groups, giving them practical and real-life experience of the workings of our clients’ business and industries in a wide range of sectors, including energy and natural resources, shipping and transportation, international trade and commodities, pharmaceuticals, life sciences, entertainment and media, financial services, telecoms, insurance, manufacturing, and construction. 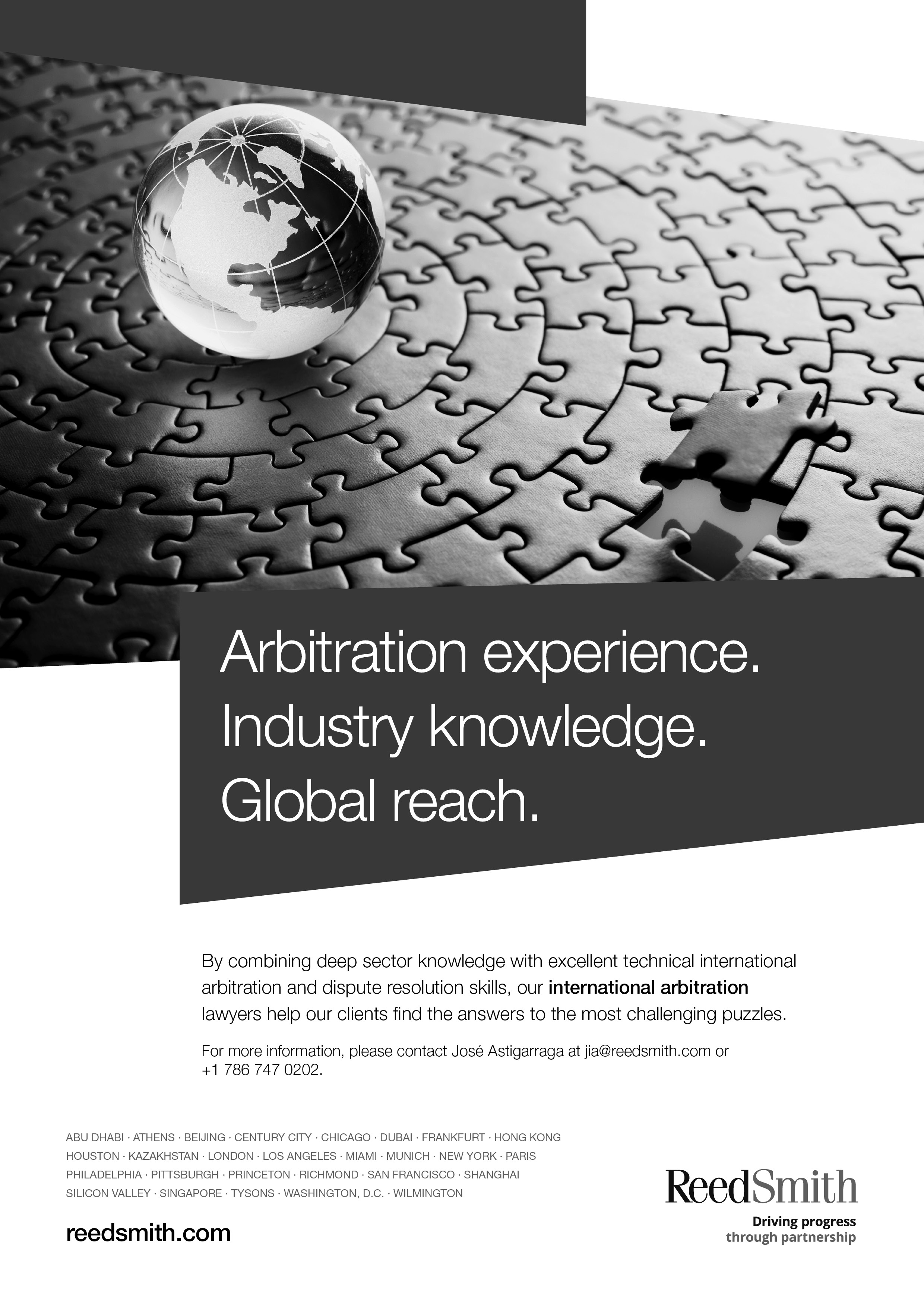