Squire Patton Boggs is the product of a 2014 merger between two US firms: Cleveland-based Squire Sanders and Patton Boggs in Washington, DC.

While most of the merged firm’s arbitration capability comes from the Squire Sanders side, Patton Boggs had successfully penetrated the Middle East over 30 years and developed a disputes practice led by Doha-based construction disputes specialist Tom Wilson and Dubai-based Alain Farhad (who joined from Freshfields).

Another name to know is Luka Misetic in New York, a US lawyer of Croatian origin who joined the merged firm in 2015 and has acted in cases before the International Criminal Tribunal for the former Yugoslavia.

The merged practice is best known for its work on behalf of states in investment disputes and buyers in gas price review arbitrations. It reckons to have concluded more than 40 gas pricing disputes in Europe or Asia with wins or settlements negotiated prior to the commencement of arbitration for clients including Gas Natural and Edison.

The firm has 44 offices spanning 21 countries. At least 90 lawyers in 15 offices are focused on dispute resolution.

For arbitration, the key US and European offices are London, Paris, Frankfurt, Prague, New York and Washington, DC. Middle East work is handled from Abu Dhabi, Dubai and Doha.

In Asia, arbitration partners Peter Chow in Hong Kong and Brendan Reilly in Perth are building a practice in Singapore as well as their respective jurisdictions. There is also a Tokyo practice headed by senior counsel and Canadian former diplomat Haig Oghigian, a recent hire from K&L Gates.

Other arbitration-literate partners are found in Budapest, Houston, Columbus, Miami and Santo Domingo.

Recent state clients include Croatia, Estonia, Ecuador, Gabon, Libya Slovakia and Saudi Arabia. It has acted for Kosovo in its first investment treaty arbitration and for the country’s telecoms operator in English set-aside proceedings.

It has also acted for New Doha International Airport and Hitachi.

Together with Dechert, Squire Patton Boggs helped Ecuador convince an ICSID annulment committee to shave US$700 million off an award in favour of Occidental Petroleum in 2015 – the largest amount ever annulled at ICSID. Ecuador paid US$980 million to satisfy the award in the following year.

For Slovakia, the firm secured the dismissal of a treaty by Dutch insurer Achmea on jurisdictional grounds and an award of costs for the client. GAR recognised the victory as one of the most important decisions of 2014.

The firm says its success in obtaining favourable awards has contributed to a series of high-value settlements in its most recent price review cases.

Three awards won by the firm were ranked among the top 20 awards in the world from 2001 to 2013 by The American Lawyer’s Arbitration Scorecard.

The firm scored another big win for Slovakia in 2017, defeating a US$1.65 billion ICSID claim brought by investors in a talc mine. The award is now the subject of annulment proceedings, while one of the claimants has promised to submit a new claim.

An UNCITRAL case brought on behalf of Croatia failed to come off, however, with a tribunal rejecting allegations that Hungarian oil company MOL had bribed Croatia’s former prime minister Ivo Sanader. Croatia later lost a challenge to the award in the Swiss courts. Squire Patton Boggs continues to defend Croatia in a parallel ICSID claim by MOL.

Venezuela’s national oil and gas company PDVSA retained the firm for a trio of sensitive ICC arbitrations worth more than US$400 million. It is also defending Libya in three investment treaty arbitrations being heard at the ICC.

Andrea Holíková from Slovakia’s ministry of finance said the firm’s “exceptional approach” and “well drafted innovative tailor-suited solutions” has led the state to instruct Squire Patton Boggs on a number of matters.

She highlighted the work of Stephen Anway, whose “broad understanding of international law and jurisprudences, mixed with unusual creativity, makes his writing bulletproof”.

Sebahedin Ramaxhiku of Kosovo Telecom was “extremely impressed with the speed and dedication” of the team, with James Barratt in London showing “professionalism” and “creative thinking”.

Squire Patton Boggs is one of the world’s strongest integrated legal practices with more than 1,500 lawyers in 44 offices across 21 countries. For more information, visit www.squirespattonboggs.com. 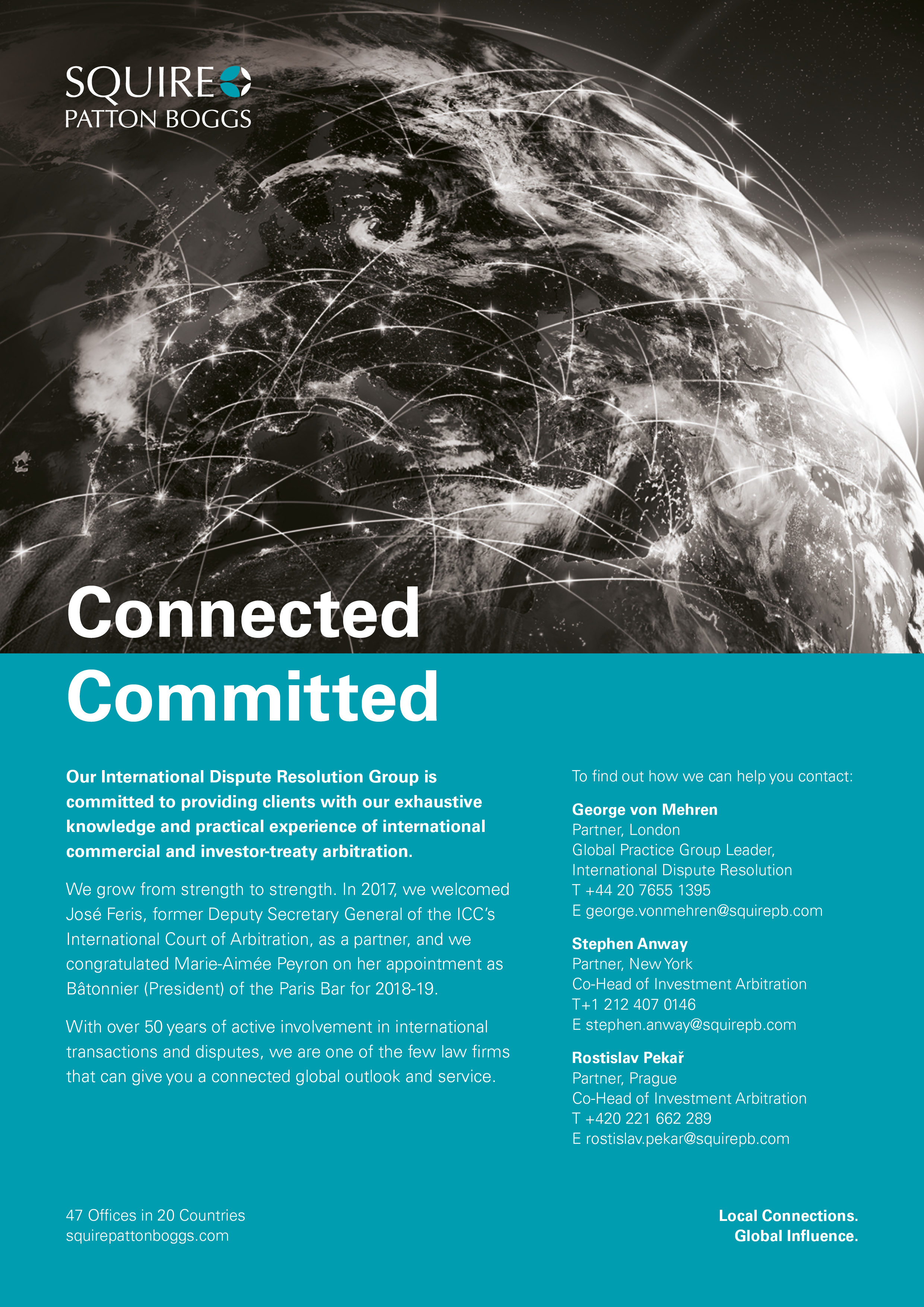