Saw an end to high-stakes cases for Gazprom and Total

Since its inception in the 1980s, Sweden’s Vinge has maintained a dispute resolution practice, even though the firm was at that time focused mainly on M&A. A decade ago it transformed into a full-service law firm with its own international arbitration team. Late partner Robert Romlöv in Gothenburg helped build up the group and was an early adviser on ICSID arbitration and counsel to Dutch investor CME in a landmark treaty case against the Czech Republic.

The practice was further shaped by Hans Bagner, one of Sweden’s better-known names in the field (he’s since moved to a smaller practice). The arbitration group poached a rival’s core practice in 2009, adding a number of new faces to the group, including the then chair of the board of the SCC Arbitration Institute, Johan Gernandt.

Gernandt and another partner left the firm in 2017 to set up their own shop. Partner James Hope continues to anchor the work, serving as head of the dispute resolution team in Stockholm (as well as a member of the board of the SCC Arbitration Institute).

Often acting as lead counsel in international cases, the team regularly finds itself arguing against major foreign practitioners, including QCs, in foreign seats. While home to established names in the arbitration world, it is keen to note that in the Swedish market, the “old guard” is beginning to step down and a new generation of young and savvy lawyers are coming to the fore.

The arbitration group works from Stockholm, Gothenburg, Helsingborg and Malmö. It also maintains a presence in Brussels.

Vinge frequently pairs up with international counsel for big-ticket energy work. Together with DLA Piper, it has been acting for Russia’s Gazprom in a set of SCC cases against Ukraine’s Naftogaz under long-term gas supply and transit agreements, reportedly worth around US$80 billion (see ‘Recent events’).

Russia is a rich source of work for the firm. It’s advised Rosneft, Acron, shipyard Baltiysky Zavod, energy companies Rosgazifikatsiya and Tyumenneftegaz as well as the Russian shareholders in the TNK-BP joint venture. It has also acted for Spanish investment funds that held a minority stake in Yukos for Swedish court proceedings against the Russian state.

A significant win for the firm came in 2017 when it helped Total subsidiary Elf Neftegaz defeat a US$22.4 billion UNCITRAL claim brought by the Russian provinces of Volgograd and Saratov. The dispute concerned an aborted oil deal agreed immediately after the collapse of the Soviet Union and gave rise to criminal proceeedings targeting two of the original arbitrators. Linklaters led the work on the case, with Vinge co-counselling with another Swedish firm, Mannheimer Swartling, as well as Paris boutique Darrois Villey and Russia’s Egorov Puginsky.

Vinge helped London-listed JKX Oil & Gas win interim relief in an SCC emergency arbitration procedure against Ukraine in 2015 – one of the first times the mechanism has been used against a state. The emergency award, requiring the state to suspend a hike in gas production royalties pending an Energy Charter Treaty arbitration, was later enforced in the Ukrainian courts.

In the Swedish courts, it managed to set aside a US$173 million award against its client Tyumenneftegaz in 2015, demonstrating that the arbitrators had exceeded their mandate.

It successfully defended Swedish Export Credit Corporation against claims of more than US$400 million brought by a large Swedish bank; and helped the same client settle an US$80 million dispute with a unit of Lehman Brothers a few weeks before hearings.

Going further back, pne of the firm’s most illustrious moments was the CME v Czech Republic case from 2003. Vinge was part of the legal team acting for the Dutch investor in local court proceedings to defend a major award under the Netherlands–Czechoslovakia BIT. The investor won one of the largest sums seen at that time at ICSID (US$270 million).

Vinge represented Russia’s Gazprom alongside DLA Piper and two British QCs in a US$71 billion gas supply dispute with Ukrainian state entity Naftogaz that saw a final award in December 2017. The tribunal granted Naftogaz a downward price adjustment on gas supplied since April 2014 but not for the three-year period before then. It also rejected a US$56 billion claim by Gazprom for breach of “take or pay” obligations.

Both sides have claimed victory, with Gazprom saying the award requires Naftogaz to pay it US$2.18 billion immediately; and Naftogaz suggesting it will save US$75 billion over the life of the contract. Gazprom is pursuing set-aside proceedings in the Swedish courts. The SCC tribunal is expected to rule soon on a US$16 billion claim by Naftogaz under a gas transit agreement.

Johan Gernandt and Finn Madsen left the firm in February 2017 to establish their own boutique.

Cecilia Möller Norsted became a partner at the start of 2018.

Helen Engebrigtsen, in-house counsel to Orkla, says she was very satisfied with Vinge’s handling of a trademark dispute with Nestlé. The team was “very skilled” and “well-prepared, with great cooperation among the team members, clients and witnesses”, she says.

One client tells GAR, “Vinge prepared written submissions which have been of the absolute highest standard and quality,” and praises the team of Jonas Eklund and Fredrik Lundblom for their “very efficient direct examinations and cross-examinations.” The client also notes that Vinge’s fees were significantly lower than counsel’s fees for the opponent. 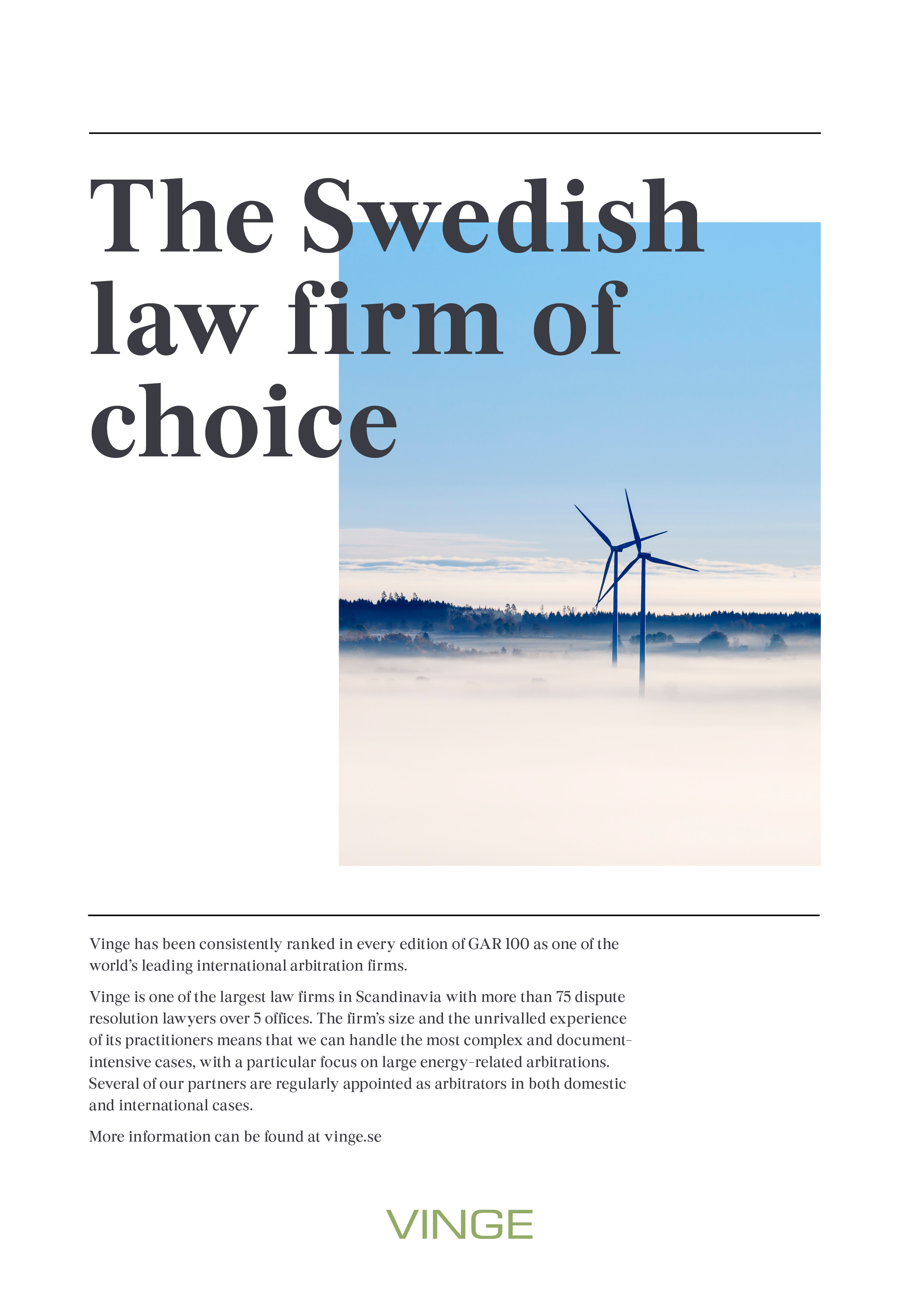