The firm’s international arbitration practice is led by Alvin Yeo SC, a respected arbitrator and counsel. Yeo is a member of the ICC Commission on Arbitration and the SIAC’s council of advisers, and is on the ICDR’s Energy Arbitrators List. Another partner to know is Koh Swee Yen, who works on some of the group’s highest-profile cases.

In addition to Singapore, WongPartnership has offices in Shanghai and Beijing. In 2014, it opened its first office in Myanmar. It has alliances with firms in Malaysia, Indonesia and the United Arab Emirates.

As for investor-state work, it’s been acting for gaming companies Sanum Investments and Lao Holdings in a billion-dollar dispute with Laos over a casino; and for South African mining investors in a dispute with Lesotho (see ‘Recent events’). Papua New Guinea is a notable state client.

Papua New Guinea retained the firm for an ICSID case and was rewarded with a complete victory in 2015 when a tribunal chaired by Gary Born ruled that the country’s investment promotion law didn’t provide a freestanding consent to arbitrate. It marked the first time a Singaporean firm had appeared as sole counsel in an ICSID case (Clifford Chance was on the other side).

WongPartnership has been part of a number of precedent-setting cases about arbitration in the Singapore courts. In 2016, it won the reinstatement of an UNCITRAL tribunal’s jurisdictional award against Laos permitting client Sanum Investments to resume a billion-dollar treaty claim. The case attracted much commentary because of its implications for some 130 Chinese investment treaties and the courts’ scope to second-guess arbitrators on questions of public international law.

The firm helped set aside the bulk of a US$100 million SIAC award concerning steel assets in the Philippines – a case that has clarified the limited scope for curial intervention in the arbitral process in Singapore.

In another case, the firm represented a Thai media company in a dispute with a BVI sports promoter concerning a Bangkok tennis tournament. The firm persuaded the Singapore courts to uphold a SIAC award embodying the parties’ settlement. The case has been credited with helping to define the scope of the public policy challenge to enforcement in Singapore.

The firm’s investment treaty arbitration practice continues to grow. It is now defending India against a claim by an investor challenging a US$2.9 billion tax assessment.

It is representing South African mining investor Josias Van Zyl in his efforts to reinstate treaty award against Lesotho that was set aside by a first-instance court in Singapore. The award held the African state liable for a denial of justice for its role in shuttering a southern African regional court. Van Zyl is also using the firm for a related US$200 million UNCITRAL claim against Lesotho concerning a mining expropriation.

Another high-profile court instruction has come from Indian brothers Malvinder and Shivinder Mohan Singh and their affiliates. They are seeking to set aside a US$550 million ICC award that held them liable for fraudulent misrepresentation when they sold a stake in Ranbaxy Laboratories to Japanese drugmaker Daiichi Sankyo.

After helping Sanum prevail in the courts against Laos, WongPartnership has been helping the gaming company in its efforts to collect on a US$270 million SIAC award against a private Lao business partner, ST Group.

The firm’s pending commercial work includes acting for an Indonesian fund in a US$1 billion share ownership dispute with a Philippines conglomerate relating to toll-road concessions; and a Singaporean multinational in an ICC arbitration with a Middle Eastern state over the construction of a waste management facility.

It is defending the KPN Group, owned by the family of Thai businessman Nop Narongdej, in a shareholder dispute relating to Thailand’s largest wind energy company. An ICC tribunal seated in Singapore has so far issued two partial awards worth US$113 million against KPN and frozen shares in the energy company.

It defended Sun Travel and Tours, a tourism company owned by Maldivian politician Ahmed Siyam Mohamed, in an ICC arbitration brought by Hilton, which ended with the firm’s client being ordered to pay US$26 million for the early termination of an agreement to manage an island resort.

Partner Suegene Ang has moved to the firm’s Myanmar office.

Jonathan Gibson, chief executive officer of Italian pipe coating company Socotherm, says he has recommended the firm to friends. “I was most impressed by the detail and amount of preparation of our team. They delved deeply into complex technical matters and quickly obtained a very good understanding.”

WongPartnership has a leading international arbitration practice with extensive expertise and experience in managing and conducting arbitrations in jurisdictions around the world. We advise and act in complex, high-value, cross-border matters across a range of industry sectors, including banking, financial, commercial, construction, energy, international sales, investment, entertainment, hospitality, infrastructure, medical, natural resources, telecommunications, transport and trade. We are able to provide international solutions, with offices in Beijing, Shanghai and Yangon, as well as in Abu Dhabi, Dubai, Jakarta, Kuala Lumpur and Manila through member firms of WPG, a regional law network. 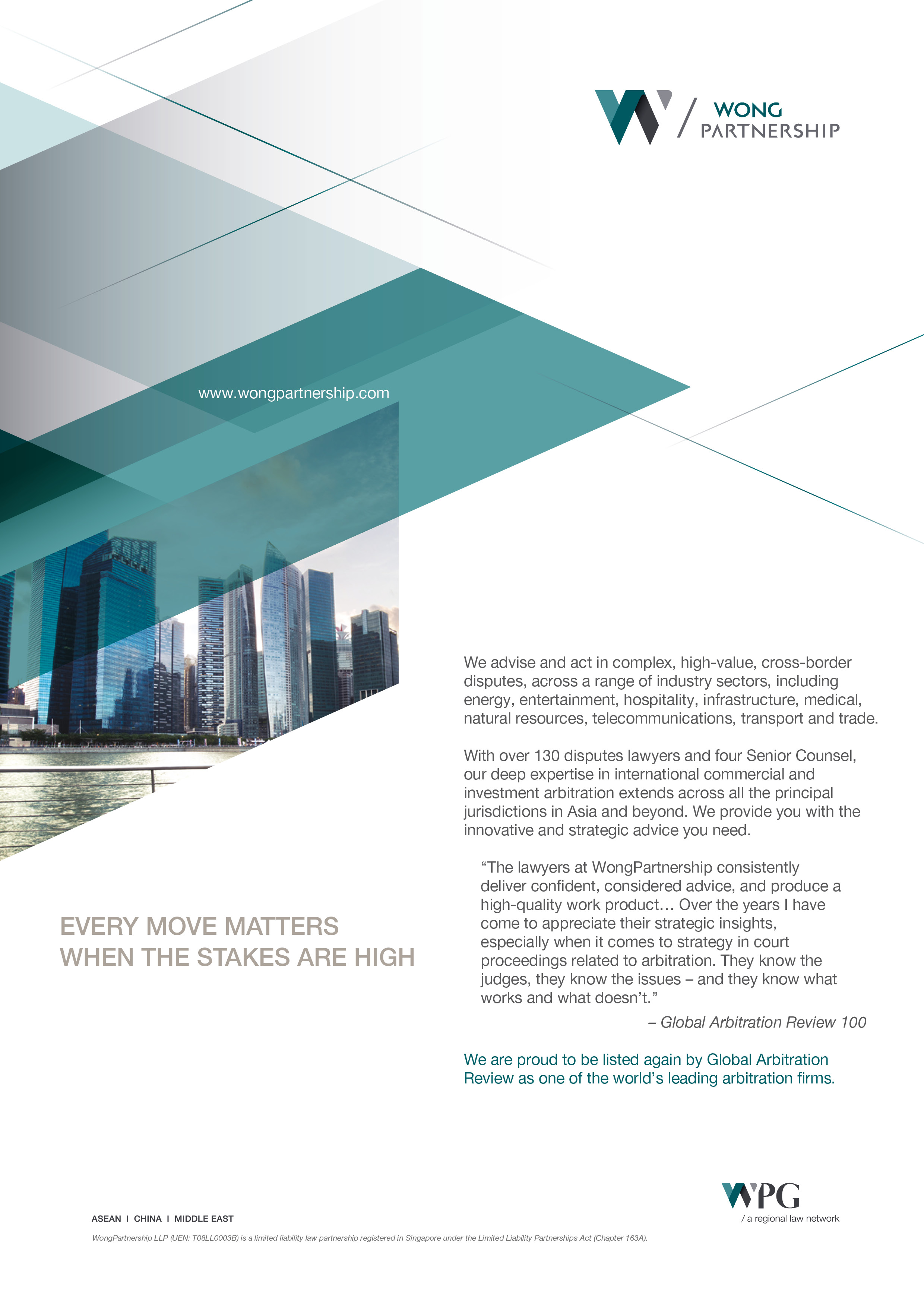