A mainland Chinese firm with a presence in Hong Kong

Founded in 1993, Fangda Partners was one of the first law firms established under mainland China’s contemporary legal system. It now boasts over 150 lawyers offering commercial law services in Beijing, Shanghai and Shenzhen, as well as a presence in Hong Kong through an association with Peter Yuen & Associates.

The firm has been advising foreign investors in China on disputes since the early days, but the international arbitration practice really came to the fore after the opening of the Beijing office in 2004 and the addition of new US-trained practitioners with deeper international experience. In 2007, the firm added former CIETAC deputy secretary general Ming Kang.

Nowadays, the firm says the dispute resolution team consists of around 40 lawyers. Besides handling CIETAC work, it frequently teams up with leading foreign firms for ad hoc and institutional arbitrations under the major rules and provides expertise on Chinese law in overseas proceedings. It is also one of the few Chinese firms to have independently and successfully represented both Chinese and foreign clients in international arbitrations in Hong Kong and Singapore.

Increasingly, clients are using it in arbitration-related court proceedings in China.

Prominent members of the practice group include Daniel Huang, the first partner at the firm to specialise in arbitration, who has handled dozens of cases about foreign investments; US-trained senior corporate lawyer Xiang Ji, who is said to be a household name in China for his skills in public debate; and veteran litigator and expert in construction arbitration Nuo Ji.

Helen Shi is an internationally experienced specialist in handling CIETAC cases (she also sits as an arbitrator for the centre), while Benjamin Miao has spent six years with a UK magic circle firm in Shanghai and Hong Kong.

The firm has offices in Beijing, Shanghai and Shenzhen. Since 2012, it has offered litigation and international arbitration capabilities in Hong Kong through a formal association with Peter Yuen & Associates – headed by a former Freshfields partner and including bilingual lawyers qualified in Hong Kong, English and Singaporean law. This has prompted speculation that the firm may aspire to open other international offices beyond China.

The firm was instructed by US energy company ConocoPhillips to settle a US$230 million environmental claim brought by the Chinese government arising from an oil spill in the Yellow Sea – by far the largest such claim in China to date. It has also co-counselled the same client in a related US lawsuit brought by Chinese fishermen.

It acted as Chinese counsel to one of the big four firms in a US Securities and Exchange Commission investigation concerning the audit of a US-listed Chinese company; and for an Asian private equity firm fighting a US$20 million claim by a former partner in relation to their separation agreement.

Fangda helped a European real estate investment fund win a US$31 million award in 2015 after a six-year dispute over a transfer of property. The same year, the firm helped a client win 90% of its claim in a leasing dispute at the Shanghai International Arbitration Centre; and achieved a favourable settlement in a dispute over a US$300 million real estate development in Beijing that did not get the approval of Chinese security services.

In 2013, the firm acted for a large Chinese state-owned construction company in a London-seated UNCITRAL arbitration with the road authority of an African state. The parties settled their dispute, which was worth over US$100 million. It also says it gained a landslide win plus costs for a Spanish client in a Hong Kong seated UNCITRAL arbitration with two Chinese entities.

Looking further back, the firm famously advised leading Chinese beverage company Wahaha in a CIETAC arbitration with French dairy company Danone, which was settled on terms that were regarded as favourable to the French company.

It also acted for a Chinese business celebrity in a US$100 million Hong Kong-seated ICC arbitration against an international mobile service network – achieving a settlement in favour of the client.

In 2010, the firm was engaged by a Chinese airline in a contractual dispute with a Canadian pilot academy under ICC rules and before a New Zealand arbitrator. English was the arbitration language, meaning that until Fangda’s engagement the Chinese airline had been disadvantaged. With the firm on board, the client won (Fangda lawyers provided four rounds of written submissions and cross-examined witnesses in English).

It obtained a favourable settlement for a global private equity client in relation to an ICC claim for fraudulent misrepresentation against a Bermuda company holding two wholly foreign-owned enterprises in China.

Its performances in the Chinese courts include enforcing the first ever Hong Kong-made ICC award for a European client in Shanghai in 2009, soon after the ICC Court opened its Asia office.

Fangda successfully defended a Chinese client in a sale of goods dispute at SHIAC, where the tribunal rejected the claimant’s case entirely and partially upheld the client’s counterclaim. It won a good settlement for an international hotel management company after a two-year arbitration worth US$60 million.

At CIETAC, a Hong Kong real estate client won the entirety of its US$30 million-plus claim against a Chinese industrial company. In another case, the firm defeated a US$90 million claim against a German manufacturing client.

Pending work includes acting for a Korean company in a rare China-seated SIAC arbitration over liquid and gaseous products. It is also defending 14 parties in a US$150 million HKIAC arbitration with a pension fund involving claims of misrepresentation.

Founded in 1993, Fangda Partners is one of the longest-established law firms under mainland China’s contemporary legal system. We now have more than 490 lawyers, including 94 partners, offering commercial law services in Beijing, Guangzhou, Hong Kong, Shanghai and Shenzhen. We are widely regarded as a leading Chinese commercial law firm, ranked Band 1 in Chambers & Partners Asia Pacific 2017  for Dispute Resolution, Corporate/M&A and other areas, as well as winning National Law Firm of the Year - China 2016 from Asialaw Asia-Pacific Dispute Resolution Awards and the Innovative Lawyers 2016 Asia-Pacific from Financial Times.

Lawyers at the firm have been advising clients in China on dispute resolution since the early days, but the international arbitration practice really came to the fore after the opening of the Beijing office in 2004 and the addition of new US-trained practitioners with deeper international experience. In 2007, the firm added former CIETAC deputy secretary general Ming KANG.

Besides handling CIETAC work, the firm frequently team up with leading foreign firms for ad hoc and institutional arbitrations under the major rules and provide expertise on Chinese law in overseas proceedings. Fangda Partners is also one of the few Chinese firms to have independently and successfully represented both Chinese and foreign clients in international arbitrations in Hong Kong and Singapore.

Through its formal association with Peter Yuen & Associates, Fangda Partners has since July 2012 had Hong Kong arbitration lawyers, who are part of the Fangda Greater China Dispute Resolution team. In the city, the dispute resolution team has eight other Hong Kong/English-law qualified lawyers, one PRC-law qualified, and one Australian-law qualified. The DR team has litigation and arbitration capability covering all four of our offices.

The firm’s DR practice is best known for:

More detail about Fangda can be found on the website (www.fangdalaw.com), including biographies of our lawyers. 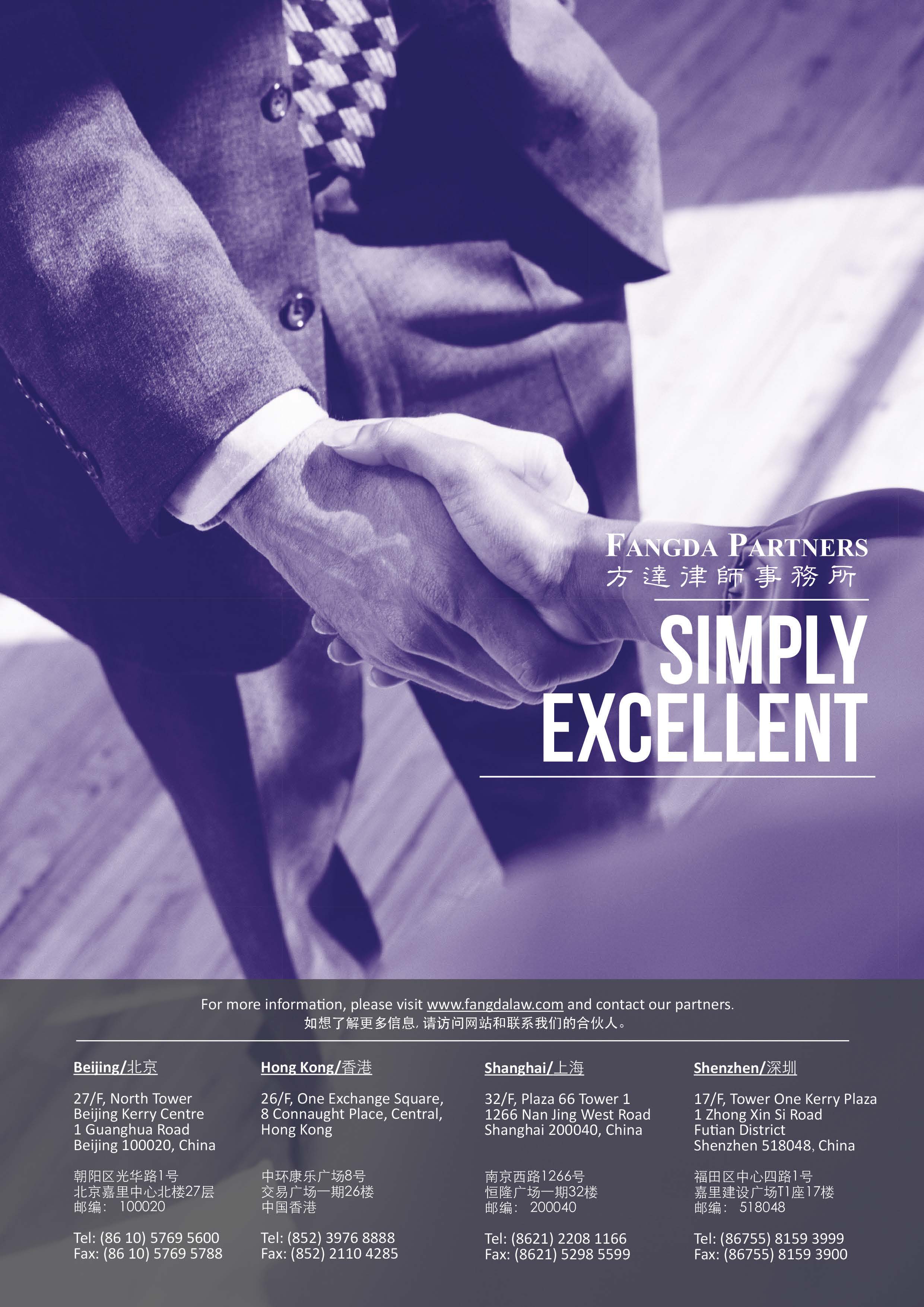