Based in New York, this boutique was born in 2009 when Peter Chaffetz, global head of litigation at Clifford Chance, and David Lindsey, co-head of that firm’s Americas international arbitration group, decided to break away. The pair had grown tired of the conflicts of interest and fixed cost structures of a full-service international firm, they explained. Their boutique won “Small Firm of the Year” at the 2011 GAR Awards.

Today, Lindsey and partner James Hosking spearhead the international arbitration work, while Chaffetz and others focus more on insurance, reinsurance and securities disputes. Both Lindsey and Hosking have featured in GAR’s “45 under 45” (Lindsey in 2006 and Hosking in 2011).

A series of promotions and lateral hires has seen the partnership rapidly expand in the past few years. Other partners to know are Swiss-US national Andreas Frischknecht, who has experience at the ICC, SIAC and the Netherlands Arbitration Institute; and Yasmine Lahlou, who has a Franco–Moroccan background and is fluent in French, Italian and Arabic. Spanish partner Anibal Sabater joined the firm in 2015 from Norton Rose Fulbright. He brings experience in investment and commercial cases and has also featured in the “45 under 45”.

It has acted for governments including Iran and Liberia as well the Nigerian National Petroleum Corporation.

But most of the firm’s clients come from the private sector, including Houston-based Enron spin-off Ashmore Energy International (AEI), insurers AIG and Tokio Marine HHC, Brazil’s Vale, South Korea’s Samwhan, the Miss Universe Organisation and Canadian software maker Open Text Corp. Turkey’s Çukurova group used the firm, along with Swiss co-counsel in a billion-dollar dispute with TeliaSonera over the sale of a stake in Turkish mobile operator Turkcell.

Much of the firm’s work is focused on Latin America, with new instructions involving clients or projects in Bolivia, Brazil, Colombia, Chile and Guatemala – mostly relating to oil and gas, power and infrastructure, construction and project finance. In one big matter, it’s advised one of the world’s largest mining companies in a dispute with a leading investment bank over the sale of assets in the region.

Chaffetz Lindsey is also a useful referral source for US and non-US firms alike, as well as a decent option as co-counsel when, as the firm puts it, “You want international arbitration experts but don’t want to engage a big firm that will dominate the matter.” The firm says it often finds itself taking on active cases after clients become dissatisfied with the service or advice of larger firms, and seek a “second opinion”.

One of the firm’s most striking results to date was helping AEI subsidiary Jaguar Energy prevail in a billion-dollar ICC dispute with Chinese contractor China Machine New Energy over the construction of a coal-fired power plant in Guatemala. In a November 2015 award, Chaffetz Lindsey secured its client US$129 million in damages along with US$20 million in costs, also knocking out a counterclaim of around US$800 million. The dispute had hearings in London, Singapore, Toronto, Hong Kong and Dublin, with some five law firms stepping in at various points to represent the respondent. Jaguar’s award is now the subject of set-aside proceedings in Singapore.

Chaffetz Lindsey is one of the few firms that can boast of having won a case against the US State Department. In 2014, the firm achieved a rare win for Iran in a case before the Iran-US Claims Tribunal in The Hague. The US government was ordered to pay damages for failing to terminate litigation initiated by US nationals against Iran in the US courts following the Iranian revolution of 1979.

The sums involved aren’t huge (Iran won US$842,000 plus interest) but it represented an important symbolic victory for the Middle Eastern state. The US government fielded 17 lawyers at the hearing, with the advocacy conducted by Harold Koh, chief legal adviser during Obama’s first term as president – a measure of how seriously the United States took the case.

As co-counsel with Korean firm Yulchon, Chaffetz Lindsey helped Samwhan Corporation prevail in a dispute with US company over a roadbuilding project in Afghanistan. An ICDR panel found the other side liable for fraud and breach of good faith in 2014, an award that was upheld in the courts of New Jersey.

Going further back, one of Chaffetz Lindsey’s European clients won an award worth US$130 million at the Netherlands Arbitration Institute. Impressively, the firm was brought in late to the dispute, which was over a licensing agreement. A multinational was on the other side.

Partner Jennifer Permesly, who had been with the firm for five years and played an important role in the Latin America practice, left to join Skadden Arps Slate Meagher & Flom as counsel.

In 2016, the firm helped Liberia settle a US$750 million ICSID claim lodged by a Canadian mining company, following negotiations that had been stalled by an outbreak of the deadly ebola virus in the west African country.

The firm also won an ICC case for a large Brazilian engineering company against an oil major over the construction of a vessel.

A new instruction came from Spanish tuna producer Albacora in a US$160 million investment treaty claim against Ecuador concerning a tax imposed in a free trade zone.

The firm continues to act for the Nigerian National Petroleum Corporation in its efforts to resist enforcement of an US$2.8 billion award in favour of ExxonMobil and Shell subsidiaries in the US courts.

New York dispute resolution boutique Chaffetz Lindsey LLP has provided top-tier litigation and arbitration advice from a smaller, more economical and flexible platform since its founding in May 2009. The firm stands apart from others because of the reputation and track record of its lawyers, its flexibility on fees, and freedom from conflicts. Having previously worked together for ten years at Clifford Chance, the founding partners have an unusually strong international practice. Chaffetz Lindsey is highly ranked by all the leading industry guides. In 2011, Global Arbitration Review named it Small Firm of the Year, and in 2014, the firm received the Chambers USA Client Service Award for International Arbitration.

Led by co-founders David Lindsey and James Hosking, Chaffetz Lindsey’s international arbitration team has handled cases in all the world’s major arbitration fora, involving disputes arising out of infrastructure projects, engineering/construction claims, oil and gas ventures, mining and natural resources projects, pharmaceutical licensing, M&A, joint ventures, environmental contamination, business torts, complex commercial contracts, and investment treaty claims for and against states. These proceedings have been governed by the rules of the ICC, ICDR, AAA, SIAC, SCC, LCIA, ICSID and UNCITRAL. While many of its arbitrations are seated in the US, the firm’s current caseload involves Asia, Europe, Latin America, and the Middle East. The firm regularly works together with leading firms in those jurisdictions and can also draw on its own multilingual staff, many of whom have practiced or trained overseas.

The strength of the firm’s 30-lawyer team lies in the depth of talent at the partner, counsel and associate level, many of whom regularly speak, write and present on developments in international arbitration, and who hold leadership roles in various industry organizations. David contributes to the leading text on international arbitration in New York and James co-authored the first commentary on the ICDR Rules and was involvedin drafting the revised 2014 ICDR Rules. A frequent writer and speaker in his field, Aníbal Sabater is NYIAC’s Program Committee Chair and a member of the Executive Council of the International Law Association. Partner Yasmine Lahlou is the US Regional Coordinator of the ICC Young Arbitrator Forum and Co-Chair of the American Bar Association’s International Litigation Committee. Several members of the team sit regularly as arbitrators.

Chaffetz Lindsey also has an active US state and federal court litigation practice. The firm’s experience covers all aspects of general commercial litigation, with a particular focus on claims involving finance/securities, re/insurance, cross-border disputes and sovereign immunity issues. The team includes lawyers who are fluent in eight languages and with experience practicing in Europe and Latin America. With its strong network of contacts around the world, the firm values opportunities to co-counsel with lawyers from other jurisdictions. 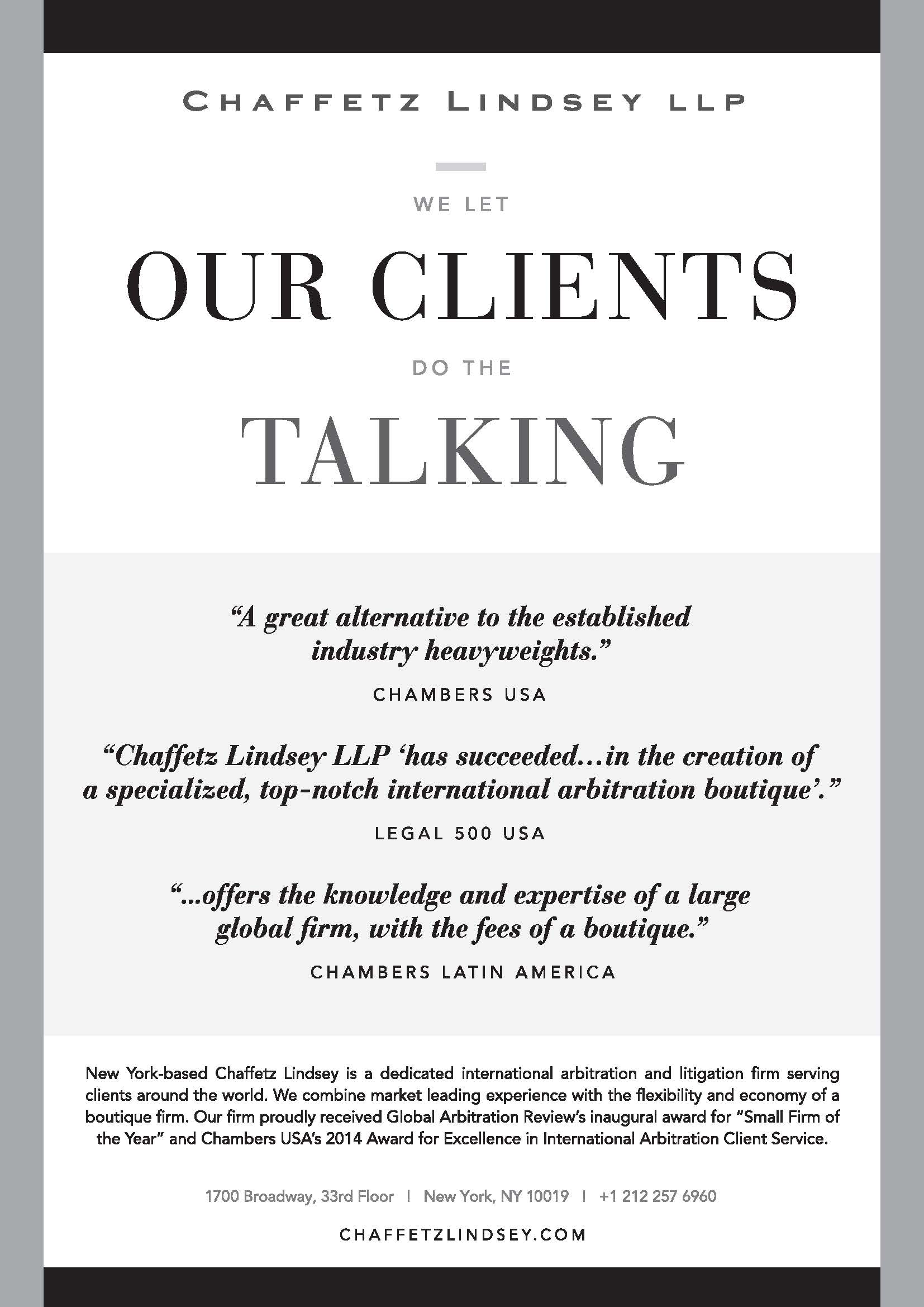