The Italian firm has expanded to Egypt and Ethiopia

This Italian firm is the product of a 1999 merger between three firms from Milan, Genoa and Brussels. Since then, it has grown from 90 to over 300 lawyers while retaining a reputation for strength in EU and international law. In arbitration terms, it is one of the few local players that can boast of ICSID experience.

The arbitration practice is led by Antonio Crivellaro, of counsel at the firm, who also sits as an arbitrator. A former co-head of the practice, Luca Radicati di Brozolo, left the firm in 2013 to establish his own boutique, ArbLit. The ICC Court’s secretary general, Andrea Carlevaris, is also a former member of the practice.

The arbitration group is concentrated in Milan, with one partner in Rome. The wider firm has outposts in London and Brussels. It is also part of a “best friends” group with five other GAR 100 firms: Bredin Prat in France; De Brauw Blackstone Westbroek in the Netherlands; Hengeler Mueller in Germany; Slaughter and May in the UK; and Uría Menéndez in Spain.

In 2016 the firm opened new offices in Cairo and Addis Ababa, as part of its development plans for Africa-related work. It has established links with two local firms: Kosheri Rashed & Riad in Egypt, and Teshome Gabre-Mariam Bokan in Ethiopia. The Cairo firm is the more significant in arbitration terms, being the home of celebrated Egyptian arbitrator Ahmed Sadek El-Kosheri.

Construction clients feature prominently. It’s acting for a European consortium including Spain’s Sacyr, Italy’s Salini Impregilo and Belgium’s Jan de Nul in a US$1.8 billion dispute with the Panama Canal Authority that is playing out in dispute adjudication board proceedings, various ICC arbitrations in Miami and potentially even an ICSID claim.

It has acted for Saipem (a unit of Italian energy group Eni), Tecnimont, Ericsson and Enel on a number of matters.

Increasingly the firm is to be found acting on energy disputes. Eni used it in a high-value gas pricing arbitration against Edison. It’s also been involved in two cases arising from oil and gas projects in Romania and Poland.

The firm also handles post-M&A and joint venture disputes – with clients in that category including Italian industrial group CIR and BNP Paribas.

One of the firm’s most famous victories was a US$6 million ICSID award on behalf of Saipem in a case against Bangladesh in 2009. It was the first time an investment treaty tribunal had found a state liable for the acts of its judiciary.

The firm also acted for the claimant in the Salini v Morocco case at ICSID, which marked the first time a concession agreement was found to qualify as an investment. The case also ushered in the famous “Salini test”, now widely used by tribunals to determine whether an investment exists.

In the construction sector, the firm helped Italy’s Fisia Italimpianti win more than US$150 million in a series of disputes concerning desalination plants in the Middle East.

The firm also represented Tecnimont in a long-running dispute with Greek contractors over a chemical plant in Thessaloniki. It won an award on liability for its client but the Reims Court of Appeal overturned it because of doubts about an arbitrator’s independence – a decision that was quashed by the French Supreme Court. The Paris Court of Appeal upheld the award in 2016.

It helped CIR in a post-M&A dispute with a telecoms multinational. A tribunal rejected the other side’s claims and awarded the firm’s client US$500 million. Another case saw BonelliErede act for BNP Paribas Personal Finance in a billion-dollar dispute over control of a major Italian consumer credit bank; the case swiftly settled after an award that was largely favourable to the client.

BonelliErede continues to act alongside White & Case and others in a series of disputes related to the expansion of the Panama Canal. After two further ICC claims were filed in January 2017, the amount in dispute now totals US$5.7 billion.

It is also working alongside Malaysian co-counsel for an Italian construction company in an €85 million dispute against a leading Malaysian steel manufacturer.

The firm continues to advise a leading international chemicals group in an ICC claim concerning the breach of environmental representations.

Among other arbitrator work, Crivellaro was appointed by Austria’s Strabag to sit on an ICSID panel that will decide its claims against Libya. Paolo Daino was appointed to chair an ICC case relating to the sale of plastics.

Denis Lohest, vice president of business development for French company Energie (formerly GDF Suez), says that he was impressed by the firm’s “sharp” defence. He describes partner Alberto Saravalle, as a “masterchef lawyer” and praises Crivellaro as a “professional and acute” practitioner.

Luigi Patanè, former CEO of Italian construction company Consta, describes the firm as “excellent”, adding that it is easier to negotiate flexible fee arrangements with firms of Bonelli’s size than with the larger international firms.

Another Italian construction group that has used the firm says it is distinguished by its “vast experience and deep knowledge” of the ”open and hidden mechanisms” of international arbitration.

BonelliErede offers a full range of commercial legal services, combining business acumen with academic excellence. BonelliErede is not only a leading law firm in Italy but also a true international player. An essential part of its international strategy is to forge relationships with a wide number of other distinguished independent law firms in Europe and worldwide.

Thanks to its multi-practice focus teams, BonelliErede is able to offer a comprehensive, 360-degree assistance to clients, presenting itself as a truly full-service firm. 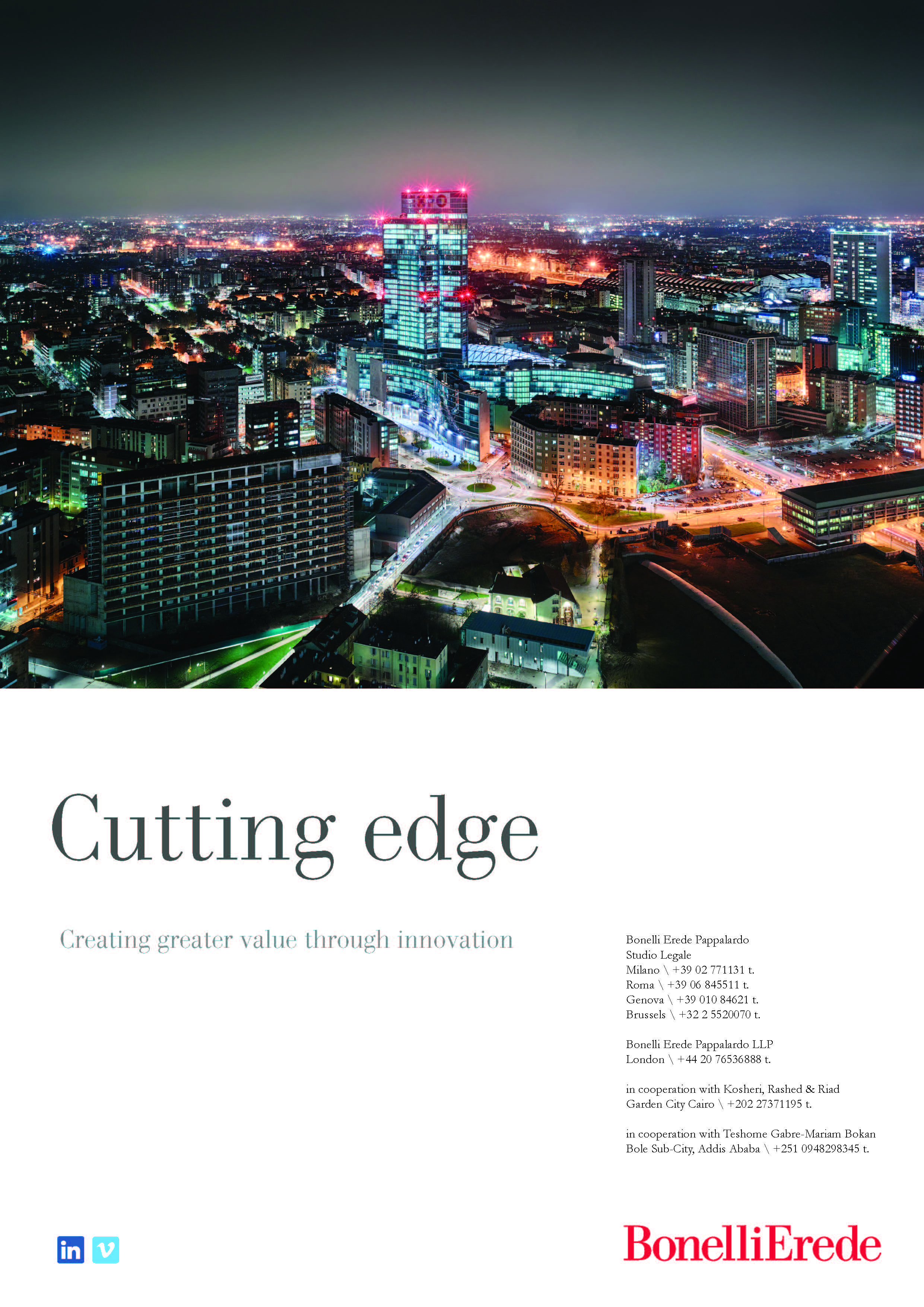