It is rare for an international firm to earn the largest part of its revenue from court cases, but Kirkland & Ellis does just that, helped by some huge instructions that include defending BP in the multi-district litigation over the Deepwater Horizon oil spill. The size of the firm’s litigation practice has tended to overshadow its name for international arbitration – but in contrast to other US litigation powerhouses, Kirkland & Ellis does have a serious international arbitration team, working mainly from London.

The firm started to build up that capability in 2005 with the hire of partners Christopher Colbridge and Rajinder Bassi from Shearman & Sterling, where Colbridge was head of the London arbitration group. Both their careers began at Clifford Chance. Under their stewardship, the group has grown through a mix of internal promotions and strategic hires. The group is now led by Colbridge in London.

In 2013, a US publication found that the firm was acting in two of the top 10 commercial arbitrations in the world by value, including the second-largest: a US$48 billion LCIA case between shareholders in Russian aluminium producer Rusal (now thought to have been settled).

Colbridge led a team that won a multimillion-dollar award for the UK’s ICS Inspection and Control Services in an ICC claim against Kenya. The win was backed up by a victory at the enforcement stage in the English High Court, including a freezing order on Kenyan assets that secured a full settlement of the claims. ICS’s parent company, Agility, has retained the firm in several other matters, including AAA proceedings against military contractor Dyncorp that saw an award in the client’s favour.

Bassi managed to help a client knock out 95% of a US$250 million UNCITRAL claim (winning most of her costs too). Relations between the two sides remained sufficiently amicable for them to go on doing business afterwards.

The firm has also achieved a number of favourable settlements, including for the Monier Group in two ICC arbitrations with the Lafarge Group, seated in Paris and Frankfurt. Another was for the UN Relief Works Agency for Palestine Refugees in the Near East (UNRWA) in a dispute over a delayed infrastructure project in the Gaza Strip.

In 2014, the firm oversaw an amicable settlement to the US$48 billion consolidated LCIA proceedings between Rusal’s shareholders. Bassi and Ulrich Payne (who has since left the firm) acted as counsel to Rusal’s controlling shareholder, Jersey holding company En+ Group, which was a respondent in the case.

In 2016, the firm welcomed Javier Rubinstein, former global general counsel of PricewaterhouseCoopers, to its New York and Chicago offices. The firm also hired Lauren Friedman and Lucila Hemmingsen as partners in New York.

The firm acted for Agility in an ICSID claim against Pakistan that came to an abrupt end in 2015. The US$650 million claim, which concerned a port logistics software contract, cleared the jurisdictional stage but Agility withdrew its claims just before the start of merits hearings. The client was later ordered to pay Pakistan more than US$6 million in costs.

Meanwhile the firm continues to act for Agility subsidiary ICS in a resubmitted investment treaty claim against Argentina concerning a contract for customs inspection services – which was filed three years after the client’s original US$25 million claim was dismissed for failure to honour a local litigation requirement in the treaty.

The firm reports that its Asian disputes practice has also been active with instructions to act in arbitrations involving mainland Chinese and Singaporean parties.

Oded Friedmann, legal counsel at shopping centre operator Atrium, says Kirkland provides “detail-oriented” advice while always keeping the big picture in mind. “We needed legal advisers with proven international experience in a number of fields, which we found at Kirkland.”

Naguib Sawiris, executive chairman of Egyptian telecoms company Orascom TMT, highlights the “commercial sense” of the lead partners who have helped him and his company in several matters. He says Bassi and Colbridge were “more in command” than other lawyers he has encountered.

Kirkland & Ellis has a dedicated international arbitration group within the Firm’s world-renowned litigation practice. Ranked by BTI Consulting as one of the “Fearsome Foursome,” Kirkland litigation attorneys have been described as “most likely to strike fear in opposing counsel because of their tenacity, ability to assemble winning legal teams and skill at anticipating opponents’ strategy.”

The international arbitration group has handled some of the highest-stakes arbitrations to date. The group is comprised of arbitration-focused attorneys qualified in a multitude of common and civil law systems, fluent in numerous languages, and based in Chicago, Hong Kong, London, Los Angeles, New York, Shanghai and Washington, D.C. The group is consistently listed among the best arbitration firms in Chambers UK and The Legal 500.

The group has extensive experience in international commercial and investor-state arbitrations across all key sectors of the global economy, including energy, infrastructure, manufacturing, defense, telecom, technology and natural resources. The group has successfully handled arbitrations under the auspices of all the leading international arbitral institutions, including the ICC, LCIA, SIAC, HKIAC, SCC, CAS, and ICDR. Kirkland also represents clients in ad hoc commercial and investment arbitrations, including arbitrations conducted pursuant to the UNCITRAL rules and under the auspices of the ICSID rules.

The group has experience in all aspects of international arbitration, from drafting effective dispute resolution clauses, crafting risk mitigation strategies for companies investing overseas, handling complex bet-the-company arbitrations, to enforcing and executing arbitral awards in courts around the world as well as dealing with any related court proceedings. 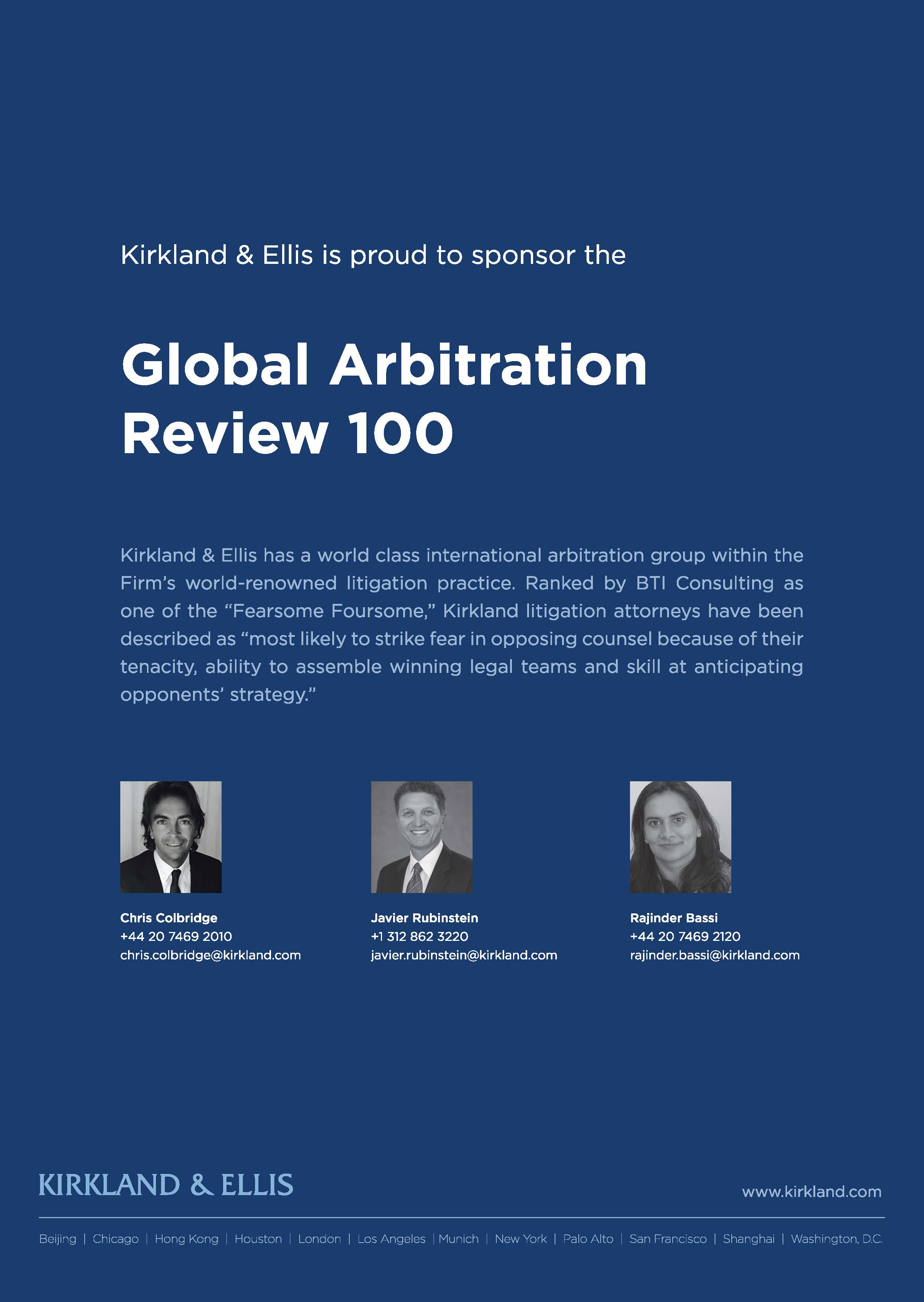