* Excludes cases at maritime and cases at mainland Chinese institutions

Dentons was the product of a 2013 merger between UK–US firm SNR Denton, Canada’s Fraser Milner Casgrain and Paris-based Salans. It merged with Dacheng Law Offices in mainland China in 2015 and agreed tie-ups with Rodyk & Davidson in Singapore and Australian firm Gadens a year later.

Of the different merger partners, Salans and Rodyk & Davidson enjoyed the strongest reputation in international arbitration, both having been listed in the GAR 100 for several years. However, other merger partners bring some experience in this field, partly thanks to their transactional work for clients in oil and gas and financial services.

Salans was founded in Paris in 1978 by US and French lawyers, and gained a name in the late 1980s for its trade work across the Iron Curtain. The firm handled some of the earliest disputes arising from Western investment in the Russia and CIS region, and East–West trade has continued to account for around half of its arbitration caseload, with much of the rest coming from Greater China, Africa and North America.

The legacy Salans practice (now the Europe arm of Dentons) is led from Paris by Jean-Christophe Honlet, with Barton Legum heading up the busy investment arbitration group. Legum joined in 2009 from Debevoise, having formerly headed the US Department of State’s NAFTA claims division.

Rodyk’s team also includes maritime specialist Lawrence Teh, who co-chairs the IBA’s Asia-Pacific arbitration group and the Asia-Pacific Regional Forum; and Lok Vi Ming SC, a former president of the Singapore Law Society who sits on the board of the Singapore International Mediation Centre.

Paris and London were the centre of the Salans arbitration practice and remain at the heart of the Dentons group but recent hires and other mergers have made Moscow, New York and Singapore increasingly important hubs.

Dentons entered Latin America for the first time in 2016 through tie-ups with Colombian and Mexican firms – adding arbitration practitioner Alberto Zuleta in Bogotá.

The wider firm has 136 offices in 57 countries. It even has offices in Cairo and Casablanca, and associate offices or alliance firms throughout Africa, which may explain its large amount of Africa-related gas price review work.

On the commercial side, it has acted for Gazprom, Engie, E Energija, Bouygues, Nakheel, Omantel, Total, Deutsche Bank and Starwood Hotels.

Some of the firm’s most visible recent successes have been for Gazprom in a long-running gas pricing dispute with Lithuania. In 2016, it persuaded an SCC tribunal to throw out a US$1.9 billion claim by the Lithuanian energy ministry that alleged Gazprom had “unfairly” raised its prices.

That was after Dentons obtained an injunction from another SCC tribunal that restrained the ministry from litigating its claims in the Lithuanian courts. That part of the dispute went all the way up to the European Court of Justice, which affirmed in 2015 that anti-suit injunctions issued by arbitrators do not violate EU law. The Lithuanian Supreme Court later enforced the SCC award. (The ECJ decision earned a GAR Award for most important arbitration decision of the year.)

Though it didn’t appear as counsel of record in the case, Dentons played a behind-the-scenes role advising Australia in a multibillion-dollar treaty claim brought by Philip Morris over legislation mandating plain packaging of cigarettes. An UNCITRAL panel threw the case out in 2015, holding that a corporate restructuring to invoke treaty protection amounted to an abuse of process.

The team has had success on both sides of the ledger at ICSID. In 2008, Salans won a US$125 million award for a pair of Turkish telecoms clients – Rumeli Telekom and Telsim – in an ICSID claim against Kazakhstan. In another case, it helped Kyrgyzstan settle a claim brought by Oxus Gold without any payment by the state or its instrumentalities.

The group also helped oil refinery owner Rompetrol win a landmark ruling against Romania that the conduct of a criminal investigation of its executives amounted to a treaty breach – though it didn’t succeed on its damages claim.

In 2009, Salans helped Vivendi claw back lost ground in a battle over ownership rights in a Polish telecoms firm, winning a €1.9 billion award in an LCIA arbitration, followed by settlement in 2011, which saw Vivendi collect over €1 billion. It won its client US$2.3 billion in another LCIA arbitration, but against a by-then bankrupt Polish entity. The result, however, paved the way for Vivendi to receive a billion-dollar payment that spared its blushes somewhat.

The tie-up with Rodyk & Davidson brought a team of 12 disputes partners into the fold in Singapore, including Philip Jeyaretnam SC, Lawrence Teh and Herman Jeremiah.

In New York, fluent Arabic speaker Meriam Al-Rashid joined as a partner from Pinsent Masons, bringing with her an active ICSID case against Egypt; while partner David Kiefer left for King & Spalding.

There were partner promotions for Jonathan Jemison in New York, Rachel Howie in Calgary, Michał Jochemczak in Warsaw and Haleem Mohammed in Muscat.

Besides the win for Gazprom already mentioned, Dentons achieved a major success for the Chinese government, securing the early dismissal of an ICSID claim by a South Korean investor in February 2017. It was the second-ever case China has faced at ICSID and the first to reach an award. (Chinese GAR 100 firm Zhong Lun was co-counsel to the state.)

In another ICSID case, Dentons won a couple of rulings for Canada’s Niko Resources in a long-running dispute with two Bangladeshi state entities – including an order requiring immediate payment of US$35 million for gas deliveries. The tribunal has still to rule on recently revived corruption allegations against Niko as well as a dispute over liability for blowouts at a gas field.

The firm won US$22 million for US aviation client GA Telesis in an LCIA claim against an insolvent Russian airline that failed to appear for the arbitration. The case was resolved by a sole arbitrator within three months of the claim being filed.

In the French courts, Dentons helped to fend off an attempt by a former majority shareholder in Yukos to attach land near the Eiffel Tower where Russia has built a cathedral. Representing Bouygues, the French contractor working on the site, the firm helped to obtain a ruling confirming that the Kremlin-owned land benefits from state immunity.

Dentons represented French port operator Getma in the US courts, where it failed to persuade a judge to enforce a US$38 million award against Guinea that had been set aside by a West African court because of the arbitrators’ fees.

Chris Outhwaite, director of Customs and Tax Consultancy, used Dentons in a multimillion-dollar ICC claim over a breach of contract by a foreign government. Outhwaite says he received “positive support” throughout the proceedings, and “advice couched in language that was easily understood by non-legal minds”.

He singles out Jean-Christophe Honlet and Augustin Barrier for “demonstrating the highest level of professionalism”.

Ania Brzezinski, vice president for legal services at US paper manufacturer Domtar, calls Dentons “a full-service firm with seasoned lawyers that have a practical business approach. They don’t needlessly drive up fees and are incredibly responsive”. Brzezinski says her company’s claim settled ahead of arbitration, an outcome Dentons was “instrumental” in achieving.

Another client praises the firm’s “dedication to the task and their common-sense attitude”, which is said to provide excellent value for money. 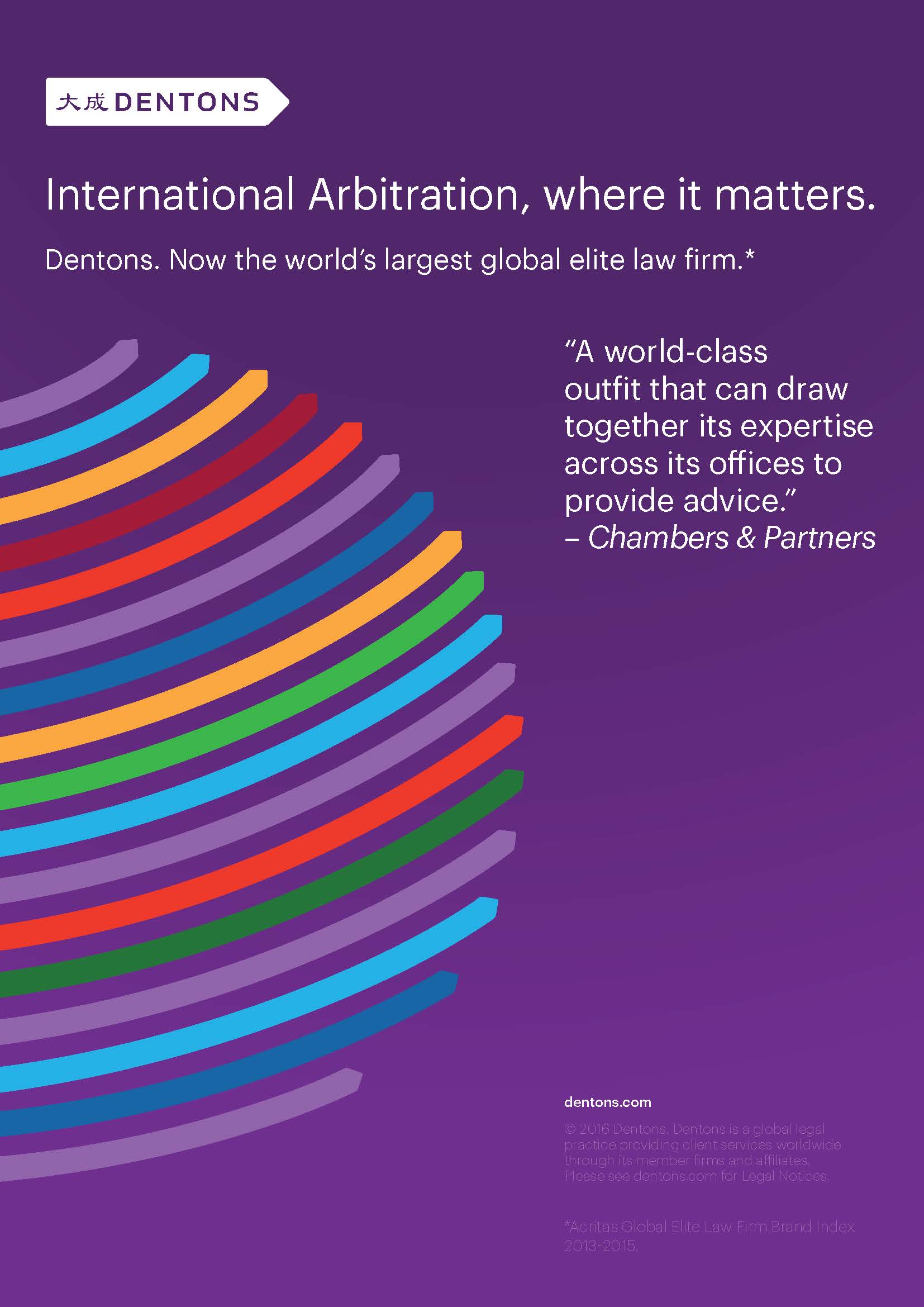