A rare example of a Portuguese firm handling investor-state disputes

PLMJ was founded in the late 1960s and now reckons to be Portugal’s largest law firm. It took on its first arbitration in 1979 and has handled over 150 such cases since. It has the distinction of being the first firm in the country to have appeared as counsel in an ICSID case.

Most of the team is based in Lisbon and Oporto but the wider firm has offices or joint ventures in several other Portuguese cities. In addition, it has built up a network of associated firms in Portuguese-speaking countries, of which the most significant for arbitration purposes are Mozambique, Angola and Brazil.

Portuguese construction companies feature heavily on the client list, often in connection with overseas infrastructure projects. But the firm has international clients too: it has acted for Getma (a unit of French logistics group NCT Necotrans) in a multifront dispute with Guinea; Irish building materials group CRH in an ICC matter; and Brazilian piping company Asperbras.

The firm also acts for states. It is defending Mozambique against a US$450 million claim brought by the former holder of a public infrastructure concession.

In 2014, the firm helped Getma win an award for more than €38 million against Guinea in a contractual dispute over a cancelled port concession in Conakry. The case was heard under the rules of OHADA, a pan-African institution based in Ivory Coast. However, the award has since been set aside by an OHADA court and denied enforcement in the US (see ‘Recent events’).

PLMJ obtained a good result in 2011 for CRH as respondent in an ICC case brought by Portuguese conglomerate Semapa over a call option for shares in a joint venture. Although the tribunal ordered CRH to sell its stake in the venture to Semapa, it rejected the claimant’s demand for a 10% discount on the share price as well as a damages claim for US$100 million. Semapa (which was represented by Freshfields) sought to have the award set aside in the French courts, but the award was upheld in the Paris Court of Appeal and most recently the Court of Cassation.

Besides the failure to enforce its OHADA award against Guinea, there was further disappointment for Getma in its parallel ICSID claim against the state. In August 2016, a tribunal refused jurisdiction over the vast majority of the claim, which had been brought under Guinea’s local investment law.

PLMJ hired a pair of academics as of counsel – Gonçalo de Almeida Ribeiro and Mariana França Gouveia. The latter is an arbitrator with public and private sector experience.

José Maurício Caldeira, a director of Brazil’s Asperbras, says that José-Miguel Júdice has “wide technical expertise” and an ability to “manage the proceeding according to the law and the client’s best interest.”

Paulo Marinho, legal counsel to Portuguese road developer Ascendi, tells GAR that PLMJ’s work is characterised by the team’s “interest, keenness and availability”. “Every email I sent, seven days a week, was answered the same day (sometimes the same hour).”

Margarida Novais, legal counsel at Portuguese construction company CME, says that the PLMJ team displayed a calm demeanour during the arbitration, refusing to be intimidated by the opposing side’s “aggressive and intimidating” approach.

PLMJ is a highly specialised, full-service and multidisciplinary law firm with almost 50 years of experience. PLMJ has more than 290 lawyers, including 55 partners. Most of the team is based in Lisbon and Porto, with offices or joint ventures in more 5 other Portuguese cities. PLMJ International Legal Network, currently operates to or in Angola, Mozambique, China, Brazil, the United Kingdom, Italy, Germany, European Nordic Countries and Switzerland, also focused on Clients of those markets interested in Portuguese speaking countries. PLMJ Arbitration is mostly focused in South and Central America, Africa (French and Portuguese speaking countries) and Iberia.

PLMJ Arbitration took it on its first arbitration in 1979 and has handled since then almost 200 cases as counsel and more than 80 as arbitrators, many of them international. PLMJ Arbitration currently has 22 lawyers including eight partners, of six different nationalities, and PLMJ is the only Portuguese law firm with an arbitration team independent from the litigation practice. Founding partner José-Miguel Júdice heads the team. He is one of the country’s few internationally recognised arbitrators. A member of the ICC Court for 7 years, Júdice is on the arbitrator lists of arbitrators of ICSID, PCA (The Hague) and other institutions in Brazil, Angola, Portugal, Spain, Mozambique and Korea. He’s also president of the Portuguese Chamber of Commerce’s Arbitration Centre and a board member of Spanish Arbitration Association.

Together, these lawyers have unparalleled experience in representing clients in arbitrations in five languages (Portuguese, English, Spanish, French and German) in a number of countries, and this truly international practice has allowed PLMJ to be considered one of the world’s 100 top law firms for arbitration by the well-respected Global Arbitration Review, the first Portuguese firm to have made it. 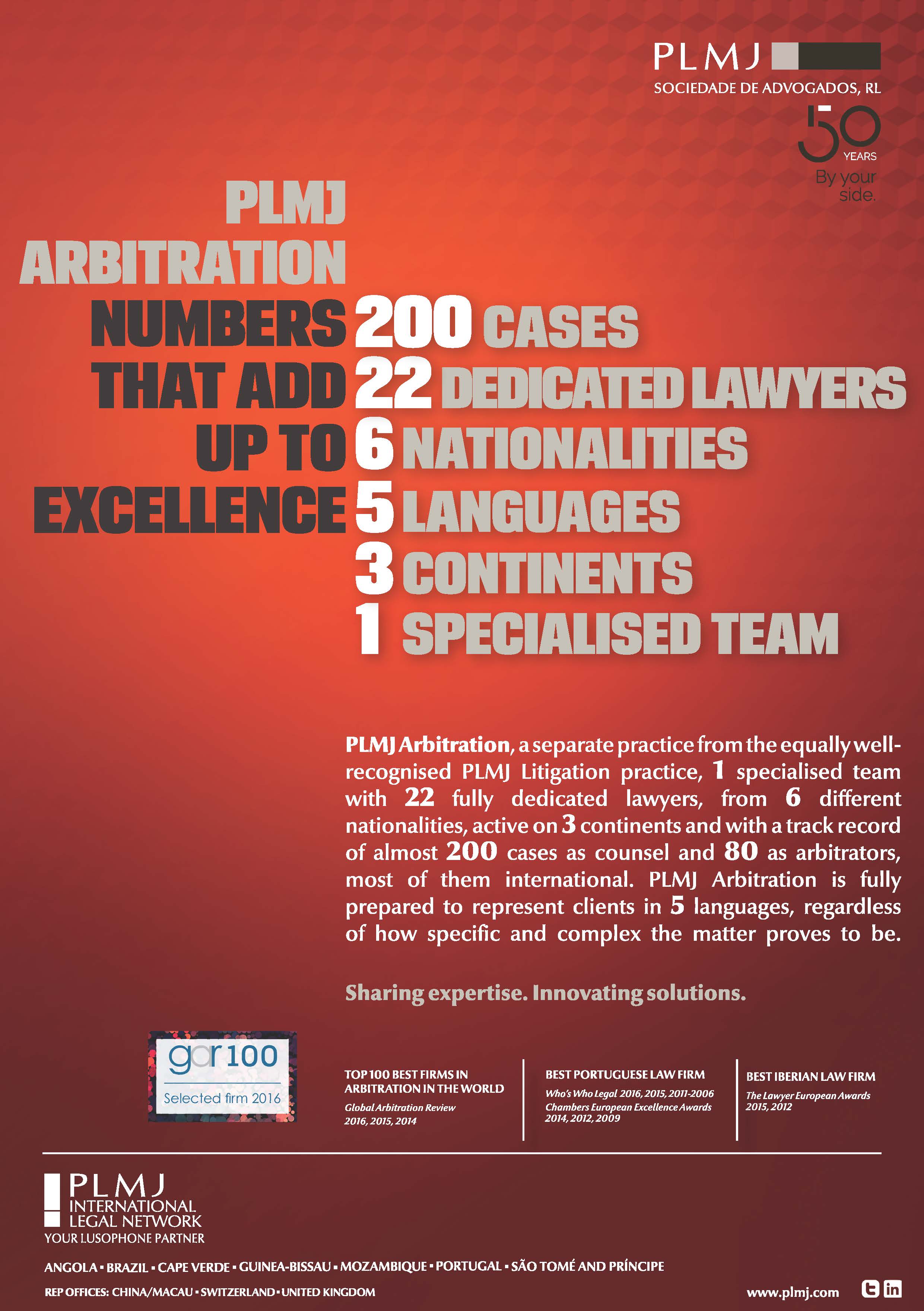