Wikborg Rein has practised international arbitration since its foundation in 1923, particularly in the area of shipping. It opened an office in Singapore in 2000 and a Shanghai office in 2002. It also has offices in Bergen, Oslo and London.

The London office expanded in 2010 with the hire of three English partners – Clare Calnan, Chris Grieveson and Robert Jardine-Brown – part of a strategy by the firm to follow its clients into the international arena. It reckons to be the largest non-UK specialist shipping law firm and the only Norwegian firm with a significant English law capability.

Other notable practitioners include Trond Eilertsen and Ola Haugen in Oslo and Øystein Meland in Bergen, who have all served as arbitrators.

Ukrainian state gas company Naftogaz has been using the firm since 2014 for various claims against Russia’s Gazprom under their long-term gas supply and transit agreements. The cases, reportedly worth a combined US$50 billion, are being heard at the Stockholm Chamber of Commerce (Swedish firm Gernandt & Danielsson is co-counsel to Naftogaz).

Outside its core areas of shipping, energy and offshore oil and gas, Wikborg Rein reports an increasing caseload in banking, defence and telecoms disputes.

In 2013, Oslo partners Dag Mjaaland and Aadne Haga won a gas price adjustment for a Czech affiliate of RWE against the export arm of Russia’s Gazprom in an ICC arbitration seated in Vienna. In 2012, the firm persuaded a different ICC panel to reduce the client’s “take or pay” obligations for gas purchased under the same contract.

Another success was in 2011 for Norwegian shipping group Odfjell, securing the enforcement of an SCC award worth US$44 million against Russian state-owned shipyard Sevmash in the courts of St. Petersburg.

In August 2016, it won a favourable award for a gas client, who was relieved from potentially onerous obligations for a 35-year period. The firm also represented a client in a major M&A dispute and in a shareholder dispute at the ICC.

There were two partner hires in London: Nick Shepherd, who formerly led Ince & Co’s office in Piraeus; and Mike Stewart from K&L Gates.

Eirik Thomassen, head of legal in the project department at Kvaerner, has high praise for the firm’s work on a complex dispute that encompassed a vast number of technical and commercial issues. “I think it is their good balance between attention to the details and a holistic approach that distinguishes them from other arbitration teams,” he says.

Thomassen also applauds Clare Calnan for her skilful management of the entire arbitration team – not just the lawyers, but the technical consultants, quantum experts, barristers from 4 Pump Court Chambers and the client’s own project team.

An in-house counsel at a multinational oil and gas company whose case settled before the hearings stage, singled out Mjaaland and Haga for their knowledge and experience in gas price review disputes. “They were certainly far superior to those of the lawyers assisting the defendant,” she says.

Wikborg Rein was founded as a one-man shipping law firm in Oslo, Norway in 1923, and celebrated its 90th anniversary in 2013 as a 240-lawyer full service firm with offices in Norway (Oslo and Bergen), Japan (Kobe), the UK (London), Singapore and China (Shanghai). Wikborg Rein's practice has been international since the very beginning, as the firm followed Norwegian clients, initially in shipping, and later in energy, banking and other industries, abroad. International arbitration has accordingly always been part of the firm's practice. Matters related to the shipping and offshore oil and gas industry remain a mainstay of Wikborg Rein's international arbitration practice. 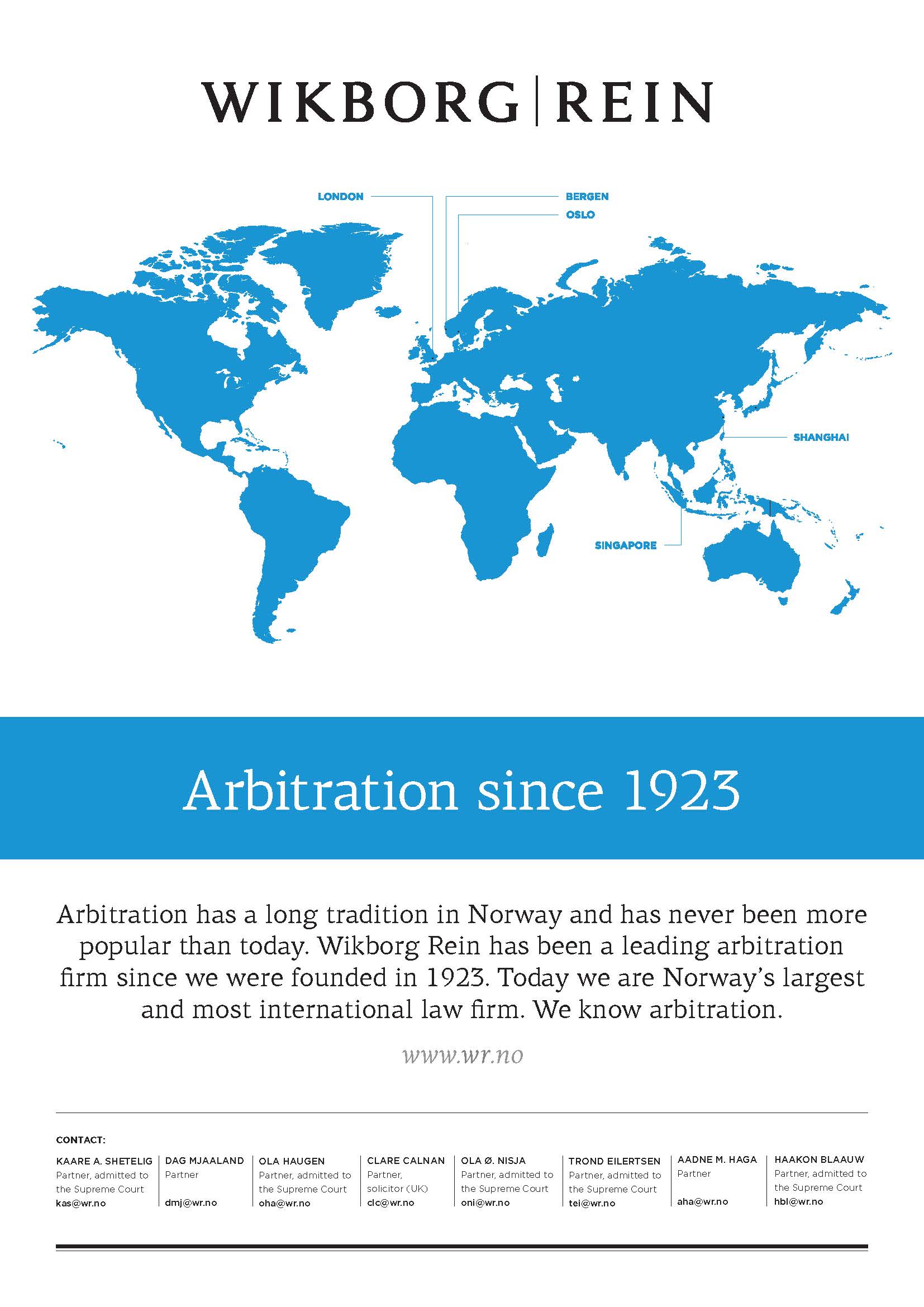