Bae Kim & Lee got serious about arbitration in 2002 at the suggestion of young partner Kap-You (Kevin) Kim. Since then, it has gone from respected co-counsel working with the big international names, to being one of those big names.

It did so in part by creating its own local opposition: each time Kim took part in an international case, he convened an event to share know-how with local rivals. Together, they promoted use of arbitration to their clients and an arbitration culture quickly developed in Korea.

More than a decade later, Bae Kim & Lee sits at the heart of Seoul’s impressively busy arbitration scene. With 25 specialist lawyers, including five partners, qualified in Korea, Australia, England and Wales, Singapore, Pakistan, India and the US, it is one of the largest dedicated practices in Asia. Its members are highly visible locally and on the global scale: the firm has put together a task force aimed at assisting clients caught up in litigation abroad, particularly in the US, and Kim is acknowledged to be a driving force behind Seoul’s effort to become an internationally recognised seat. The quality of its work has been summed up by Jan Paulsson as “worthy of Freshfields”, his former firm.

Bae Kim & Lee has also produced the first English-language textbook on the law and practice of arbitration in Korea (along with a similar volume in Korean), and hosts the annual Seoul Arbitration Lecture, attracting speakers of the calibre of David W Rivkin and Gary Born.

The team’s partners have begun to develop specialisms: Seunghyeon Kim and Matthew Christensen in construction, David MacArthur in engineering, and Sue Hyun Lim in investor-state disputes.

The arbitration practice is overwhelmingly Seoul-based, but the firm has longstanding offices in Beijing and Shanghai, and recently opened in Dubai, Hong Kong, Hanoi and Ho Chi Minh City.

Thanks to its incredibly strong brand, Bae Kim & Lee is one of the first ports of call for Korean entities facing foreign arbitration. Many are construction firms and automotive parts makers.

The past few years have brought more glamorous instructions. The firm launched what it suggests is the first ever investment treaty claim by a Korean investor against an African state. It is also co-counsel to the Korean government (alongside Arnold & Porter) in the first ever investment treaty claim against South Korea at ICSID, filed by US–Belgian private equity fund Lone Star.

It has been named as counsel to the organising committee of the 2018 Winter Olympics, to be held in the Korean resort of Pyeongchang.

Along with Debevoise & Plimpton, the firm picked up one of the first ever GAR Awards for its work on behalf of Hyundai Heavy Industries in an ICC dispute worth US$2.3 billion. It helped the client to enforce a punitive call-option in a joint venture agreement, thus allowing it to obtain full ownership of an oil refinery at a sizeable discount.

There have been plenty of favourable awards since. With co-counsel Addleshaw Goddard, it prevailed in 2015 in a US$100 million ICC case relating to a power plant project in the Middle East after succeeding in an interim application to restrain a threatened bond call. The same year it successfully defended a subsidiary of Korea’s largest electric utility against a US$50 million claim by a US supplier of nuclear power plant components, winning full costs.

In the investment treaty sphere, it settled two claims for Korean clients against two Asian states. High-profile ongoing matters include Ansung Housing’s claim against China – the first ICSID claim by a Korean investor and China’s only active case at the centre – and the defence of Korea against Lone Star’s claim. It is also acting for a Korean claimant in an investment treaty case against an African state.

On the commercial side, it won a US$53 million award for one of Korea’s largest retail distributors in a Singapore-seated ICC dispute. In another ICC case, the firm successfully defended a Korean state-owned enterprise from a US$180 million claim over its alleged failure to perform its purchase obligations under a government procurement programme.

It was retained by a Korean construction company for a US$300 million dispute with a state-owned oil company over a refinery upgrade in Trinidad and Tobago. Other pending cases include a US$95 million post-M&A dispute relating to a Chinese hypermarket chain, and a US$100 million ICC case relating to alleged defects in the largest heat recovery steam generator installation in the Middle East. 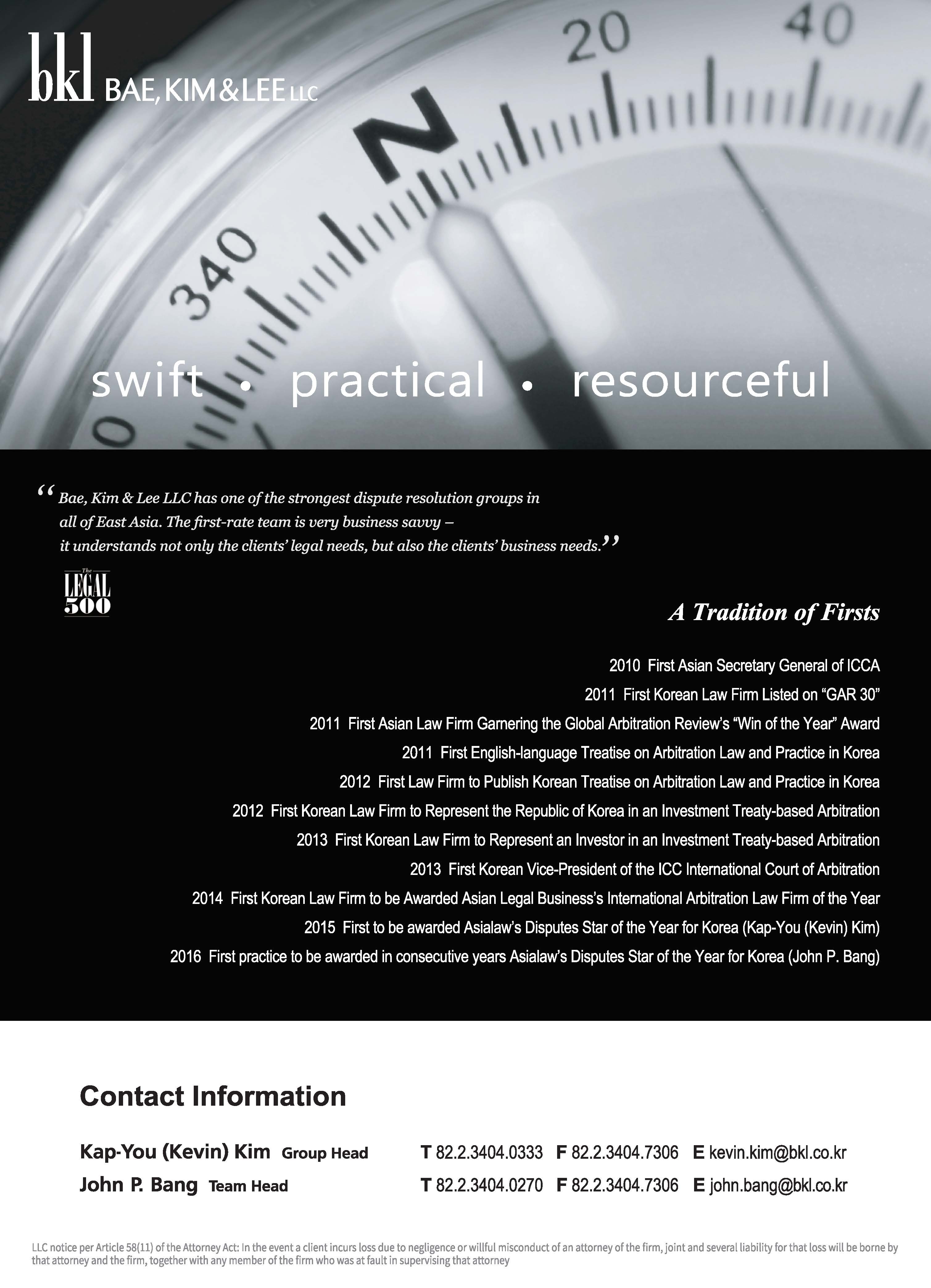