Acting for India’s Tata in a billion-dollar telecoms dispute

AZB was born in in 2004 from a merger between CZB & Partners in Mumbai and Ajay Bahl & Company in Delhi. Today the firm has five offices in India. It formerly enjoyed a “best friends” agreement with Clifford Chance.

The firm has moved away from Indian law firms’ traditional family-style structure and has been praised for its clear partnership track.

AZB’s reputation owes much to the personality and profile of founding partner Zia Mody. She spent three years as vice president of the LCIA and has acted in numerous cases under that institution’s rules, as well as those of the ICC, SCC, LMAA, SIAC and UNCITRAL. Percival Billimoria is another strong name who, like Mody, has a broad range of experience in other areas alongside arbitration.

In one of its highest-profile cases, the firm defended Tata Sons in an LCIA claim brought by Japan’s largest mobile operator NTT Docomo over a telecoms venture. The arbitration ended in June 2016 with an award against Tata worth US$1.17 billion. AZB is now helping Tata to resist enforcement of the award in India.

In 2015, the firm defended Swiss luxury goods group Richemont in proceedings filed by an Indian distribution partner, successfully persuading the Indian Supreme Court to refer the claims to arbitration. It also convinced the court to quash parallel criminal proceedings filed against the client.

AZB has represented leading corporate houses and multinationals in multi-jurisdictional arbitration matters governed by various rules including those of the ICC, UNCITRAL, Swiss Chambers of Commerce, London Maritime Arbitrators Association, Singapore International Arbitration Centre and London Court of International Arbitration. The Firm has also been involved in arbitration proceedings under foreign laws such as New York law and English law where Indian law issues underscored the arbitration proceedings, in addition to numerous arbitrations sited within and outside India governed by Indian law.

The Firm has handled complex commercial litigation and arbitration including advising in filing and defending interim applications in courts and before tribunals, conducting cross examination and trials of intricate questions of law and fact which are landmark decisions in the development of the law. In addition, the experienced litigation and arbitration team of the Firm also advises clients who get dragged in white collar criminal proceedings, often an offshoot of the civil proceedings.

Zia Mody has been recognized as one of the “World’s Leading practitioner” for Commercial Arbitration by Who’s Who Legal 2016. She was Vice President on the London Court of International Arbitration (2010 - 2013). Legal 500 2016 says about AZB “Without doubt, a powerhouse in the dispute resolution arena, AZB & Partners is adept in commercial litigation and arbitration” and partners Percival Billimoria and Rajendra Barot have been highly recommended for their Litigation & Arbitration practice. Chambers & Partners 2015 says about Percy, "very experienced litigation lawyer" and highlight his "impressive capability for quickly grasping the content of the matter." Rajendra is also highly regarded for both litigation and arbitration work by Chambers & Partners 2015.

The Firm has advised a world leader luxury brand (“Client”) in its disputes with its distributor in India. In spite of arbitration clause providing for Swiss law governed ICC arbitration seated in Switzerland, the distributor filed a suit in Indian courts and also filed a criminal complaint making allegations of criminal breach of trust and criminal conspiracy. AZB advised the Client and argued the application before the trial court seeking dismissal of the suit in view of the arbitration clause. As a result of persistent efforts, the suit was dismissed within less than 5 months. The order of dismissal was upheld by the Supreme Court of India and the Supreme Court also ordered closure of the criminal case. 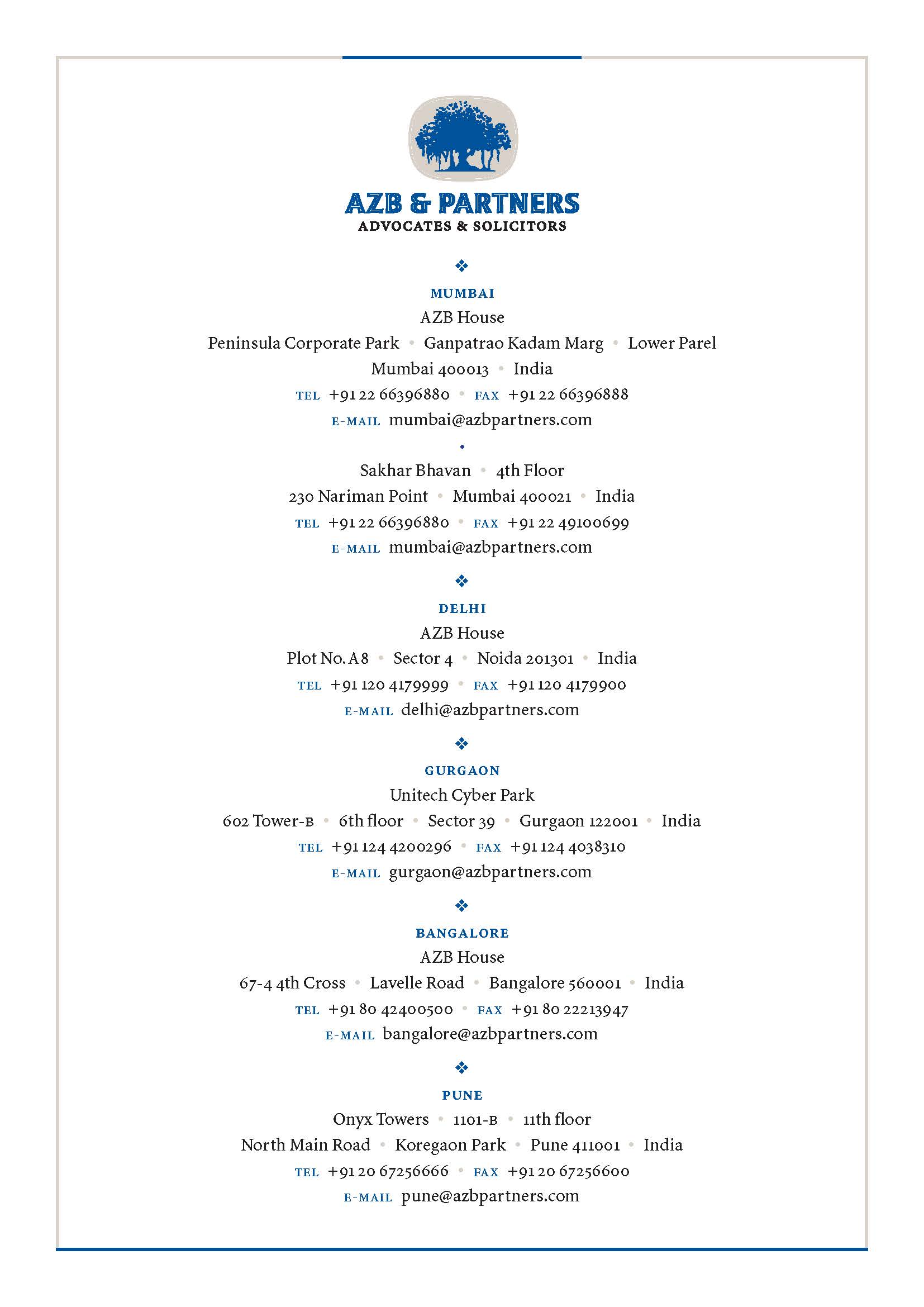