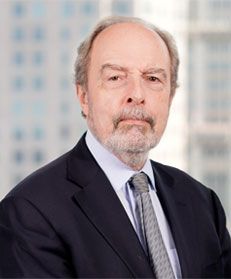 Trevor Cook is an English solicitor with nearly 40 years’ experience in intellectual property, and notably, global patent litigation. In 2014 Mr Cook joined WilmerHale in New York from Bird & Bird LLP in London, where he had been a partner since 1981. He is chairman of the British Copyright Council and spent several years as president of the UK group of the International Association for the Protection of Intellectual Property (AIPPI). He is on the World Intellectual Property Organization (WIPO) list of arbitrators. In addition to numerous articles and book chapters, Mr Cook has authored the following books: A User’s Guide to Patents (Butterworths 2002; Tottel 2007; Bloomsbury 2011, 2016);  Pharmaceuticals Biotechnology and the Law (Macmillan 1991; LexisNexis Butterworths 2009, 2016); EU Intellectual Property Law (Oxford 2010); The Protection of Regulatory Data in the Pharmaceutical and Other Sectors (Sweet & Maxwell 2000); and A European Perspective as to the Extent to Which Experimental Use, and Certain Other, Defences to Patent Infringement, Apply to Differing Types of Research (Intellectual Property Institute 2006). He is a co-author of Practical Intellectual Property Precedents (Sweet & Maxwell 1998 to date); and International Intellectual Property Arbitration (Kluwer 2010). He is one of the general editors of The Modern Law of Patents (LexisNexis Butterworths 2005, 2009, 2014) and is editor of Sterling on World Copyright Law (Sweet & Maxwell 2015) and of Trade Secret Protection – A Global Guide (Globe Law & Business 2016).