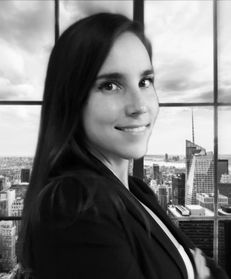 Paola Aldrete was formerly a senior associate in the international arbitration and litigation practice at Galicia Abogados, where she worked alongside Cecilia Azar for over 10 years. For over a decade, she has focused her practice on transnational and local arbitration proceedings (institutional and ad hoc) acting as counsel, arbitrator and secretary of the arbitral tribunal particularly in cases relating to construction, infrastructure and shareholders’ disputes. Prior to joining Galicia Abogados, Ms Aldrete worked in an international law firm in New York as a foreign associate in the arbitration practice. The Legal 500 recognised her as ‘Rising Star’ in International and Who’s Who Legal has recognised Paola as a ‘Future Leader’ in International Arbitration.

Ms Aldrete obtained her law degree from ITESM (2013) and her master’s degree in international legal studies with a certificate in international arbitration and alternative dispute resolution from Georgetown University (2017). She is the editor of Legislación Mexicana de Arbitraje (Editorial Porrúa, 2015). She is a member of the executive committee of the Arbitration Commission of the Mexican Bar Association, representative of Mexico in ALARB Siguiente Generación and a member of the ICC Arbitration Anticorruption Task Force. Ms Aldrete is a founding member of Mexico Very Young Arbitration Practitioners (MXVYAP) and of the Georgetown Law Association of Mexicans.

Paola is now an independent practitioner at Aldrete Arbitration.