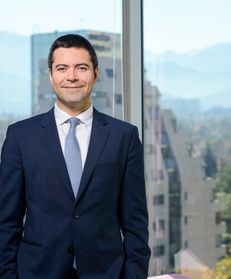 Co-head of the firm’s disputes resolution practice. He specialises in litigation and arbitration, both domestic and international. He began his career working at Carey and Philippi. He worked also at Chadbourne & Parke LLP, NY office, international arbitration practice, and co-founded the arbitration department of PPU Chile. His work has been mainly focused on disputes in the mining, energy, M&A and construction field. He worked at BHP Billiton as the major projects dispute manager in Chile under a secondment programme. In such a capacity, he administered all the disputes of the company’s major projects department. He obtained his law degree from Universidad de Chile law school, summa cum laude, and has an LLM from Columbia University on a Fulbright scholarship. He has taught private law at Universidad de Chile since 2007, where he is currently a faculty member. Francesco is also a usual speaker in International Arbitration conferences in the Latam Region, member of the ICC arbitration & ADR Commission, and is an alumnus of the 2016-2108 ICC Advanced Arbitration Academy for Latin America. Francesco has been distinguished by Chambers Global, The Legal 500, Who’s Who Legal, Leaders League, Best Lawyers and Leading Lawyers in the dispute resolution area. He has acted as arbitrator in ICC arbitration and belongs to the pool of arbitrators of CAM Santiago. He also has experience as disputes board member.