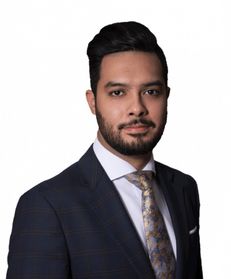 Ahmed has been in the legal profession since 2015. Prior to joining the firm, he was part of the leading law firm in Pakistan, where he worked in the dispute resolution and advisory departments on civil and commercial law matters.

Ahmed is a qualified barrister in England, having been Called to the Bar by Gray’s Inn in 2015, and a licensed Advocate of the Punjab Bar Council in Pakistan.