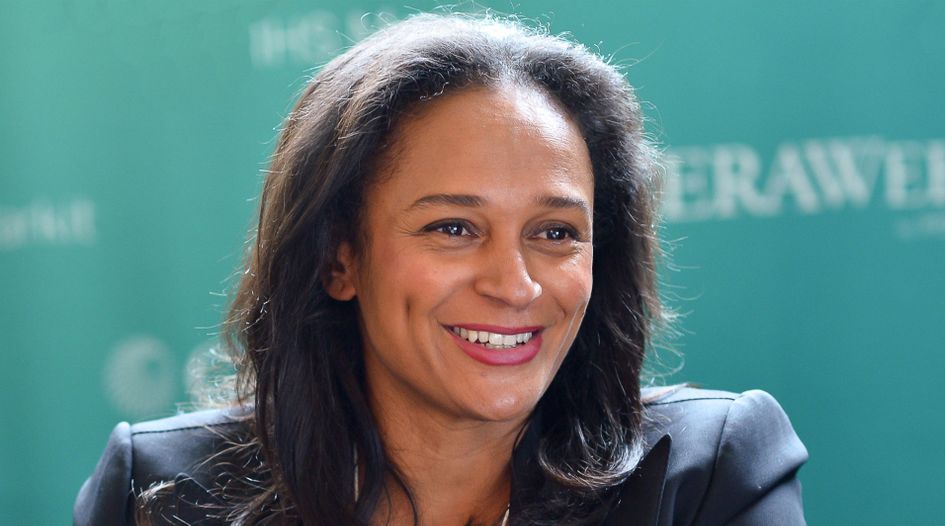 A company owned by Angolan billionaire Isabel dos Santos has lost a final appeal in the French courts relating to a US$646 million award, failing on arguments that the ICC was wrong to appoint all five members of the tribunal itself or that an arbitrator failed to disclose potential conflicts.

On 9 November, the Court of Cassation rejected the appeal by dos Santos’ BVI-registered company Vidatel and upheld a Paris Court of Appeal decision from last year confirming the award in favour of Portuguese entity PT Ventures (PTV).

A five-member tribunal consisting of Klaus Sachs as chair, Bernard Hanotiau, David Arias, Marcelo Roberto Ferro and Luca Radicati di Brozolo issued the award in 2019 in a Paris-seated arbitration between four shareholders in Angolan mobile operator Unitel. The award upheld PTV’s claims against the other shareholders and found them jointly and severally liable.

PTV was majority owned by Brazilian telecoms group Oi at the time of the arbitration but has since been acquired by Angola’s national oil and gas company Sonangol.

White & Case partner Christophe von Krause, who acted for PTV in the arbitration and set-aside proceedings, says the Court of Cassation decision is a “strong victory and a vindication” for his client. He calls it a “landmark decision clarifying two major issues in French arbitration law: the power of the ICC to appoint a tribunal, and the scope of an arbitrator’s duty of disclosure”.

Philippe Pinsolle of Quinn Emanuel Urquhart & Sullivan, who has been counselling dos Santos’ company in the set-aside proceedings, says the decision is “regrettable but unsurprising given the unfailing support of the French courts for the ICC”.

Each of the four shareholders had a 25% stake in Unitel and was party to a shareholder agreement concluded in 2000. The other shareholders were Mercury, another subsidiary of Sonangol; and Geni, which is owned by a retired Angolan general.

PTV filed its ICC claim against the other shareholders in 2015. In its award four years later, the tribunal found Vidatel, Geni and Mercury jointly and severally liable to compensate PTV for the decrease in the value of its stake in Unitel and for the mobile operator’s failure to pay dividends to PTV. It awarded US$646 million out of the US$3 billion PTV had claimed.

Last year, the Paris Court of Appeal upheld the award, rejecting Vidatel’s arguments that the ICC had failed to appoint the five-member tribunal in accordance with the arbitration agreement, and that arbitrators Sachs and Ferro failed to disclose facts that called into question their impartiality.

ICC within its rights to appoint entire tribunal

In its challenge to the award, Vidatel complained that the tribunal was improperly constituted because the ICC had not followed the procedure laid out in the arbitration agreement, which provided for each party to appoint an arbitrator and for the chair to be chosen jointly by the four party-appointed arbitrators.

PTV argued that in this case, where the other three parties had converging interests, appointing the tribunal in this manner would violate the key French arbitration law principle of equality, because PTV would have one arbitrator facing three, and the fifth arbitrator would be unable to make a casting vote. The ICC accepted this view and appointed all five members of the tribunal itself.

In its latest appeal, Vidatel argued that the principle of equality, in the context of a four-party arbitration agreement, should mean only that the parties have the same rights in appointing arbitrators, independent of whether the parties’ interests were aligned or divergent.

The Court of Cassation found that under French civil procedure law, where parties in a multiparty arbitration cannot agree on the method of appointing the tribunal, the person in charge of administering the tribunal or supporting judge should appoint the arbitrators.

It also found that in this situation, under the ICC rules incorporated in the arbitration clause, the ICC had the authority to appoint each of the tribunal members.

Finally, it observed that where the ICC appointed each arbitrator, all parties were deprived of the right to choose their arbitrator, and so  equality was preserved between them.

Vidatel further challenged the award on the grounds that Sachs and Ferro failed to disclose potential conflicts. It complained that Sachs had not disclosed the fact that a partner at CMS, his law firm, was a bankruptcy trustee of another subsidiary of Oi.

The Paris Court of Appeal rejected this on the basis that Sachs and his colleague worked for financially independent firms with the CMS network and PTV was not directly linked to the other Oi subsidiary. Vidatel did not pursue the allegations against Sachs in its cassation appeal.

As for Ferro, Vidatel maintained the Brazilian arbitrator should have disclosed that he and his firm Ferro Castro Neves Daltro & Gomide regularly acted for Nelson Tanure, a businessman described as an “influential” minority shareholder in Oi at the time; and for Bank of New York Mellon, a provider of financial services to Oi.

The Court of Cassation found that that the Court of Appeal acted within its authority in concluding Ferro’s work for Tanure and the bank did not create reasonable doubts about his independence.

It observed that the facts raised by Vidatel did not concern Ferro’s relationship with PTV Ventures or even with Oi but rather with a minority shareholder in Oi. As for the relationship with BNY Mellon, the court said the bank “did not appear to have any converging interests with Oi or any interests linked to the outcome of the arbitration”.

Von Krause tells GAR that it is unusual for the Court of Cassation to refer to the facts in a decision already made by the Court of Appeal, and that this suggests “implicit agreement that the facts were too remote to raise doubts as to the impartiality and independence of the arbitrator”. He says that this provides “useful guidance for arbitrators” on their responsibilities.

The High Court of the British Virgin Islands already enforced the award in 2020, similarly dismissing Vidatel’s claims that the tribunal was improperly constituted and that Sachs and Ferro failed to disclose conflicts of interest.

Vidatel is also pursuing two further ICC arbitrations. In one, it seeks damages from PTV for events following the 2019 award, alleging that PTV has recovered its shareholder rights despite being compensated for the loss of them in the award. In the other arbitration, It is also seeking payment from Mercury of at least one-third of the 2019 award.

Dos Santos, the eldest child of Angola’s former president Eduardo dos Santos, was once regarded as Africa’s richest woman but has recently found herself in legal trouble. In 2020, the “Luanda Leaks” saw the publication of 715,000 documents relating to her business dealings. This triggered a wave of criminal investigations, regulatory probes and civil suits across several jurisdictions, concerning allegations she and her late husband obtained their fortunes through embezzlement and theft of Angolan state assets. She denies any wrongdoing.

In September last year, a Dutch company beneficially owned by dos Santos was placed into bankruptcy in the Netherlands after an arbitral tribunal found it had acquired assets worth €650 million through “grand corruption”.

Before the French Court of Cassation

Before the Paris Court of Appeal

In Vitadel’s ICC claim against Mercury